Aircraft manufacturer Boeing (NYSE:BA) has more than 12,000 commercial planes in service carrying passengers and cargo. Its strong product portfolio includes the 737 family, 747 jumbo jet, the 747-8 family, 767 models, the 777, and the 787 Dreamliner. Here's the lowdown on Boeing's top two aircraft that played a huge role in making the company what it is today.

The fact that the 737 family is Boeing Commercial Airplanes' highest-selling plane should come as no surprise. But not many know that the 737 is the first commercial jetliner to cross the 10,000-order mark -- achieved in 2012. The first 737-100 was delivered to Lufthansa in 1967, and it entered full service in 1968. 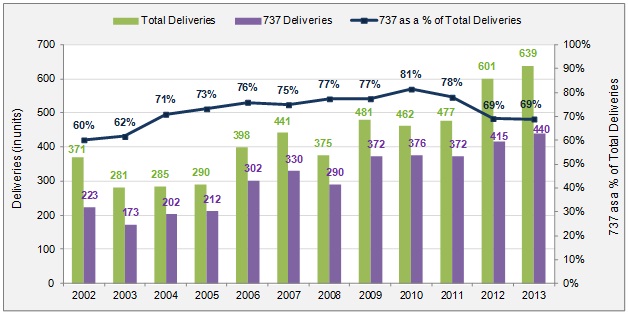 737 airplane deliveries over past 12 years. Chart made by author.

Boeing's backlog ended June 30 stands at 5,237, of which every three of four aircraft orders are for the 737. According to Boeing's website, it received gross orders for 604 of the jets through July 22, 2014, which tallies net orders at 550, adjusted for 54 cancellations. To manage the mounting 737 backlog and ensure timely delivery, the production level has been ramped up from 38 jets a month to 42, and will be further increased to 47 a month in 2017. At current production rates, Boeing's single-aisle backlog translates to more than seven years of production. Serving passengers for more than four decades, the jet's order flow remains steady, with a seemingly bright future.

Boeing forecasts that demand for new planes between 2014 and 2033 will be 36,770, and 70% of this will be for single-aisle jets. So, 737 will get its fair share of orders, continuing to support the company's top- and bottom-line growth.

The wide-body 777
The 777, Boeing's second-highest-selling jetliner in the past 12 years, is extremely popular among airlines across the globe. The twin-engine, wide-body aircraft has five passenger versions (accommodating between 305 and 440 passengers), and a freighter variant. The 777 program's roots go back to 1990, the year of its launch. The jet entered service in 1995, flown by United Airlines. 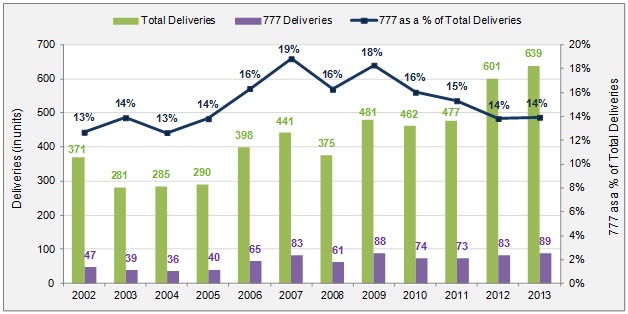 777 airplane deliveries during past 12 years. Chart made by author.

At present, the American aero major is developing 777's successor, dubbed the 777X, which would consume 12% less fuel compared with competing planes. The company is scheduled to commence 777X production in 2017, with its first delivery slated for 2020.

The 777 has a firm backlog for 339 jets as of June 30. And in early July, Boeing bagged a historic order win worth $56 billion to deliver 150 of the 777X to Emirates. The company's website shows that the jet maker received net orders for 219 777s in 2014 through July 22, which includes the Emirates' order. At the current production level of 8.3 a month, the 777 backlog will clear in more than three years, and Boeing is expecting to make a smooth transition to the 777X.

Boeing CEO Jim McNerney is confident of filling the gap, as delivery slots are packed till 2017. Marketing vice president Randy Tinseth said, "There's no question it will be a challenge -- we have three years of production [to fill] and we have six years to do it." The 777 is one of the strongest products in Boeing's portfolio. With the 777X, the company's dominance in the wide-body segment is poised to be further cemented.

The crux
The 737 and 777 respectively embody the company's success in the narrow-body segment and its supremacy in the wide-body space. With the reengineered versions of the two aircraft, Boeing is solidifying its competitive edge. Though developmental risks are unpredictable, the fact that the newest editions are updated variations of the existing models minimizes pitfalls. These two best sellers have been Boeing's trump cards, and will continue to take the aero major to newer heights.