Twitter (TWTR) is going after Facebook's (META -1.19%) bread and butter, catering to small and medium-sized businesses, or SMBs, with new results-based advertising rates. Facebook already offers similar options for clicks, likes, app installs, and more and has been incredibly successful at attracting SMBs.

The reason Facebook has been so successful with SMBs isn't its ad price structure. It's because Facebook's focus is significantly different from Twitter's. Twitter describes itself as a "real-time information network"; Facebook is "the social network."

Although Twitter could be a powerful tool for businesses to connect with customers, management isn't focused on that capability. If it wants to win more advertisers, though, changing that focus may be its best option.

Small businesses flock to Facebook
Facebook is extremely attractive to small businesses. It provides owners with the ability to quickly and easily create a Web presence, tell the world about its business, and engage with customers. Twitter, comparatively, provides very little space to describe a business and focuses less on attractive pictures -- although the updated profile pages have helped.

As of the end of last quarter, 30 million businesses had a Facebook page, and that number is growing quickly. Over the past year, the number of active businesses on Facebook increased by 12 million, or 67%. Twitter has just 4.5 million small-business accounts on its network.

Of course, Twitter has a smaller user base than Facebook. It's about one-fifth the size of Facebook, but it has just about one-seventh the number of business accounts.

If anything, Twitter's openness indicates that the ratio of businesses to users on Twitter ought to be higher than on Facebook. People go to Twitter to see what's going on; businesses are there producing content and connecting with customers.

Twitter hasn't given any hard numbers on its advertising customers but says it has "thousands" of advertisers. That vagueness is less than inspiring, probably indicating that Twitter's penetration of businesses is sub-par. 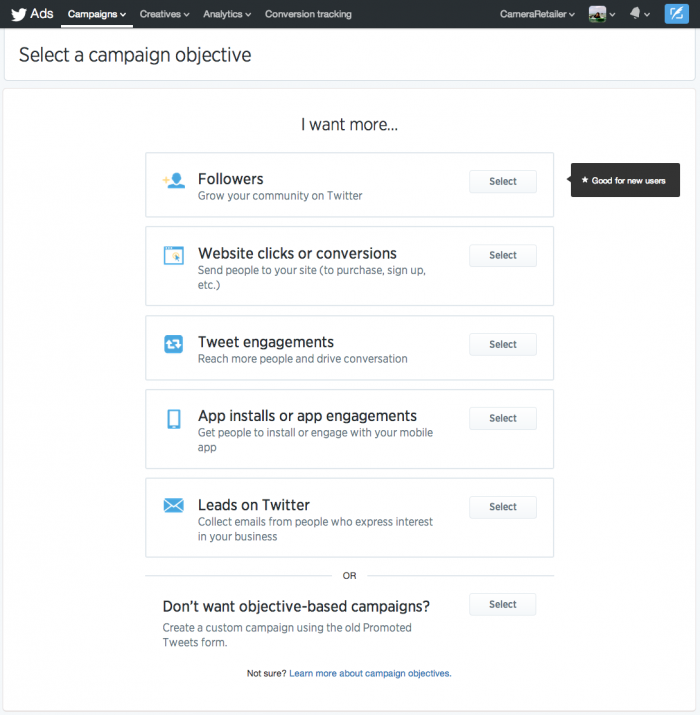 Twitter aims to change that with its new ad-pricing structure. SMBs are attracted to results-based pricing because it gives them a much clearer view of their projected advertising return before they sink their entire budget into a campaign.

While the new ad-buying tools may help convert more businesses already on Twitter into advertisers, it's not clear whether it will increase the total number of businesses on Twitter. If management can show more successful cases of small businesses advertising on Twitter, perhaps more businesses will move to the platform.

Connecting, not informing
The best ads are those that connect with the audience. Facebook plays up its ability to "connect everyone" -- it's one of its three biggest goals -- and businesses love it. The funny thing is, Twitter has just as much ability to connect people, if not more. Twitter makes public figures and businesses quickly and easily available to the public.

Yet if you listened to Twitter's earnings call, you'd notice that it was devoid of mentioning how Twitter can connect people. That's in stark contrast to Facebook, where "connect" is an essential part of the vocabulary. If Twitter wants to win more advertisers, it needs to copy more than ad-pricing tools from Facebook; it needs to copy Facebook's focus on connecting people.