The wireless carrier industry is getting even more cutthroat. Spurred by rock-bottom pricing from T-Mobile (NASDAQ:TMUS), the larger carriers like AT&T and Verizon have responded and changed plans over the past year just to keep up. But it's Sprint (NYSE:S) that's taken the biggest hit as subscribers jump to T-Mobile's alluring plans.

Instead of ceding to its rivals, Sprint jumped into the ring this week with some new pricing plans of its own.

A fresh start
Sprint's newest plan offers unlimited talk, text, and 20GB of shared data, for up to 10 lines, for just $100 per month. The price pops up to $160 per month at the end of 2015, matching the cost of both Verizon's and AT&T's plans, which offer only 10GB per month. Sprint's also throwing in an additional 2GB per line, for up to 10 lines.

For a limited time, Sprint's giving new customers a $350 pre-paid card to put toward early termination fees when they switch to Sprint's plan. The move comes as Sprint's new CEO, Marcelo Claure, said last week that cutting prices would be a top priority.

Sprint is trying to reverse its decline in subscriber growth amid fierce wireless competition. In the most recent quarter ending in June, the company posted $8.79 billion in revenue, with $23 million in net income -- its first profitable quarter in more than six years.

In its fiscal Q1 Sprint also slowed some of its previous customer hemorrhaging, losing 334,000 net customers, compared to more than two million it lost a year ago.

But losing more than a quarter of a million customers in a quarter is not great news. Especially when Sprint's smaller rival, T-Mobile, posted 1.5 million net customer gains over the same period. T-Mobile is inching very close to the No. 3 U.S. wireless carrier spot, with 50 million customers now.

Let's take a quick look at the subscriber quarterly net subscriber gains for the four major carriers since 2012: 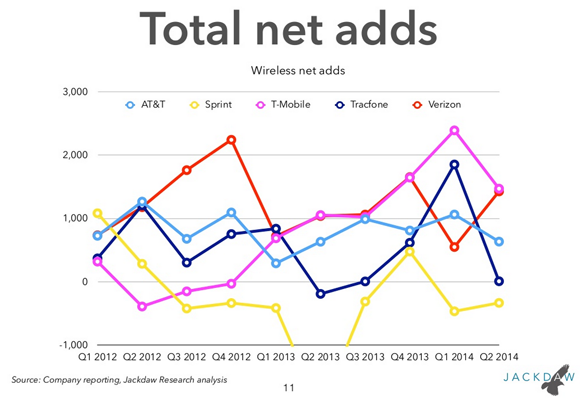 T-Mobile has clearly added to its subscribers over the past few years, while Sprint's quarterly net adds are moving in the wrong direction.

But aside from T-Mobile's gains, the company's network is also starting to beat Sprint's.

Losing more ground
This week, RootMetrics put out a report showing the overall performance of T-Mobile's network leapfrogged Sprint's, compared to the same study last year. Verizon took the top spot away from AT&T, while T-Mobile took the No. 3 spot, and Sprint fell to last place. T-Mobile also beat Sprint in the speed tests, data performance, and call performance. 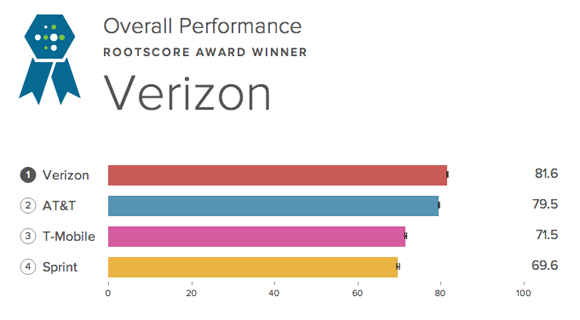 The report said, "T-Mobile's improvement is also clearly seen when looking closely at how it compared to Sprint in our last study versus this round of testing. In the second half of 2013, T-Mobile finished last in five out of our six categories. This time, T-Mobile jumped over Sprint and finished in third place in four categories."

RoboMetrics noted Sprint could easily win back the speed test when more of is faster Spark tri-band technology goes online.

Foolish thoughts
Sprint's latest data plan announcement should be a step in the right direction for the company, in part because it mirrors how T-Mobile has gained so much ground over the past few years.

But now that it's completely dropped all plans for a possible takeover of T-Mobile, it'll have to match the "uncarrier's" offers as closely as possible. T-Mobile's momentum appears unstoppable at the moment, and its slew of new announcements -- including a new $100 per month family plan in July -- means Sprint needs to continue bringing innovative plans to market. Sprint says it'll have yet another big announcement later this week, so it might just be on the right track.