Arjun Sreekumar
(TMFArcher)
Author Bio
Arjun is a value-oriented investor focusing primarily on the oil and gas sector, with an emphasis on E&Ps and integrated majors. He also occasionally writes about the US housing market and China’s economy.

When it comes to energy, Germany is a bit of a conundrum. It's a global leader in renewables usage, having increased the share of renewables in its total energy consumption from 6% to an impressive 25% over the past decade. Yet it's also a heavy user of coal – a fact that's glaringly inconsistent with its sustainable energy leadership.

What's even more surprising, however, is that Germany is actually the biggest importer of natural gas from Russia. According to BP's latest annual review, it imported close to a whopping 40 billion cubic meters of gas from the Russian Federation in 2013. That places it well ahead of even Ukraine, which imported about 25 billion cubic meters, as the chart below shows. 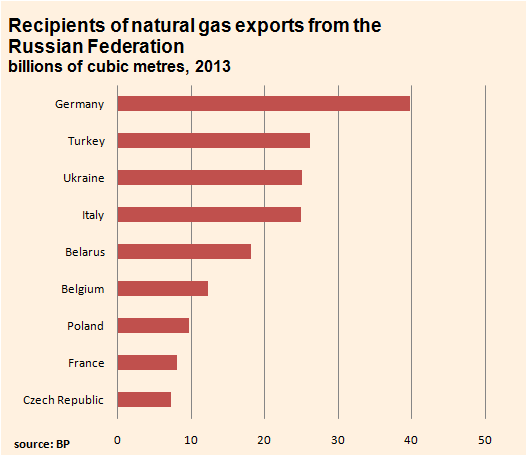 Germany relies on imports to supply more than 70% of its domestic energy demand, with Russia alone representing a quarter of the country's imports of natural gas, oil, and coal. According to the International Energy Agency, Russia supplies about 38% of German gas imports, 35% of oil imports, and 25% of coal imports.

That dependence makes Germany particularly vulnerable to any supply disruptions that prevent Russian gas from flowing across its borders. It's not surprising, then, that Chancellor Angela Merkel has been especially circumspect in her dealings with Vladimir Putin; she knows that Russia has the upper hand. If Russian supplies were cut off for any number of reasons, Germany has only three options left, none of them particularly attractive.

Boosting European imports and US LNG
The first option for Germany is importing more gas from Norway and the Netherlands, which are its biggest gas suppliers along with Russia. This is perhaps the best short-term option since gas supplies from these countries are shipped to Germany via low-risk pipelines. But over the long run, Norwegian and Dutch gas shipments likely won't be enough to supplant Russian imports because that gas is produced in the North Sea, where production is believed to be in secular decline.

The second – and most widely discussed – option is to import liquefied natural gas (LNG) from major gas-producing countries like Qatar and the US. But that possibility faces some major hurdles. Firstly, US LNG exports won't take off in earnest for at least another few years, and even when the first export project – Cheniere Energy's Sabine Pass facility in Louisiana – goes into service, its exports will be destined for other countries that have secured those supplies through long-term binding contracts.

Even if Germany manages to ink a long-term contract with another LNG exporter, it doesn't have the necessary infrastructure like unloading terminals and regasification plants to handle large volumes of imported LNG. Further, it'll be difficult to find a supplier who can deliver sufficient volumes at short notice, especially given rapidly growing global demand for LNG.

The domestic fracking option
The third, and most controversial, option is to drill for gas within German borders using hydraulic fracturing, or fracking, the drilling technique that helped revolutionize US hydrocarbon production. According to the country's Federal Institute for Geosciences and Natural Resources, Germany contains up to 2.3 trillion cubic meters of shale gas, enough to supply domestic demand for up to a century.

But political and environmental opposition are the biggest impediments to harvesting these vast reserves. In fact, under a proposal announced last month by German Environment Minister Barbara Hendricks, Germany is looking to ban most forms of fracking until 2021. For a country that has the requisite infrastructure to produce and distribute gas domestically, the proposed move would be a major blow to reducing its dependence on the Kremlin.

The bottom line
Given its excessive reliance on Russian gas and the shortage of viable alternatives, Germany may want to reassess its energy future. If the country decides to prohibit fracking until 2021, as Hendricks has proposed, it will become increasingly vulnerable to any shortfalls in Russian gas supplies. For Europe's leading economic superpower, giving Putin that kind of geopolitical leverage may be a risky move.

Can You Guess Which Country Depends Most Heavily on Russian Gas? @themotleyfool #stocks Next Article
Current