This article originally appeared as part of ongoing coverage in our premium Motley Fool Stock Advisor service...we hope you enjoy this complimentary peek!

Offshore drilling rig owner Seadrill (NYSE:SDRL) reports earnings on Wednesday, Aug. 27, before the market opens, and this will be a key report for the company in 2014. The offshore drilling industry has gone through something of a slump early in 2014, and stock prices have struggled as a result. But Seadrill and its peers have said they expect drilling activity and contracting to pick up later this year, which will be necessary to keep the company's eye-popping 11.1% dividend yield alive.

Here are two keys items to watch when earnings are released.

Will the drilling market improve in 2014?
Across the board, offshore drilling rig owners have said the first half of 2014 was weaker than they expected. Exploration and production companies have had little appetite to tie themselves to multiyear contracts that can cost billions of dollars in an uncertain energy market with geopolitical risks all over the world.

But most drilling companies also expect the second half of the year to be better and have a strong long-term outlook, particularly in ultra-deepwater. There is good reason for this bullishness, because more than three-quarters of the new oil discovered last year was offshore, and over half of it in ultra-deepwater, Seadrill's wheelhouse. But that long-term optimism doesn't mean drilling results will be smooth from quarter to quarter, and the industry is seeing the downside of that lumpiness right now. 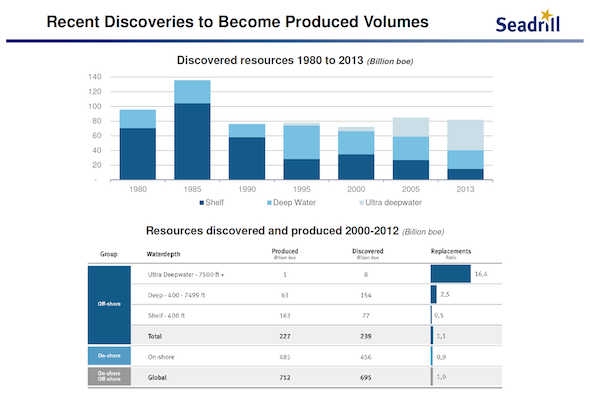 What investors should be watching for in the second quarter is both tangible and intangible (according to management's comments) evidence that the drilling market is picking up. Seadrill just signed a contract for the newbuild West Saturn drillship, which will be completed in September, so that's a tangible positive for the company. The two-year contract is with an ExxonMobil (NYSE:XOM) subsidiary for $497 million, with a one-year extension option. The potential dayrate of $680,000 would be among the highest the company has ever received.

More evidence that these dayrates will be the norm for newbuilds completed over the next year and a half would certainly help the stock.

Dropdowns improving Seadrill's balance sheet
One key development for Seadrill over the past year was the launch of Seadrill Partners (OTC:SDLP.F), a company that owns rigs and pays a consistent distributions to investors, much like an MLP. The goal with Seadrill Partners was to find a way to push assets down to an affiliated company to generate cash while maintaining an economic interest in the rigs. You can find a good explanation of the very complex corporate structure from fellow Fool Daniel Gibbs here.

The cash generated from such a venture isn't trivial, even for a $17.3 billion company like Seadrill. Cash proceeds from dropdowns were $356 million for the West Sirius and West Leo drillships and another $350 million for West Auriga, which is being used to reduce debt at Seadrill's level. In the first quarter, total cash increased $206 million to $1.12 billion and debt fell $1.08 billion to $12.39 billion.

Deleveraging the balance sheet is key because Seadrill must pay for 20 new rigs under construction, along with an 11.1% dividend yield that investors are counting on. Without the ability to raise cash through dropdowns to Seadrill Partners it's possible Seadrill would have to go to equity markets to raise cash, or lower the dividend, which would likely be a negative for the stock.

Progress on the balance sheet will be key to continue throughout 2014, because even the most aggressive dividend investors has to be a bit squeamish about the ever-expanding dividend yield and upcoming newbuild spending.

The modern fleet will put Seadrill in a strong position
One thing very evident in today's offshore drilling market is that having a new, technically advanced fleet of drilling rigs will put a company in better position than its competitors. So far, Seadrill hasn't had the same revenue and earnings volatility as competitors, in large part because of that new, technically advanced fleet with a focus on ultra-deepwater.

Investors need to make sure that the long-term investment thesis stays intact, with improving contract activity in late 2014 and into 2015 and strong dayrates that make Seadrill's strong returns possible. Check back to Fool.com for our take once earnings are released.