The tax savings from the inversion being considered is significant, but there's more to this deal than that.

Forget the tax consequences that may be really driving the deal; the news that Burger King Worldwide ( BKW.DL ) is in talks to buy Canadian donut-and-coffee shop Tim Hortons ( THI.DL ) makes perfect business sense all on its own. The boatload of tax savings it will realize as a result of the so-called inversion the burger joint will effect is merely icing on the cake, or rather an extra order of fries to go with the combo meal.

The Wall Street Journal confirmed the burger joint is looking to create an $18 billion fast food specialist worthy enough to take on both McDonald's ( MCD 1.89% ) and Yum! Brands ( YUM 2.69% ). Although much of the discussion has centered around how Burger King will relocate to Canada to take advantage of the lower corporate tax rates offered by our trading partner to the north, looking at what the deal offers the burger chain operator shows that it's a smart business decision on its merits as well.

1. Growing across the pond
According to a statement issued by both companies following the Journal report, the union of the two quick-serve restaurants would result in a company with $22 billion in annual revenues and over 18,000 restaurants in 100 countries around the globe.

Most of that footprint, however, is derived from Burger King's existing operations, which finds itself with over 13,000 locations serving more than 11 million guests daily in 98 countries. Tim Horton's, on the other hand, is primarily a Canadian business where 80% of its restaurants are located and from where it derives 90% of its sales.

Burger King hopes to change Tim Horton's focus from more than being just about North America -- earlier this year the coffee shop announced it was planning to open 500 more restaurants in Canada and another 300 in the U.S. over the next five years -- saying its experience in building out a large global footprint would translate well in bringing Tim Hortons to international markets. After all Krispy Kreme Doughnuts (NYSE: KKD) has over 850 donut shops in more than 20 countries while Dunkin Brands ( DNKN ) Dunkin Donuts has almost 11,000 restaurants in 33 countries.

2. Morning, noon, and night
From Burger King's perspective though, the merger will create a combined quick-service chain with a menu that's strong across all three dayparts, but particularly breakfast. McDonald's still owns the breakfast niche, with the market researchers at Technomic estimating it has a 31% share of the breakfast meal, which generates 20% of its $28 billion in annual worldwide revenue.

Although Burger King also serves breakfast, it has no menu item uniquely associated with the daypart, unlike its Golden Arch rival whose McMuffin sandwiches are almost synonymous with the meal. Tim Horton's can fill in the gap where Burger King is losing out to McDonald's. .

Last quarter the Canadian breakfast shop saw systemwide sales increase 6.5% including a 2.6% increase in same-store sales in Canada but also a 5.9% jump in the U.S. In contrast, Burger King's comps were up an anemic 0.9% globally and just 0.4% in the U.S. and Canada. It was worse for McDonald's, whose global comps came in flat while U.S. same store sales were down 1.5%, reflecting the negative customer traffic it realized.

3. A hot cuppa joe
And it's in coffee where perhaps the merged company can make its biggest impact. As noted, McDonald's is the clear industry leader and its McCafe line of coffee is arguably the reason many people go to the fast food leader in the first place. It's one of its biggest competitive advantages it has and is undoubtedly behind its decision to follow Starbucks ( SBUX 2.54% ) into the grocery stores to begin selling packaged coffee. 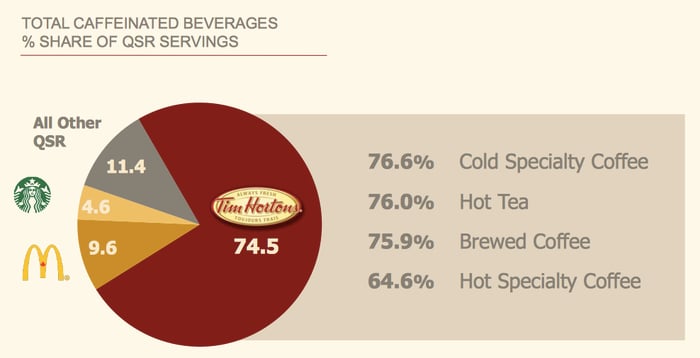 Tim Horton's will provide Burger King a strong lead in the coffee business. It cites a survey by NPD Crest showing that based on transactions, its restaurants represented 76% of the brewed coffee sector in the Canadian quick service market for the 12 months ending last November.

A combo meal worth buying
Yes, the tax implications for Burger King are significant. The corporate tax rate to the north is just 15% compared to 35% here in the U.S., though additional taxes in the provinces, such as the 11.5% corporate tax rate in Ontario where Tim Horton's is headquartered, raises the total, but still not nearly as high as American companies face. According to one analyst, Burger King could save as much as 13% by fleeing north while KPMG says that total tax costs in the U.S. are 46.4% higher than they are in Canada. It ranked Canada as the most business-friendly country when it came to tax structure.

U.S. politicians may be getting hot and bothered by the spate of inversions suddenly occurring, and the Obama administration has vowed to take unilateral action on it, but they'd all do well to look at the inequity of the U.S. tax code as the reason for the sudden interest in the strategy and work to make the system more fair.

Which is why investors would be wise to consider the merits on the transaction exclusive of the tax savings. Executive fiat could always quash that aspect of the deal, and though it might otherwise doom the deal from going through, determining whether the combination makes sense remains a major part of the equation for if it doesn't.

Foolish investment takeaway
On that basis, Burger King buying Tim Horton's seems to offer a lot of advantages. Because the burger joint is already a far-flung global operation, the donut-and-coffee shop provides it with a new international growth vehicle. It gives BK a strong forward operating base into the breakfast daypart that hasn't been its most memorable segment and provides it with a worthy rival for arguably one of the key components of breakfast: coffee.

The 5 Worst Fast Food Menu Items for Your Diet

Burger King vs. McDonald's: Which One Is Better?