Pfizer (NYSE:PFE) may be the largest pharmaceutical company in the world, but size isn't everything when it comes to developing and selling drugs.

Over the past 16 years Pfizer's stock hasn't budged on a nominal basis. That doesn't mean Pfizer's management hasn't been hard at work paying dividends and buying back its own stock to reward long-term shareholders. But the truth of the matter is that Pfizer's been muddling along for quite some time. 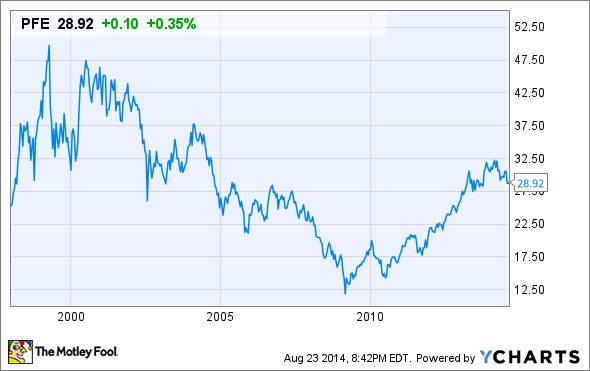 There are quite a few catalysts on the horizon with the potential to push Pfizer's stock considerably higher, including the introduction of key new therapies and the potential for mergers and acquisitions, which could result in sizable cost synergies and possibly tax savings if Pfizer looks for a purchase overseas.

But there's another side to the Pfizer story -- one where it could head markedly lower than where it's trading right now. Of course, you usually won't find these behind the scenes catalysts capable of sending shares of Pfizer lower in its earnings reports. Instead, you need to be able to dig beneath the surface to discover the real reasons Pfizer stock could head lower. Below are outlined three such reasons.

However, it's prudent to mention that just because this piece presents a bearish stance on Pfizer today, there's no guarantee that the stock will go down. The market is made up of the opinions of millions upon millions of investors, who collectively determine where a stock will head next. Just keep that in mind as you read on.

The plus side to Pfizer's size is that its wide variety of drugs and therapeutic focuses helps to offset the loss of exclusivity on patented drugs. Drug patents, as a quick refresher, are issued by the Food and Drug Administration for 20 years, beginning when the FDA gives a company clearance to begin human clinical trials for a drug. Once that therapy reaches the market (assuming it passes all clinical studies and gets the nod of approval from the FDA) it often already has used up quite a few of those 20 years in the development process. However, the remaining exclusivity period is where pharmaceutical companies like Pfizer make the bulk of their profits.

In recent years there's been an acceleration  in the loss of exclusivity on key drugs for a number of large pharmaceutical companies, and Pfizer's drugs have been no different. Pfizer's seen its exclusivity for Lipitor, a drug which brought in more than $130 billion in lifetime sales, whisked away, along with Detrol, Viagra, Effexor, and Spiriva in select countries.

But Pfizer's not done dealing with exclusivity losses. In December of this year, Pfizer is set to lose patent exclusivity on arthritis drug Celebrex, which generates about $3 billion per year for the company and is its fourth-best-selling drug. Pfizer did attempt to extend this patent through litigation, but a U.S. federal court ruled against the company in March.

On top of the impending loss of Celebrex, Lyrica, the company's top-selling nerve and muscle pain drug, which could net $5 billion in sales this year, will lose patent protection by 2018. Pfizer simply can't replace these core drugs, and the expected loss of other less important drugs, quickly enough -- and according to Wall Street, its estimated full-year sales in 2017 of $49.6 billion will still be less than the $52.5 billion the company brought in in 2004!

A lack of catalysts and enthusiasm

There was a time when Pfizer was the drug company to own, as it was a stronghold of innovation. It had a handful of blockbuster drugs, that, when compounded with robust margins, were expected to drive years of impressive cash flow and stock gains.

Looking at the Pfizer of today, I have to scratch my head and wonder where the innovation went. According to the company, as of Aug. 7, 2014, it had 83 different projects in the works, including 34 early stage trials, 23 phase 2 studies, 20 late-stage trials, and six products currently under review by regulators. It also noted that 61 of its 83 studies involve a new molecular entity, 17 are supplemental indications, and five are for biosimilar compounds.

That sounds like a lot of research and development. But where's the payoff? Per a Johnson & Johnson (NYSE:JNJ) second-quarter conference call slide focusing on drugs launched since 2009, Pfizer only ranked sixth among the largest pharmaceutical companies based in the U.S., Europe, and Japan in terms of cumulative sales of new drugs, with $4.8 billion. By comparison, privately held Boehringer-Ingelheim, Bristol-Myers Squibb, Gilead Sciences, and Novartis all surpassed Pfizer, with Johnson & Johnson more than doubling Pfizer's cumulative new drug sales since 2009.

What's more, companies like Gilead Sciences are doing this with a far thinner product pipeline. Per Gilead's development page, which includes new entities as well as new proposed labels, it has around three-dozen compounds currently in development -- but it has still outsold Pfizer's newly approved drugs since 2009.

The emergence of breast cancer drug palbociclib could certainly help Pfizer out, but I fail to see where the catalysts beyond palbociclib are, and what Pfizer is going to do to excite investors about owning its stock again.

Insiders and institutions are selling

Lastly, taking a look at the people behind the curtain at Pfizer can offer clues about where the stock may be headed next.

According to Securities and Exchange Commission filings, over the past six months not a single director or officer has purchased Pfizer stock on the open market, though 13 different sales have occurred. In all fairness, selling for tax purposes isn't all too uncommon, so that could certainly represent the reasoning behind some of these dispositions. However, I had to go back more than a year to find the last time any insider purchased shares of Pfizer stock.

Why is this important? Because insiders have a better understanding of the company than investors or Wall Street will ever know. We can use their stock purchases and sales as clues that might help guide us toward the direction Pfizer will head next. What this lack of interest to buy implies is that company directors have very little faith in Pfizer's pipeline being able to lead its share price higher. If insiders aren't purchasing their company's own stock, why should investors?

But it isn't just insiders -- Wall Street has been bailing on Pfizer as well. Comparing the movement of shares from the previous quarter to the recently reported quarter, based on data from Thomson Financial, institutional investors sold more than 161 million shares of Pfizer stock. In the grand scheme of things, it was only a 3.6% reduction in institutional holdings, but it very well could signal a change in perception inside the company with the patent loss of Celebrex right around the corner.

Pfizer is, without question, nearing an inflection point for investors. On one hand, the company has a possible blockbuster cancer drug being readied for approval, and it could be just days, weeks, or months out from making a major merger or acquisition announcement. Then again, ongoing patent woes, an inability to translate R&D into sizable product revenue, and no visible signs of confidence from management or Wall Street cast a definite cloud over Pfizer's stock. Investors would be wise to consider both sides of the coin before placing a bet on Pfizer.