Ford's all-new 2015 F-150 pickup should keep the Blue Oval on top in one of the industry's most profitable segments. Source: Ford Motor Company.

It depends how you look at it. If you look strictly at traditional valuation metrics, like price-to-earnings ratio, Ford's stock doesn't look cheap right now.

But if you look at what Ford is doing to increase its bottom-line results over the next few years, it starts to look more promising.

Based on earnings, Ford is priced in line with the competition

If you're used to looking at high-flying tech stocks, that may seem cheap. But traditionally, auto stocks have traded right around 10 times earnings when things were going well, so it's not out of line.

And Ford's current valuation is right in line with that of most of its key competitors, as you can see: 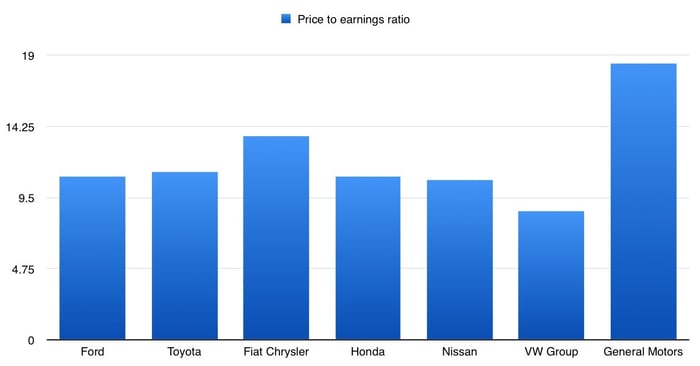 Ford's valuation is right in line with the multiples the market is giving to Toyota, Honda, and Nissan, all solidly profitable companies. That suggests that Ford's stock is fully priced at the moment.

Contrast that with Fiat Chrysler, which is a little more expensive, reflecting optimism around its still-in-progress merger, while Volkswagen Group is a little cheap, because of concerns around its earnings growth and declining U.S. sales.

General Motors looks like an expensive outlier. But here, there's a big asterisk: The costs of GM's recall scandals have clobbered its net earnings over the past two quarters. Factor those out, and GM's valuation would be pretty close to Ford's.

So at least by this simple metric, Ford isn't undervalued. But this is where a closer look can lead to rewards: Ford's potential for growth over the next few years might be a little greater than that of its competitors.

Ford is organized into five regional business units. Those five units, plus in-house financing arm Ford Motor Credit, are the sources of nearly all of its income.

As you can see, one of those business units stands out. 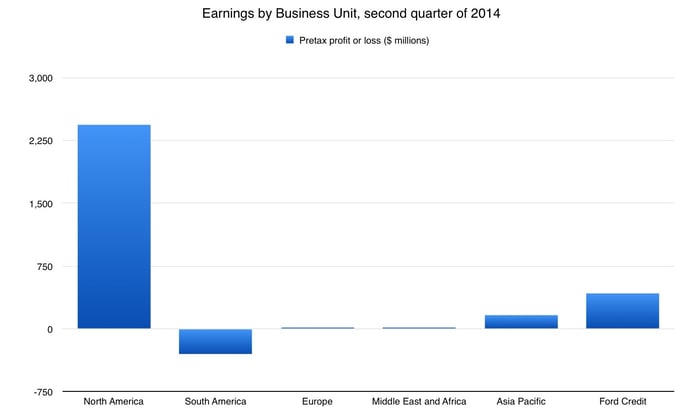 The chart shows pretax earnings for each of Ford's principal business units last quarter. The numbers change from quarter to quarter, but the basic story has been the same for a few years now: Ford's earnings in North America, and specifically the United States, have been carrying the company.

The bad news is that this has left Ford heavily exposed to the ups and downs of a single market. But there's good news, too. First, the U.S. market has been recovering nicely from the recession. That has helped push Ford's earnings and stock price up.

Second, this picture is expected to change over the next couple of years.

Ford's earnings in North America aren't likely to fall significantly, at least not until the next big U.S. recession. But what is expected to change is the company's situation overseas, specifically in Europe and Asia.

Ford has lost a lot of money in Europe over the last couple of years: $1.75 billion in 2012, $1.6 billion in 2013. And the company has warned that it will post another loss in 2014, despite the fact that it earned a tiny profit last quarter.

Ford's recovery plan for Europe includes a slew of new products -- including, for the first time, the Mustang. Ford is currently putting the finishing touches on a right-hand-drive version of its famous pony car. Source: Ford Motor Company.

But that's set to change soon. Ford expects to post a profit in Europe in 2015, as its elaborate restructuring plan bears fruit. Even if it just breaks even, that's a $1.6 billion improvement over last year's pretax earnings -- almost 19%.

Meanwhile, in Asia, Ford's sales are booming -- especially in China, the world's largest auto market, where Ford's sales grew 35% in the first half of 2014. But profits have been modest, because Ford is reinvesting a lot of its earnings in its most ambitious expansion effort since the 1950s.

The Ford Kuga is the Chinese-market version of the Escape SUV. It's one of several models that have helped drive big sales growth for Ford in the world's largest auto market. Source: Ford Motor Company.

Ford currently has five factories under construction in Asia -- four in China, one in India. As those factories are completed and start operating over the next year and a half or so, Ford's sales, revenues, and profits in its Asia Pacific region should all increase dramatically.

Here's the growth story in a nutshell: Ford's efforts in Europe and Asia, which are well under way and solidly on track, could increase its pretax earnings by quite a bit -- possibly 40% or more -- over the next couple of years. Its stock price should follow.

So is it time to buy Ford stock?

The answer to that question is "yes" -- but it's a qualified yes.

On the one hand, Ford is -- right now -- very dependent on the U.S. new-vehicle market, and there are signs that the U.S. market's growth may be slowing. And the rock-star CEO who lead Ford through its spectacular turnaround, Alan Mulally, retired from Ford at the end of June.

On the other hand, as we've seen, Ford is making changes that should lead to big profit gains in both Europe and Asia. It's a good bet that Ford's profits will grow substantially over the next few years, and its stock price should rise as they do.

And while Mulally has retired, we can still say that Ford has very strong management. Mullaly's successor as CEO is Mark Fields, a well-regarded executive who was the principal architect of the company's turnaround. As chief operating officer, Fields essentially ran Ford for over a year with Mulally's guidance -- the best possible training for the top job.

Behind Fields, the top-notch management team assembled by Mulally is all still in place. Also still in place is Executive Chairman Bill Ford, who isn't involved in Ford's day-to-day management but is committed to making sure the company stays on the course set under Mulally.

Ford's products remain strong and competitive, and sales continue to grow. And Ford even pays a dividend, with a yield close to 3% at current prices.

Long story short: An investment in Ford isn't going to give you high-flying growth. But assuming the U.S. economy stays reasonably healthy -- that's the qualification to my "yes" above -- it seems a very good bet to give you solid, low-risk growth over the next few years. You'll collect a dividend along the way, too.