The introduction of wide-body planes in the 1960s ushered in a new era of air travel for aircraft makers, airlines, and the masses. These mean machines are still the blue-eyed boys of Boeing (NYSE:BA) and Airbus (OTC:EADSY), since they offer high margins. The battle for grabbing a bigger slice of the wide-body market is always red-hot, and both jet makers are forever engrossed in this fierce tussle. Airbus has been a leader in the narrow-body segment and has been fighting tooth and nail to match Boeing's dominance in wide-body. Let's find out each one's score in this tug of war by peering through the duo's top-selling wide-body aircraft in the past decade.

Since the time the 777 entered service in 1995, the aircraft has flown more than 18 million hours. Boeing also takes pride in the fact that the 777 has a dispatch reliability rate of 99.3%. Dispatch reliabitily refers to an aircraft's performance on job, as in whether it flew according to schedule, or if maintenance issues held it back. A rate above 99% is ideal.

In addition to being Boeing's top-selling wide-body plane, the 777 is the company's second best-selling model since 2002. In the past decade, the company has delivered 692 777s, and 2013 was a record year, with 89 deliveries. Boeing boosted the production rate in the latter half of 2012 from 7 to 8.3 a month. 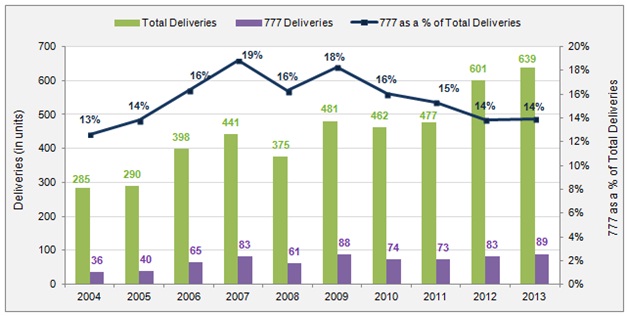 Boeing may have pioneered wide-body aircraft with the introduction of the 747 jumbo jet, but Airbus is no less ambitious. For the Toulouse-based manufacturer, the A330 has been the most successful long-haul plane in the past 10 years in terms of its own delivery count. The A330 entered service in 1994. Serving more than 100 airlines across the globe and offering one of the lowest operating costs in this range, Airbus claims of one of the best dispatch reliability rates of 99.4%.

The company has delivered 764 A330s in the past decade. Every year, it managed to deliver more than the previous period, barring 2011, when delivery matched its previous-year level at 87. In 2013, deliveries peaked at 108. The A330 currently has a production rate of 10 a month. 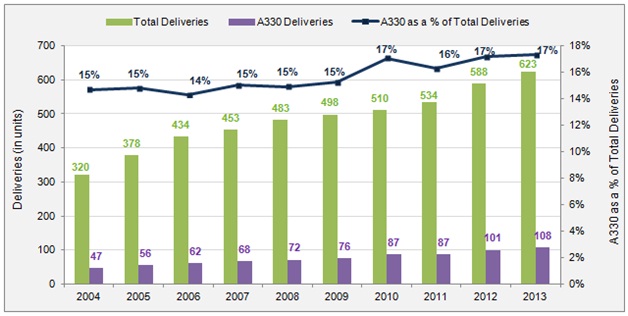 New kids on the block
Both planes have evolved beautifully over the years, and now the duo are busy recreating the 777 and A330 with newer engines to serve airlines that demand more fuel-efficient planes.

Boeing launched the 777 successor, dubbed the 777X, at the Dubai Airshow last year, where it was showered with a record-breaking 259 orders and commitments. The plane will enter service in 2020. Airbus unveiled the next generation of A330, the A330neo, at the Farnborough Airshow in July this year. The European aero major was in two minds, but after "solid trade studies," it warmed up to the idea of reengineering the A330. The jet is expected to enter service in 2017. At the event, Airbus racked up 121 orders and commitment for A330neo, and it thinks the aircraft has a potential market for 1,000 units or more.

A bright future
In spite of analysts' view that the broadening wide-body portfolio could lead to oversupply, Airbus and Boeing feel the segment has big prospects. Boeing estimates that there's a market for 8,600 wide-body planes between 2014 and 2033 as airlines add more international destinations and enter new markets. Around 62% of the deliveries would cater to fresh demand, while the balance of 38% would be for replacements. The jet maker expects the small and medium wide-body aircraft to account for 7,980 deliveries. Both the 777 and A330 fall in this category, and in this battle of innovation, there could be plenty of opportunities for both the aircraft families.

Airbus' head of marketing, Chris Emerson, says that air traffic is going to grow twice as much in the next 15 years, pushing demand for bigger planes, most of which is expected to come from Asia-Pacific airlines. Boeing shares a similar view and sees Asia-Pacific and the Middle East ordering 60% of the new planes.

Final word
The A330 and 777 are the torch bearers of Airbus' and Boeing's wide-body journey, lighting their way to reach newer heights. Boeing and Airbus have high hopes tied to these programs. With rich aviation history, groundbreaking technology in the reengineered versions, and solid future prospects, the A330 and the 777 still have a long runway ahead.

Can You Guess the 2 Best-Selling Wide-Body Planes of the Last Decade? @themotleyfool #stocks $BA $EADSY Next Article
Current