If you are looking at investing in Royal Dutch Shell (NYSE:RDS.A) (NYSE:RDS.B), then you have probably looked at all of the other integrated oil and gas companies as well. After all, the logic for buying Shell is very similar to the rest of the bunch. So, what is it that sets Royal Dutch Shell apart from the rest, and why should Shell be your choice? To help you make a decision on whether to buy Shell's stock, let's take a look at how it stands in comparison to its peers, as well as how the company's shares are valued in relation to both the market as well at Shell's historical valuation.

Shell's case that it's the best of the bunch
Shell hasn't exactly been the best-performing company in terms of earnings or returns recently, and management isn't trying to hide it, either. In its most recent analyst presentation, Shell shows that it has been the worst performer on both earnings per share as well as return on average capital employed over the past four years. The only thing that has likely kept it from being one of the worst-performing Big Oil players over that time period was the Macondo well blowout, which decimated BP's (NYSE:BP) share price. The one thing Shell does appear to have going for it, though, is cash flow generation. Not only has the company been able to remain the second best company in terms of cash flow growth over the past few years, but its recent moves to clear cash-consuming aspects of the business have improved its free cash flow significantly. In 2014, Shell generated more than $25 billion in free cash flow, the most it has done in more than  cash as it did in all of 2012, which was the best year for free cash flow since before the financial crisis. This big uptick in cash flow is a promising sign, especially since Shell and some of its peers have been struggling to convert operations into free cash in the past couple of years. 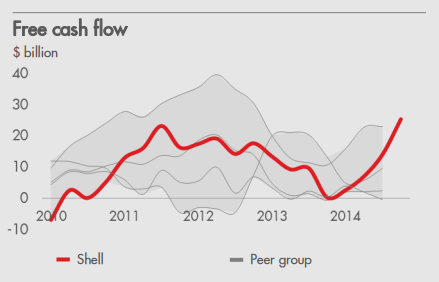 If Shell can maintain this pace and see robust free cash flow, it would give Shell's management a lot more flexibility in what it would like to do in the future -- with either the ability to throw off some extra cash to shareholders through buybacks, or even look to make a few well-placed acquisitions. This could go a long way toward improving Shell's stock performance.

Scouring through the numbers
One thing you need to keep in mind when looking at Shell and the other members of Big Oil is that it is a cyclical business heavily reliant on the price of oil to drive earnings. In fact, this cyclical nature is why the entire energy sector trades at a Robert Schiller adjusted price to earnings ratio of 16, while the Schiller adjusted P/E ratio of the S&P 500 is at 26.3. So, just because the valuation for these companies is considerably lower than the S&P doesn't mean they are cheap. That being said, let's take a look at the numbers for Shell and its peers.

Even though Shell is trading slightly below the broader sector average on Enterprise value to EBITDA and sales ratios, it is trading at a bit of a premium to the the big guns Exxonmobil and Chevron when it comes to price to earnings--also note that both BP and Total did massive asset impairments and writedowns within the past 12 months that are drastically impacting their earnings. The reason Shell is below average on EBITDA and revenue metrics but not on earnings has a lot to do with the fact that its margins are on the weak side compared to Exxonmobil and Chevron.

What really brings Shell's numbers into perspective is comparing them to historical averages. Compared to its historical valuation over the past 10 years, Shell looks pretty overvalued based on its current price to earnings ratio and its enterprise value to EBITDA ratio.

One thing to note, though, is that Shell's shares trade at a slight discount as far as price to tangible book and price to total revenue. This could indicate two things: 1) That there are some large items on Shell's books that aren't generating income -- cough, Kashagan, cough -- and once they do, it will increase earnings and in turn lower the earnings ratios; or 2) There are a high amount of overvalued assets on the books that generate lots of sales, but little profitability. Considering the company is in the middle of a major asset sale to increase cash flows, I would lean toward the latter.

What a Fool believes
Shell may be generating some pretty large sums of free cash today, but there aren't many other things that really wow investors with this company. It trades at a premium to its peers while generating lower returns on capital and pretty weak margins overall. There is a possibility investors are betting Shell will emerge as a more profitable company after its major asset sales and divestment program, but that is a little more speculative, because we don't exactly know what the company would look like afterwards.

If forced to make a decision on whether to buy now or not. I personally would decline and look at one of its peers, like ExxonMobil or Chevron, because their outlooks for future cash flow and earnings are clearer, and their capital spending programs aren't being cut as much. Also, these companies both trade at a slight discount to Shell and are closer to their historical average valuations today.