Shares of Monster Beverage (MNST 0.53%) shot up more than 30% on Aug. 15 following an announcement that the company agreed to a long-term strategic partnership with Coca-Cola (KO 0.82%). Coca-Cola is acquiring a 16.7% equity stake in Monster for $2.15 billion, and the companies are planning several major strategic initiatives.

Details of the agreement
There is much more to this deal than Coca-Cola simply acquiring a portion of Monster for a hefty chunk of change. Both companies are exchanging portions of their brand portfolios with each other, setting the stage for a long-term global strategic relationship. As part of the agreement, Coca-Cola is transferring its 12 energy drink brands to Monster, while Monster is transferring its non-energy drink segment (such as Hansen's, Blue Sky, and Peace Tea) to Coca-Cola. 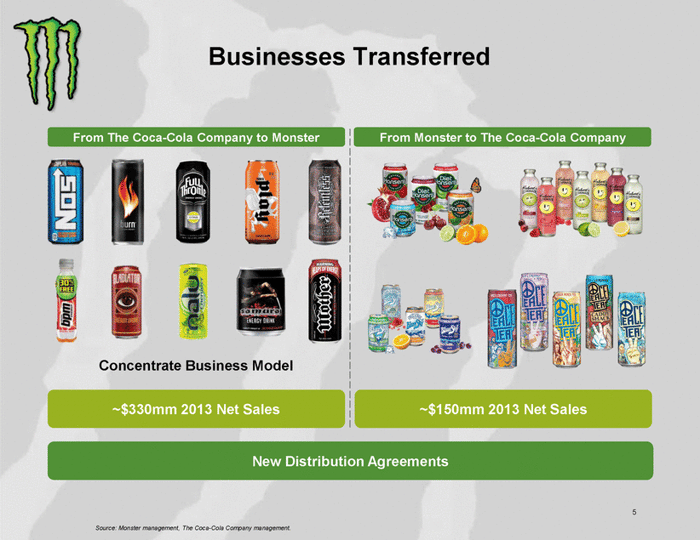 Notably, Monster is gaining energy drink brands NOS and Full Throttle, along with 10 other international brands available in nearly 30 countries. Coca-Cola's energy drink segment brought in about $330 million in total sales in 2013; Monster's non-energy drink segment did $150 million in sales in 2013 (less than 7% of overall sales). Monster, in other words, will see an immediate sales boost and expanded international presence as a result of this brands transfer. See how this transfer will affect Monster: 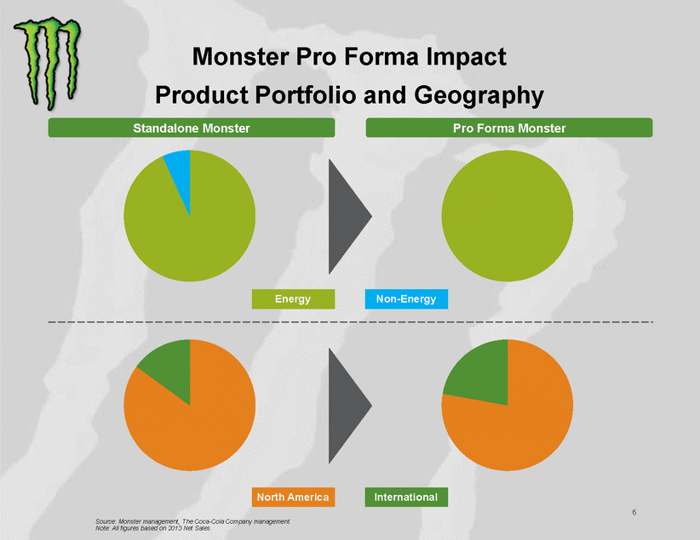 This brand transfer makes a lot of sense for Monster. The company's non-energy drink segment was becoming an increasingly minuscule portion of its overall business (despite my fondness for Blue Sky sodas growing up). It has been clear for quite some time that the Monster brand -- and energy drinks -- are the lifeblood of the company. The company wouldn't have switched its name from Hansen Natural to Monster Beverage in 2012 had this not been the case. 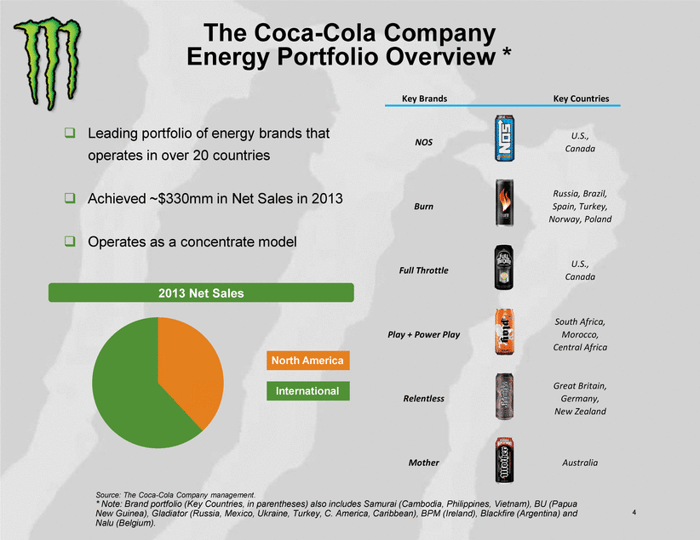 In sum, Monster is diversifying its base of brands while expanding its global reach in the energy drink market. These are exactly the trends we want to see as patient investors.

It gets better
Beyond the equity investment and business transfers, additional pieces of this agreement sweeten the deal:

Looking forward
Assuming the agreement goes through (it is expected to close by the end of 2014 or early 2015), in the short term, Monster will focus on integrating the Coke brands into its business and do a country-by-country evaluation to determine where to prioritize expansion efforts. Monster's balance sheet -- which was already stellar before this agreement with $827 million in cash and no debt -- will have well more than $2 billion in cash once the deal is closed. This should be more than enough capital for Monster to integrate the new brands, continue investing in product development, and further expand around the world.

Looking long term, there are still massive markets that Monster has yet to tackle, namely China. Monster CEO Rodney Sacks said he wants to enter the Chinese market in the next five to 10 years.

Foolish final thoughts
Sacks and Schlosberg have both been with Monster since 1990 and have done a marvelous job growing then-Hansen from a small beverage player into a global juggernaut with the Monster brand. With these two still chugging away and as passionate as ever -- now backed by the resources and global distribution channels of Coca-Cola -- this agreement with Coca-Cola symbolizes the beginning of Monster's global growth story.