America's energy future is offshore -- but it's got nothing to do with oil. New technological developments, as well as a bigger than ever helping hand from Uncle Sam, have tipped the scales for offshore wind. With mind-blowing potential for this infant industry, let's see where the future lies.

Wind 101
Onshore wind energy has taken off in recent years. From 2009 to 2013, wind energy accounted for nearly one-third of all new generating capacity installed. Today, the equivalent of 15.5 million American homes are powered by wind.

But onshore wind capacity pales in comparison to its offshore counterpart. In total, there are 4,150,000 megawatts of wind whipping around America's coasts. To put that in perspective, the entire electricity capacity of the United States clocked in just over 1,000,000 MW in 2011 (the most recent available data) -- roughly 25% of offshore wind's potential. 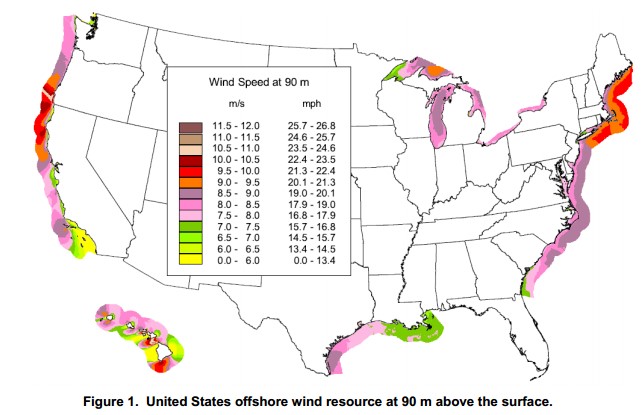 While offshore poses technical and logistical hurdles, location is actually a positive for this power source. Fifty-three percent of all Americans live along the coastline, where "energy costs and demands are high and land-based renewable energy resources are often limited," according to the federal Bureau of Ocean Energy Management.

Making offshore wind work
Electricity generation is capital-intensive and highly competitive. To help offshore wind find its sea legs, the Department of Energy has doled out more than $300 million in awards for 72 different projects. While most of this research will remain onshore and in laboratory settings, the DOE has awarded over $50 million for Dominion Energy's (NYSE:D) initiatives to build two six-megawatt wind turbines around 30 miles off Virginia's coast.

While other projects might be further along their timelines, Dominion's investment may be the first opportunity for U.S. offshore wind to go big. With $50 billion in assets and $13 billion is sales for fiscal 2013, utilities are still the driving force behind U.S. electricity generation, despite inroads from renewable energy companies.

Internationally, the U.S. is relatively late to the offshore game. Denmark made the first foray in 1991, and another nine countries are working together to create an entire offshore electricity grid in the North Sea.

It's getting windy
The time is ripe for America to add its name to the offshore wind list. The International Energy Agency expects offshore wind costs to drop 45% by 2050, while land-based wind expenses will decline by a relatively smaller 25%. The Department of Energy predicts a 40% price cut by 2030, while the U.K. expects turbine prices to drop overall expenses a sizable 17% by 2020. With corporations such as General Electric (NYSE:GE) behind the push for bigger, stronger, and more efficient turbines like the 4.1 MW turbine showcased in the video below, it's no surprise that costs are dropping as fast as opportunities are expanding.

America may have been built on oil and gas, but today we can stand tall on wind energy. The U.S. government and forward-thinking energy companies are diving in to wind energy opportunities. Wise investors should follow suit.