Finding big bank stocks with dividends over 3% is easier said than done. But there are three worth considering, and it turns out they don't just deliver strong dividends, but strong diversity as well, because none of them actually call America home.

1. HSBC Holdings (NYSE:HSBC)
First on this list is London- headquartered HSBC, which can certainly be described as a big bank. At last count, SNL Financial said HSBC was the second-largest bank in the world, behind only Beijing-based Industrial & Commercial Bank of China.

HSBC carries solid operating metrics with an efficiency ratio (which essentially measures the cost of each dollar of revenue) of 58.6%, along with a return on equity of 10.7%. And it's growing even more massive, with loans up 6%, or $55 billion, through the first six months of 2014.

There is some bit of concern on HSBC, as The Guardian newspaper recently noted that one of the "best-known investors" in the U.K., Neil Woodford, sold his stake in the bank "because he was concerned about the increasing size of fines for past misconduct." The report added:

His decision is a blow to HSBC -- the UK's largest bank -- which faces a string of multimillion-pound fines from ongoing investigations in at least a dozen jurisdictions, spanning the rigging of benchmark interest rates to the manipulation of gold and silver prices.

But its also important to note the bank is currently trading at a low 1.3 price-to-tangible book value multiple, or P/TBV -- which essentially measures the difference between what the market says a company is worth versus what it would actually be worth if it were liquidated entirely and only the accumulated equity on the balance sheet remained -- which is well below the industry average of 1.8, according to S&P Capital IQ.

So, even with the litigation concerns, HSBC's very reasonable valuation, strong performance, and hefty dividend might make this a bank worth considering.

2. Toronto-Dominion Bank (NYSE:TD)
Next there is Canadian-based Toronto-Dominion Bank with its 3.3% dividend. And while its dividend yield is smaller than HSBC's, how the market values the bank is certainly greater, as it currently trades at a remarkably high 3.2 P/TBV. This is also well ahead of some U.S. banks that are perceived to be among the safest.

TD Bank is one of the top performers in the banking industry, and through the first nine months of its 2014 fiscal year it saw net income jump by nearly 18% year over year. Its adjusted return on equity stands at 16.6%.

And as the company revealed earlier this year, its strong performance (adjusted earnings per share have grown by 9% each year since 2009) has definitively outpaced its peers in the market:

TD Bank is expensive, which gives some modicum of hesitation, but its impressive history and top-tier industry results make it a worthwhile consideration.

3. Bank of Montreal (NYSE:BMO)
Last, but not least, comes another Canadian bank, Bank of Montreal, which lands almost exactly in the middle of its two peers with a dividend yield of 3.8% and a P/TBV of 2.1. 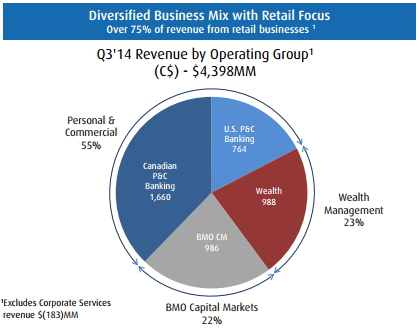 In addition, as the company noted in the chart to the right, it offers admirable diversity in its business mix. Bank of Montreal has a balanced amount of top-line revenue coming from both Canada and the United States from its personal and commercial banking units. It also has solid performance from its capital markets and wealth management teams.

However, it must be noted for both TD Bank and Bank of Montreal, Canadian Finance Minister Joe Oliver announced at the beginning of August that while "Canada's banking system has been recognized for six consecutive years as the world's strongest by the World Economic Forum," they would begin exploring ways to protect taxpayers from "having to bail out a systemically important bank in the highly unlikely event of such an institution running into difficulty."

Few details were given, but The Canadian Press reported that "ratings agency S&P has downgraded Canada's biggest banks to 'negative' over concerns about the federal government's stance on possible bailouts in the future."

Watching these developments will be critical to better understand what the future of banking in Canada may involve.

The Foolish takeaway
As a result of the financial crisis and the strict controls enacted by government regulators, many U.S. banks still pay dividends at rates well below their pre-financial crisis levels. But some banks across the globe still deliver impressive dividends to their investors. These three are certainly on that list, and are worthy of your consideration.