Watch where you walk when eating a candy bar. Image: Hershey.

As corporate rebrandings go, you can say Hershey (NYSE:HSY) has stepped in it.

The confectionery company best known for its eponymous chocolate bar is updating its corporate logo in a bid to ensure customers know that what they're buying is from Hershey. As if the immediately recognizable block lettering of the word "Hershey" wasn't enough, they're going to provide a visual cue now as well, a graphic image of an unwrapped Kiss chocolate candy that will be stuck at the end.

Oh, sure, that will make all the difference in the world.

Unfortunately for the chocolate maker though, its reimagined Kiss happens to look just a bit too similar to a certain online "emoji," or emoticon, often used on social media to depict feces. Its unveiling has brought a new level of derision the candy company probably never expected. Having your chocolates associated with a pile of poo isn't typically seen as a key to successful brand marketing.

Hershey, of course, isn't the only company that's ever failed spectacularly at rebranding its image.

A few years back PepsiCo (NASDAQ:PEP) reportedly spent upwards of $10 million to change its familiar red and blue globe logo with the addition of a white "smile." Maybe it was a smirk, but it was largely seen as a colossal waste of money.

So, too, with Pepsi's decision to reinvent its recognizable (and well-liked) Tropicana orange juice logo, the one where an orange has a straw sticking out of it. That was a bit of genius branding conveying that Tropicana was just like drinking juice straight out of an orange. 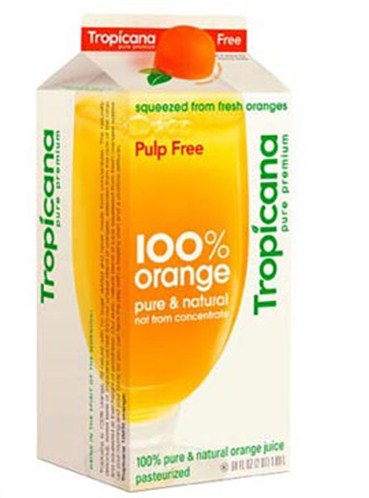 I'll just have a glass of what's-its-name orange juice, thanks. Photo: PepsiCo.

Instead, the folks at Pepsi supposedly spent $35 million to make the packaging look just like a generic store brand. Needless to say, it was long before the beverage maker reverted back to the original.

And like Hershey, Gap (NYSE:GPS) couldn't leave well enough alone, trading in its white lettering on blue background logo for "fresh" black lettering with an offset blue square. That change lasted all of about five minutes after customers harangued the company for messing with something that was simple and effective.

Other epic fails include Radio Shack's attempt at being hip by calling itself "The Shack," and hiring Shaquille "The Shack" O'Neill to be its spokesman, while TV's SciFi Channel incomprehensibly changed its name to SyFy. J.C. Penney also went through a series of logo changes before scrapping them all and returning to its classic one. AOL still isn't relevant despite stamping a lowercase Aol. (yes, you need the period) over a goldfish and other images.

Hershey will get beyond the mockery, but it has to wonder whether it was really money well spent.

Taking visual cues from its candy with the identity system. Image: Hershey.

The rebranding also comes with something called a so-called "visual identity system" that's supposed to support its vision for the future, whatever that means. Drawn from the colors associated with its various products, including Reese's Pieces, Twizzlers, and Ice Breakers, Hershey says it is "an expression of our progression to a modern, innovative company that positively impacts our local communities as we continue to grow globally." Yeah, that too.

Companies can say whatever gobbledygook they want about what a logo is supposed to do, but in the end it should convey something about the company itself and reimagining one, when done right, can breathe new life into a stagnant brand.

When the rebranding goes awry, however, it can cost a company far more than whatever it paid the ad agency to concoct the miscue. It's still early yet to tell whether Hershey's new logo is a kiss of death for the candy maker, but so far the consensus seems to be it stinks.