Few areas of the world are more suited for renewable energy than Hawaii. The sun shines regularly year round, and electricity rates are very high for consumers, the two components that make solar energy competitive with the grid.

Hawaii's high energy prices come from the fact that most of the country's electricity is generated in oil-burning power plants, and the state has to import that oil. The average consumer pays $0.39 per kW-hr for electricity, compared to $0.13 per kW-hr in the rest of the country. But that could drive major innovation in electricity generation, and drive Hawaii away from traditional generation.

Utilities' futile fight against renewable energy
The biggest dynamic that could bring great innovation to the renewable industry is Hawaiian Electric Industries' (NYSE:HE) continued efforts to limit renewable energy -- particularly rooftop solar. It has been dragging its feet on connecting solar homes to the grid, and even proposed a ban on new solar projects in the past. Recently, regulators rejected the utility's rooftop solar integration plans and said it should rethink its entire business model.

While the utility figures out how it will appease regulators' desire to incorporate more renewable energy into the grid, entrepreneurs are contemplating how to make it feasible to leave the grid entirely. During a recent podcast called The Energy Gang, SunEdison (OTC:SUNE.Q) founder Jigar Shah argued that it's already feasible at Hawaii's electricity prices to offer enough solar and energy storage for consumers to cut the cord to the grid. Cutting the cord may not happen en masse overnight, but just the fact that it's within the realm of possibility is a revolutionary shift in energy.

Net metered solar energy is easily economical for installers to build today, but with net metering under attack, it could be energy storage that breaks the utility in Hawaii. If consumers begin defecting from the grid, it may not be long before the entire state could be 100% renewable.

When can Hawaii be fossil fuel free?
The big question now is how long it might be before Hawaii is relying on renewables for all of its electricity. There are a lot of dynamics that go into the answer, but I've laid out the thought experiment below to put some numbers to the debate.

Last year, Hawaii consumed 9.81 million MW-hrs of electricity. If we assume renewable energy sources like solar can operate at an average capacity factor (the amount of power they produce compared to nameplate capacity) of 20%, the state will have to install 5,602 MW of capacity to be 100% renewable. 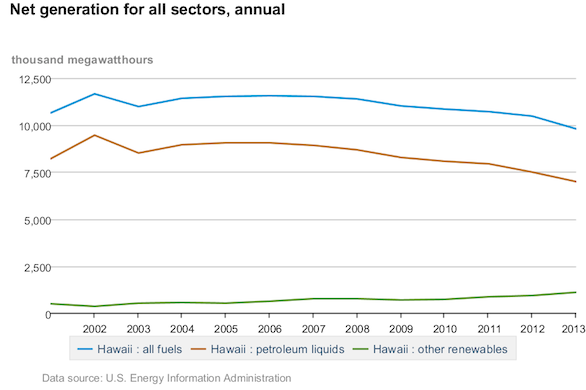 That's not out of the realm of possibility considering that it installed 146 MW of solar last year alone. If annual installations triple, it would only take only 13 years to be fully renewable. If energy storage costs fall rapidly, it's possible it could happen even sooner.

At the end of the day, the key is that renewable energy -- particularly solar energy -- is so cost effective in Hawaii that it's driving a rapid change in the state's thoughts on energy. Today, it's even possible that installing rooftop solar and energy storage would make cutting ties to the grid economical. That's a paradigm shift in energy, and it will make Hawaii a place to watch for energy companies and investors alike.

Hawaii Could Be 100% Renewable Before You Know It @themotleyfool #stocks $TSLA $SPWR $SCTY $SUNE.Q $HE Next Article
Current