Wells Fargo (NYSE:WFC) is by and large considered the very best of the major U.S. megabanks, and in my opinion, the bank deserves that designation. The market recognizes Wells as the better bank as well, and we can see that in the company's market cap relative to its size.

By assets, Wells is the nation's fourth largest bank, trailing fellow megabanks JPMorgan Chase (NYSE:JPM), Bank of America (NYSE:BAC), and Citigroup (NYSE:C). However, in terms of market cap, Wells blows away the competition. 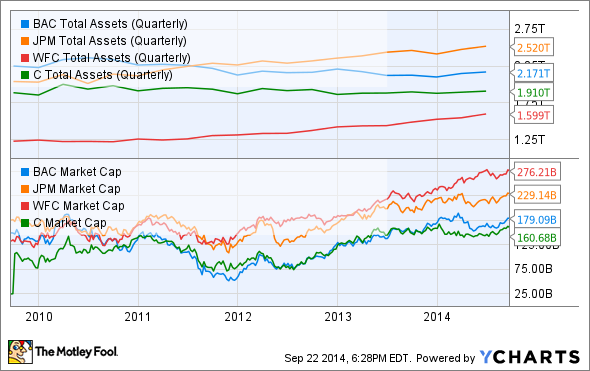 Put into context, Wells is 74% the size of Bank of America in terms of total assets, but it sports 154% of B of A's market cap. The reason extends beyond the financial results. Those results are a symptom of something far more important.

It's more than capital, efficiency ratios, or legal problems. It's about culture. It's about leadership and philosophy and discipline.

The reason Wells Fargo will always beat Bank of America over the long term is that Wells Fargo has a better culture built into it's DNA. To demonstrate this critical and intangible quality, let's flash back to another financial crisis 25 years ago. History, it seems, really does repeat itself.

Flash back to 1992
In my opinion, this story was best told in value investor Joel Greenblatt's book You Can Be a Stock Market Genius, though Bruce Berkowitz made the original investment thesis in the Nov. 25, 1992, edition of Outstanding Investor Digest.

At the time, California was in the midst of a significant real estate crisis. Banks with exposure to the real estate market were being hammered in the markets, notably Wells Fargo and BankAmerica (a predecessor to today's Bank of America). Because Wells had by far the largest concentration of real estate loans in California, many investors considered BankAmerica a safer investment. But those investors were missing some key details.

Greenblatt explains that Wells was being quite cautious in its classification of these problem loans, more so than BankAmerica and much more so than investors at the time realized:

It turns out that Wells was actually being so conservative that about 50% of those loans were actually current on all their required principal and interest payments.

Short-term success versus long-term dominance
Instead of focusing on maximizing every last penny of earnings in the short term, Wells made the decision to throttle earnings temporarily to build up its reserves. For a few quarters its earnings appeared to be weak, but in reality the bank was setting itself up for massive long-term success.

When the real estate crisis abated in California, Wells was able reclassify the majority of these loans, release all those built-up reserves, and unleash the company's full earnings power. The key was the leadership, philosophy, and discipline in managing the loan portfolio during the downturn. The results? By September 1994, Wells Fargo's stock had more than doubled.

BankAmerica took a different approach. The bank had a substantially lower exposure to the California real estate market than Wells did, but it failed to reserve sufficiently for the problems in its loan portfolio. While Wells' stock was doubling, BankAmerica was left in the dust, struggling to deal with unexpectedly high problem loans from a recently acquired bank.

Sound familiar? It should.
It's almost shocking how similar this story is to the narrative since the financial crisis. Wells Fargo is still the same conservative, prudent bank. When the economy fell apart in 2008 and 2009, Wells had stronger capital levels and better reserves, and it was able to quickly overcome the problems it did have.

Today, thanks to that culture of discipline, credit quality, and conservative management, Wells Fargo is the most valuable bank in the United States.

Bank of America, on the other hand, was growing rapidly via large acquisitions. Six years later, the bank is still struggling to recover from the mistakes it made years ago. 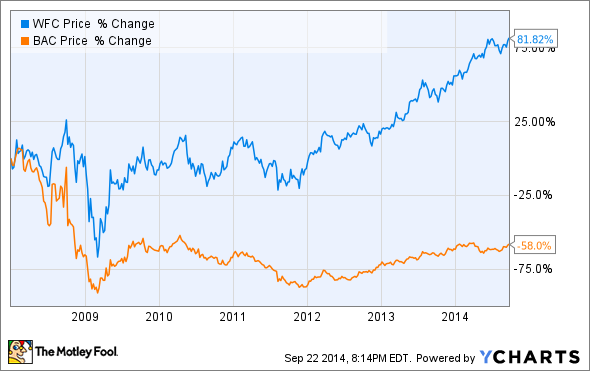 So why will Wells Fargo always be a better bank thank B of A? As simple as it sounds, the answer is culture.

Ask yourself, knowing what you now know about these two banks and their respective cultures: As a long-term investor, which bank do you trust to survive and then thrive the next time the economy dips into a recession?