Pet parents still love their pet babies, so why is PetSmart under attack?

The American Pet Products Association expects all spending on pets in the U.S. will increase 5% in 2014, hitting more than $58 billion as owners continue "humanizing" their pets. That includes a projected $22.62 billion in spending on food and $15.25 on veterinary care.

With a 72% increase in such spending over the past decade, PetSmart's stock rose from under $20 a share in 2003 to over $70 a share at the end of last year. But this year the pet supplies leader stumbled, and its stock lost nearly 20% of its value. 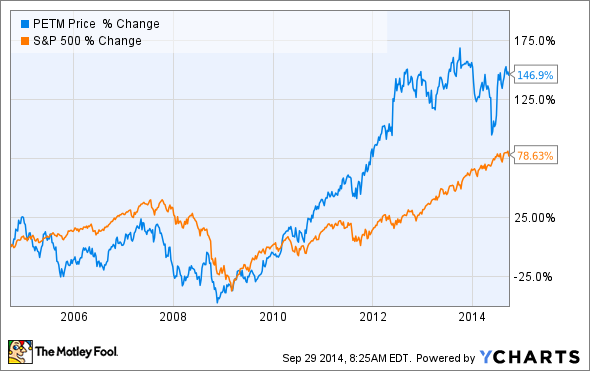 That was until Jana Partners stepped in with an activist stake at midyear and demanded PetSmart consider putting itself up for sale, leading to its biggest one-day stock gain in over two years.

The pick of the litter
Not every company grows in a straight, smooth line. They suffer delays and setbacks that can cause growth to be deferred. So what about PetSmart's position led the private equity firm to shake things up?

PetSmart operates more than 1,340 stores, employs 53,000 workers, and runs some 200 in-store dog and cat boarding facilities, all of which combine to generate almost $7 billion in revenue annually.

While it has outperformed the S&P 500 and the index's specialty retail store group as a whole in terms of total return for the past five years, Bloomberg data shows that in comparison to other retailers with market valuations north of $1 billion, PetSmart actually lags well behind on a variety of criteria, including operating margin and its price-to-free cash flow.

Jana itself has said PetSmart's operating performance and capital structure needs improvement, but also that it must improve its disclosure to shareholders and its management and board needs an overhaul.

Being called to heel
In particular, the activist investor pointed to five key areas where the pet supplies company has faltered:

While Amazon.com (NASDAQ:AMZN) made a big splash with its acquisition of Quidsi that allowed it to enter a broad spectrum of retail outlets, including pet supplier wag.com, PetSmart didn't think it important enough to consider basing executive compensation on e-commerce growth until 2012 and didn't hire a dedicated executive to manage its digital platform until this year. Jana said that myopia has put it far behind the competition, and that catching up will not be easy -- if it's even possible.

Activist investors are looking to defang management and the board.

Getting pricing right is essential now that Wal-Mart (NYSE:WMT) and Target (NYSE:TGT) are also making sustained efforts to make pet supplies a key reason to shop at their stores. Jana said PetSmart's prices can run 15% to 35% more than the competition in certain markets.

Off the leash
Other analysts find PetSmart is also losing market share to competitors such as Petco and Tractor Supply (NASDAQ:TSCO), with the former especially using innovative, smaller-store formats to grab customers. Jana said PetSmart has lagged Petco in store traffic by 16% since 2011.

While the opportunity is large, and PetSmart still has a leading position in the industry, it's only going to get harder as market growth tightens.

Although the APPA expects 5% growth in total pet spending this year, the trend has otherwise declined. Last year, growth came in at 4.4% over 2012, which was down from 4.7% growth in 2012 over 2011. There have been a few recent years in which growth has jumped, and 2014 could be another one of them, but the trend over the past decade has been significantly slowing growth.

Slower growth, more competition, and a lack of strategic thinking on the part of management has activist investors looking for change at PetSmart.

Choking on a fur ball
Unfortunately, management and Jana Partners don't exactly see eye-to-eye, and the investment manager publictly stated that it was "stunned" by the board's decision to pursue share buybacks as the primary means of creating value for shareholders.

Even if PetSmart was seen as capable of enhancing value for investors, it has a sorry record when it comes to generating value through share repurchases in recent years. The retailer produced negative return on buybacks over the last one-, two-, and three-year periods and ranks 16th out of 17 peers in returns over the past year.

Such conditions make a company ripe for intervention by activist investors, so it shouldn't be much of a surprise that they're the tail wagging PetSmart's dog these days.