Whole Foods stock has crashed in 2014. Is competition from Kroger and Wal-Mart to blame?

Whole Foods Market (WFM) investors are having a tough year. After a solid 2013, the natural  food retailer's stock has crashed 34% so far in 2014.  While Whole Foods faces serious challenges, fear over the falling stock price have taken the focus away from what is really happening with the business. Let's take a look at both the hype and reality behind Whole Foods' stock decline in 2014, and look at the challenges that await investors on the road ahead. 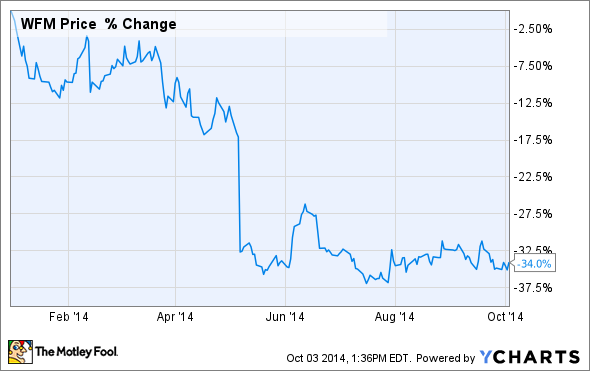 Competition concerns miss the mark
Many pundits feel the entry of lower priced retailers, such as Kroger (KR -1.74%) and Wal-Mart, into the organic food business is hurting Whole Foods on prices. There are two reasons to believe that this argument is overstated.

1. Low-priced competition is not new
A Kiplinger article by Anne Kates Smith outlined the competitive threats facing Whole Foods. The author pointed to slowing same-store sales, and wondered if Whole Foods was ceding growth to small upstarts and low-priced retailing giants. She explained that Whole Foods may lose customers to Wal-Mart, which was quickly moving into the hot organic food industry, at a lower price point. These sound like familiar arguments, right? It may surprise you, but the article I'm referencing was written in 2006.

Since that time, low-priced markets like Wal-Mart and Kroger have certainly targeted the organic market more aggressively, but I feel Whole Foods has advantages over both.

While new natural "upstart" competitors are also present, they were in 2006 as well. Trader Joe's, which the author mentioned in 2006, has enjoyed rapid growth alongside Whole Foods.

Organic food sales grew an estimated 11.5% last year, to $35.1 billion, and that growth rate is projected to grow faster over the next five years. While that means increased competition, it also means that the industry can support more than one winner. Yet, Whole Foods, which was recently ranked as the 23rd most valuable brand by Interbrand, should remain at the forefront of customers' minds, and shopping lists.The Whole Foods mix of pricing, store experience, and social consciousness should allow it to enjoy as much of the projected industry growth as anyone.

2. Whole Foods margins have withstood "365" pricing admirably
The grocery business has notoriously tight margins. Yet, while Whole Foods' operating margins have dipped slightly this year, they are still near all-time highs, and far ahead of traditional grocers, like Kroger. 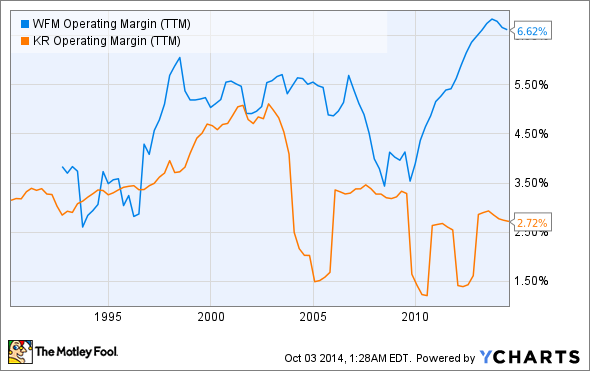 Whole Foods' operating margin is the percentage of profit it takes from sales, after expenses. This wide lead would suggest Whole Foods still does a pretty good job of marking up its products and charging a premium above its costs, despite its lower-priced competitors. In doing so, Whole Foods' business benefits by having higher returns on invested capital (below). 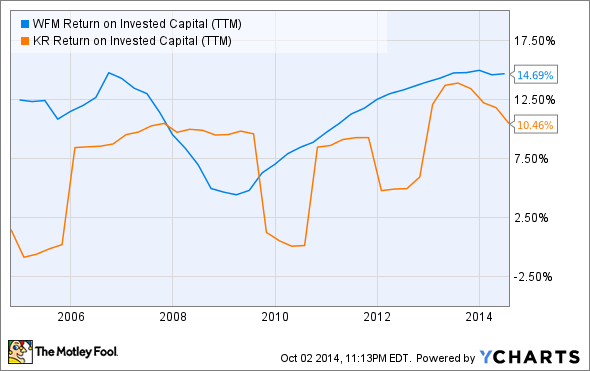 Return on capital is a great tool for evaluating the profitability of a business. It tells us how much money a business makes, versus the costs of starting and running the business. As illustrated in the chart above, Whole Foods earns 14.69% to Kroger's 10.46%. So, for every dollar investors give Whole Foods to open new stores, hire employees, and run its business, they return about $0.14. That extra "four cents," Whole Foods returns (per dollar invested) over Kroger is reinvested in its business, which is a competitive advantage.

The real reason for  Whole Foods' stock decline
Whole Foods has also lowered its outlook for 2014 four times this year. Most recently, the outlook for total sales growth was set at a range of 9.6%-9.9%, and same-store sales at 4.1% to 4.4%. By contrast, it came into the year expecting total sales growth of 11%-13%, and same-store sales growth of 5.5%-7% for 2014. This uncertainty has rattled many skittish investors, and it's affected the stock significantly.

Focus on what matters
Whole Foods is not losing customers to low-priced retailers. I believe that if the company simply decided to keep operating its existing stores, in its current markets, it would deliver excellent returns for years because its customers are fiercely loyal. The problem is that Whole Foods wants to be a hyper growth company.

Whole Foods currently has 388 stores, it wants to be over 500 by 2017, and 1,200 total eventually. Most Whole Foods stores today are located in areas where residents have very high disposable income. To get to 1,200 stores that will need to change. Whole Foods is already opening stores in some lower income neighborhoods, and attempting to bring its experience to more people, which is unchartered territory.

Most of Whole Foods' woes this year come back to one thing, it isn't growing as fast as expected. It remains to be seen if it can support growth to 1,200 stores, as it runs out of affluent new areas for growth. That said, the stock is not really priced for huge growth today.

Whole Foods stock has performed much worse than its underlying business has in 2014; it's worth a look.