Facebook's recent announcement about a new way to share ads on the Internet could be the beginning of a large, new stream of revenue.

With a $200 billion market capitalization and a wildly optimistic price-to-earnings ratio of 84, Facebook (META 2.99%) will need to tap into some key growth opportunities in order to live up to investor expectations. The company's Audience Network, a feature that was rolled out to all Facebook marketers this week for the first time, could be one of the new, key growth opportunities shareholders have been hoping for. 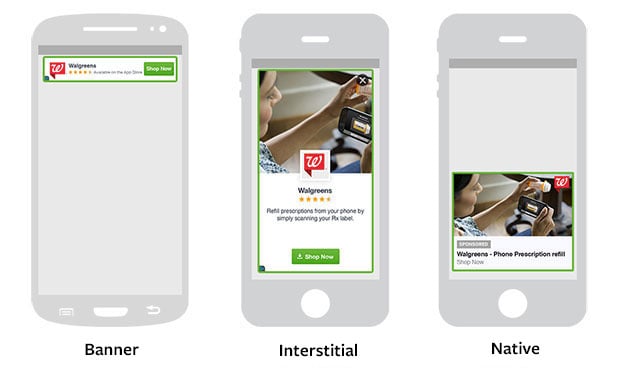 Three types of ads delivered by Facebook's Audience Network that you may see in third-party apps. Image source: Facebook.

The opportunity
The Audience Network opens up a huge addressable market to Facebook that it is only just beginning to tap into on mass scale. And the company brings with it a unique approach that could prove to help the company effectively generate advertiser interest.

Facebook hopes that its unique targeting abilities that focus on users' profiles as they browse the Internet will entice advertisers to use Facebook advertising beyond the walls of Facebook. The social network argues that this user approach to targeting is superior to an approach based on cookies, since in a multi-screen environment users are often switching from desktop to smartphone to tablet, etc.

Facebook outlined what it feels is its advantage over traditional digital display ad marketing across the web in its blog post on the relaunch of Atlas (a similar effort by Facebook to expand its ad revenue beyond the confines of Facebook) last month.

People spend more time on more devices than ever before. This shift in consumer behavior has had a profound impact on a consumer's path to purchase, both online and in stores. And today's technology for ad serving and measurement – cookies – are flawed when used alone. Cookies don't work on mobile, are becoming less accurate in demographic targeting, and can't easily or accurately measure the customer purchase funnel across browsers and devices or into the offline world.

Generally, Facebook says that businesses using the Audience Network are "already seeing strong results." In more specific examples, Walgreens, an early tester of Audience Network, says it boosted its reach by 5% and that its click-through rate on ads increased by four to five times during tests with the Audience Network. Game developer Machine Zone was able to acquire new, highly engaged players while decreasing costs per install. Publishing company HarperCollins saw impressions jump 16%.

Facebook stock is in a unique position, with execution and growth opportunities working for it, and a rosy valuation making upside more difficult. To really understand the key storylines impacting the social network, check out this overview here on Facebook stock.