Please ensure Javascript is enabled for purposes of website accessibility
Log In Help Join The Motley Fool
Free Article Join Over 1 Million Premium Members And Get More In-Depth Stock Guidance and Research
By Sean Williams – Oct 13, 2014 at 10:00AM

Online job site 51job may be cheap, but that doesn't mean Wall Street wants anything to do with it. Find out why Wall Street is so pessimistic on 51job and whether or not this stock has any shot of heading higher.

The last few days haven't been a lot of fun if you're a stock market optimist, but if you take the big picture view the S&P 500 has tripled since hitting lows in March 2009. Even following the S&P 500's big declines over the past week it's still up more than 4% this year.

That's a lot better than China-based online jobs website and outsourcing company 51job (JOBS) has done. Since the year began, 51job shares have ceded nearly one-quarter of their value, despite a growth rate that would make some investors drool. 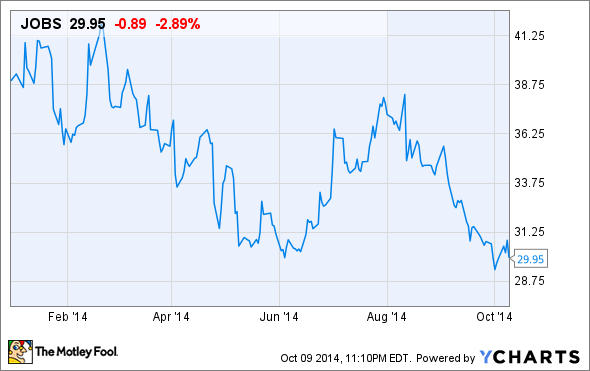 In spite of 51job's relative "cheapness", it's a company that Wall Street and its analysts would rather have nothing to do with. With that in mind I suggest we take a look at what exactly qualifies 51job as a cheap stock, why Wall Street loathes this China-based jobs company, and ultimately whether or not there's upside potential to its current value.

How exactly is 51job cheap?
There are, admittedly, a few ways to determine whether a stock is cheap or not. Wall Street, though, tends to turn to the price/earnings-to-growth, or PEG, ratio, as its truest and most consistent measure of a stock's "cheapness."

A PEG ratio utilizes the price-to-earnings ratio of a company, which measures how profitable a company has been over the previous four quarters, and divides that figure by the company's estimated growth rate over a specified time (most often a five-year period). Instead of focusing solely on a company's growth in the rearview mirror, which is what the P/E ratio does, Wall Street and investors can use the PEG ratio to get an idea of how expensive or cheap a company is based on its future growth projections. In general, any PEG ratio of around one or below one is considered "cheap."

Just to give you an example, imagine a company you own had a P/E ratio of 15 and a five-year projected growth rate of 10%. In this instance its PEG ratio would be 1.5, or 15 divided by 10. When it comes to 51job, the company's trailing P/E might not immediately have you thinking it's a value stock, but its estimated five-year growth rate of 20% dramatically reduces its PEG ratio to around one, thus classifying it as cheap.

Why Wall Street hates 51job
As I mentioned above, it's not often that a company is considered a cheap stock by Wall Street's standards and is still unloved by analysts; however, 51job fits the bill. At the moment there are five Wall Street firms covering 51job, of which three rate the company the equivalent of a hold, with the other two rating it an underperform.

"Why is Wall Street so down on 51job's future?" you ask? I suspect there are three factors at play here.

First, despite strong growth, there are real concerns that a weakening Chinese economy could result in much slower jobs growth. In the second-quarter 51job was able to deliver 13% sales growth and 21% EPS growth, so it's not as if the company struggled to grow in any meaningful way. However, China's GDP growth of 7.5% in the second-quarter is well below the three decade average of 10%.

Furthermore, as noted by Bloomberg, real-estate investments comprise in the neighborhood of 16% to 20% of China's GDP. Because the health of China's economy is highly connected to the success of its real estate sector, and the investment growth rate in real estate development has fallen for seven straight months, there are concerns that China's near-term growth rate may be in for more downside, which would ultimately be bad for the jobs-focused 51job.

Secondly, job sourcing sites in China aren't static, and competition is brewing for 51job at a breakneck pace. As Bloomberg noted in August, competition is pushing 51job into a number of smaller cities in China where its pricing power isn't nearly as strong. This could be why the company forecast revenue growth in the third quarter of 8% to 12%, below its prior forecast of 9% to 13% growth. The potential for margin deterioration continues to keep Wall Street firmly on the sidelines.

Finally, don't overlook the persistent distrust of China-based companies' balance sheets following more than a dozen book-cooking scandals a few years ago. As a company valued at roughly $1.8 billion, investors would like to believe that the numbers they're looking at are trustworthy. But investors also have to keep in mind that China's financial oversight is considerably different than that of the U.S., which tends to keep Wall Street gun-shy about placing any premium on Chinese stocks.

Where might 51job head next?
Regardless of whether Wall Street is enamored with 51job or not, what investors and current shareholders really want to know is where this stock is headed next.

My personal opinion is that 51job is indeed headed for some challenging times, though I don't believe it has anything to do with the growing level of competition. In fact, I believe 51job's ability to expand into smaller cities, even if that entails a small margin hit, is a good strategic move over the long run.

Instead, I see a sizable threat to China's GDP growth rate deteriorating even further. For example, China's manufacturing PMI has vacillated between 50.2 and 51.7 for the trailing year. Anything above 50 signals expansion, but in this case it would signify a very slow rate of expansion, which isn't very impressive considering the 7.5% GDP growth rate in Q2.

Additionally, housing is a huge concern, if I didn't make that readily apparent in my point above. What's equally scary about housing investments slowing down is what some project developers are doing in order to move properties in Guangzhou and Shenzhen. In order to cool housing prices and speculative investing, the Chinese government implemented regulations requiring a buyer put 30% down. Per a Bloomberg report in June, some builders are circumventing this regulation and allowing Chinese citizens to buy property with no money down. This is exactly how the housing crisis began in the U.S., and it could be a precursor for something similar in China.

Combined, these factors lead me to believe that businesses in China won't be looking to hire at a quick pace, if at all, until well after manufacturing growth picks up and/or the housing sector finds itself on firmer ground. For investors, I'd say that the smartest move here would be to take a wait-and-see approach from the sidelines.

The Motley Fool recommends 51job. We Fools may not all hold the same opinions, but we all believe that considering a diverse range of insights makes us better investors. The Motley Fool has a disclosure policy.