It's been an absolutely wild ride for Netflix (Nasdaq: NFLX) stock over the past several years.

After selling off amid fears over valuation and growing competition, Netflix stock nosedived from a high of around $300 in July 2011 to under $65 just four months later, a downward move that set the stage for the truly astounding rally that ensued. From late 2011 to the present, Netflix stock has soared nearly 500%, well above the roughly 65% gain of the Nasdaq Composite. It's truly a mind-boggling 5-year chart. 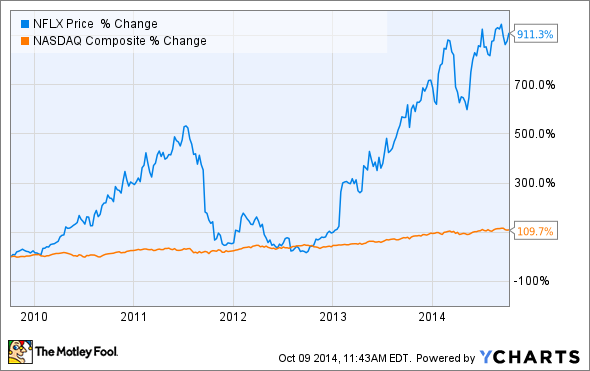 Arguably, the single greatest driver of Netflix's about-face has been its prescient move into original content, a move that's drawn untold users into Netflix's swelling subscriber base and garnered a gaggle of awards for the streaming giant. And in the next progression in its on-going transformation from simple streaming service to full-on original content maven, Netflix recently announced it will move into original movies as well.

Inside Netflix's next chapter
Recently, Netflix announced two different deals in its bid to become a silver screen star in its own right. Both deals partner Netflix with established Hollywood presences that should help it address its long-term strategic road map in different ways.

With its first deal, Netflix will partner with Hollywood heavyweight The Weinstein Company to produce the sequel to the acclaimed martial arts epic Crouching Tiger, Hidden Dragon: The Green Legend. The movie will debut next August 28 in IMAX theaters globally and on Netflix's streaming service, a simultaneous release that's the first of its kind. The Weinstein Company, and its two eponymous brothers, have a long and storied history of betting on less-known projects and turning them into winners. The Weinstein brothers have been behind hits including Pulp Fiction, Shakespeare In Love, and Chicago among many others. And at surface level, their company seems like the kind of gusty, visionary partner Netflix needs in its attempts to break into full-length features.

company recently announced that it will partner with comedian Adam Sandler to star in a total of four new feature films that will debut exclusively through Netflix's streaming service. Sandler's Happy Madison Productions will handle production responsibilities for the four currently unknown movies. The exact timing of these releases is less clear than the Crouching Tiger deal as the four films do not include any current commitments or projects from Sandler.

So, is this a win for Netflix?
Assessing the potential financial impact of these deal remains ambiguous at best since there's little in the way of hard details available and we won't be able to get a sense of overall quality of these offerings until 2015 at the earliest. However, there is a clear strategy at work between these two deals, one that should bode well for Netflix in the years to come.

For starters, Netflix is clearly betting on established brands that play well in the U.S. and abroad. Although released in 2001, the original Crouching Tiger, Hidden Dragon was an absolute sensation any way you slice it. The film won four Oscars including Best Foreign Film and garnered another six nominations including Best Picture. It also turned a paltry production budget of $17 million into global sales of $214 million with strong results in the U.S. and internationally. And even though it's been years since its predecessor, Netflix is clearly hoping to leverage the original's lasting brand cache and a savvy production team to catch lightning in a bottle once again. It's also worth noting that this title could play especially well in East Asian markets, an area that remains largely untapped at present.

Similarly, despite a string of recent duds, Sandler is a brand with real staying power and beloved by fans worldwide. His films have grossed over $3 billion

globally and are coveted among programming executives for their ability to consistently draw audiences without much viewer fatigue. So long as the films prove watchable, not a given accounting for recent history, Sandler's films could provide Netflix with another powerful tool in its on-going international expansion plans.

The sun never sets on the Netflix empire
Ultimately, these deals make plenty of sense for Netflix. In fostering these partnerships, Netflix has aligned itself with a proven production firm, helping to minimize financial risk and increase their chances of producing appealing content.

At the end of the day, the entire feature film storyline, like the original television programming before it, comes back to Netflix's long-term user growth strategy. Netflix learned long ago that the way to truly diversify itself from the other crop of wanna-be streaming competitors was by owning content that people both wanted to see and couldn't get anywhere else. So while we'll have to wait some time to truly be able to assess their ultimate merit, Netflix's move into original feature films certainly seems to fit well within the broader, and thus far successful, context of its overall business strategy, and that's something that Netflix investors should certainly take comfort in.