LinkedIn's advertising business is young and has incredible potential in the years ahead. Just look at what Facebook has done with mobile.

There are numerous reasons why LinkedIn (LNKD.DL) is totally worth its premium valuation. One such reason is that the company's advertising business is still underdeveloped and growing. LinkedIn has long had a marketing solutions segment, but this business has evolved in major ways in the past couple years.

LinkedIn has been steadily shifting focus toward content marketing, and its ad business could soon be a $1 billion business, according to a recent report from Ad Age.

The best of both worlds
As usual, LinkedIn's unique positioning on the professional side of things gives it different types of growth opportunities not afforded to its social networking peers.

When it comes to marketing, we're talking about business-to-business, or B2B, marketing. B2B is fundamentally different than business-to-consumer, or B2C, marketing on a number of levels. B2B marketing fetches higher ad prices, which somewhat offsets lower volumes compared to B2C marketing campaigns.

The best part is that LinkedIn is able to play both sides. It continues to grow its B2B platform, while brands are trying to grow their consumer presence on LinkedIn. At the end of the day, everyone is a consumer (LinkedIn calls its members "prosumers"), but LinkedIn still gets to cater to B2B marketers at the same time.

LinkedIn's monthly active user base is smaller than you think
With the rising importance of content marketing, advertising, and mobile usage, LinkedIn's engagement metrics are also becoming more pertinent to the business. In the second quarter, the company changed its reporting methods around its engagement metrics.

Previously, LinkedIn used third-party data from comScore for both unique visitors as page views. comScore did not differentiate if the user was a member or not, and the figures also did not include mobile activity. LinkedIn is more interested in what its members are up to, and an increasing number of members are accessing the service with mobile devices, so comScore's figures simply wouldn't suffice any longer.

Since this change was so recent, there isn't a long history of data to analyze. Here's what LinkedIn has reported so far.

These member metrics are the equivalent to monthly active users, or MAUs, that other social networks report. LinkedIn defines a visiting member as having accessed the site at least once per month.

There's another aspect to consider. While LinkedIn has long reported data around its registered member base, the recent change in reporting to effectively include MAUs gives a new, more useful perspective.

With "just" 84.2 million MAUs, that represents just 27% of the total 313 million registered members that LinkedIn has all over the world. On a percentage basis, that's actually lower than the 31% of members who were active monthly a year ago, even as the absolute number of MAUs is growing.

As LinkedIn's focus on content will only intensify going forward, boosting its engagement metrics and MAU figures will further reinforce the advertising business.

Foreshadowing from Facebook?
With all of this in mind, investors are better able to compare LinkedIn to its social peers, and the implications are surprising and encouraging. Facebook (META 2.79%) first launched Sponsored Stories in February 2012, effectively marking its foray into mobile. This is how the mobile business has ramped since then. 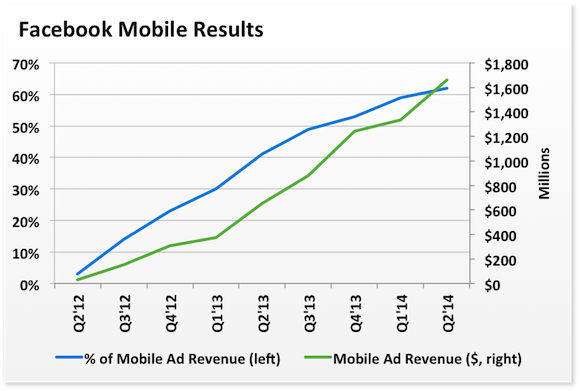 LinkedIn introduced Sponsored Content in July 2013, which now accounts for 28% of ad revenue. In dollar terms, that was $29.8 million in ad sales in the second quarter. Make no mistake, Sponsored Content is where LinkedIn's mobile ad business is heading, and is easily among the company's most important products right now. This is just the beginning. 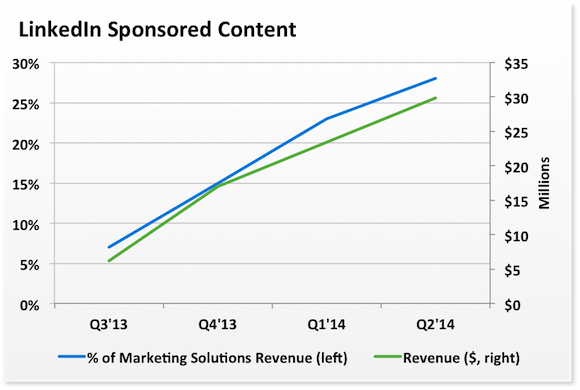 Fastest growing business ever
Users may never spend as much time on LinkedIn as they do on Facebook, but that shouldn't discount the upside in engagement that LinkedIn has ahead of it. The company opened up its professional publishing platform in February beyond its group of selected Influencers, and now has 100 million members creating content, according to Ad Age. Importantly, LinkedIn doesn't pay for this content as it's entirely user-created, but it will help bolster engagement.