Please ensure Javascript is enabled for purposes of website accessibility
Log In Help Join The Motley Fool
Free Article Join Over 1 Million Premium Members And Get More In-Depth Stock Guidance and Research
By Travis Hoium - Oct 18, 2014 at 11:26AM

You can now finance SolarCity's growth with a new offering from this solar leader. But is it a good deal?

For decades solar energy was something for hobbyists or scientists that could somehow justify the expensive energy solar power provided. But in the last decade the cost of solar energy has fallen rapidly and now homeowners and businesses can go solar without putting any money down and still save money on their electric bill.

One company leading the solar charge is SolarCity (SCTY.DL), which has made it a mission to bring not only solar energy but also solar financing to the masses. The latest step in that process was the announcement of a solar bond sold to consumers directly through SolarCity's website. It's novel in the corporate world and if you're interested in solar it may be an investment worth considering.

What SolarCity is offering
SolarCity is offering investors big and small the opportunity to fund their debt in the form of a solar bond, which is a misleading name for reasons I'll cover below. The bonds vary from 1-year to 7-year lengths and come with yields as low as 2% and as high as 4%. The current shelf registration statement says interest payments will be made February 15 and August 15 every year.

To buy the solar bonds investors would go to SolarCity's site solarbonds.solarcity.com where you can see some information on the bonds and a comparison to low yields investors are currently getting in other investment vehicles. Then it's just a matter of signing up and paying SolarCity for the bond you want. 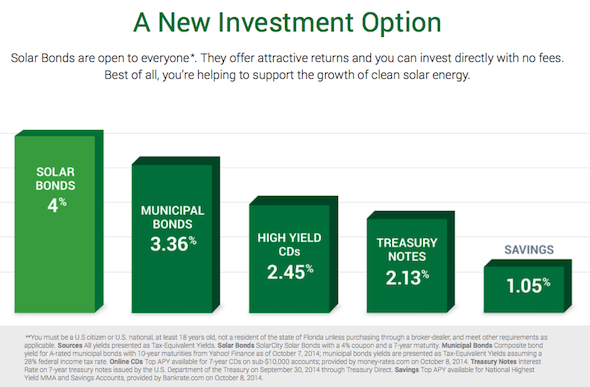 What's novel about this approach is that SolarCity is going direct to the public instead of going through an investment bank that normally distributes debt to investors. They're essentially cutting out the middle man in finding ways to fund their business. But there are also some things about this offer that you need to know.

This is important for investors to know because they're not first in line when it comes to SolarCity's cash flows. Equity investors in solar projects and securitized debt investors would have a first crack at cash flows and assets in the case of a bankruptcy, so that's something investors need to be aware of.

Despite the fact that SolarCity is trying to compare its bond yields to municipal debt and treasury bonds it's a different beast entirely because the risk of default is higher.

It's also not clear how a secondary market will work for SolarCity's solar bonds. Traditional bonds can be traded through a brokerage account in secondary markets but what will happen if you buy a bond directly from SolarCity? That's a question that's yet to be answered by SolarCity.

With solar bonds you'll be funding SolarCity but don't have assets like this solar system backing your cash flows. Image source: SolarCity.

Is this a good deal for investors?
If you're a fan of SolarCity or if you're looking for a little higher yield than a bank account should you buy SolarCity's solar bonds? That depends largely on whether you want to fund SolarCity's growth, but what's clear is that they're not offering a sweet deal for investors.

If we just compare to the bonds SolarCity has sold to institutional investors the yields they're getting are much higher. Solar asset backed notes sold last November came with a 4.8% interest rate, and remember that they'll be senior to the unsecured debt of these solar bonds.

SolarCity's third securitization -- which is backed by solar project cash flows -- had interest rates of 4.03% and 5.45% for two tranches, both higher than these solar bonds.

In May of this year the company entered a term loan that currently pays 3.15% over its two-year duration and is secured by "certain assets and cash flows." These term loans are not only senior to the solar bonds being offered but offer a higher interest rate over a 2-year timeframe.

The comparison to what's available on the market also isn't very favorable for investors. If you're just strictly looking for a yield investment it may be better to buy an ETF like the iShares iBoxx S Investment Grade Corporate Bond ETF. It has a distribution yield of 3.44% and holds bonds in stalwarts like Verizon, Goldman Sachs, and GE. A higher yield can be found in the SPDR Barclays High Yield Bond ETF, which generates a dividend yield of 5.99% and holds bonds from Sprint, Tenent Healthcare, and Chrysler. Both ETFs offer diversification and solid yields if that's the investment you're looking for.

Solar bonds aren't for everyone
Based on the yields for competing bonds and bonds SolarCity has previously offered I don't think solar bonds are the best investment option available given their structure and the risk involved. But if you're looking for a way to invest directly in a solar fixed income investment it may fit the bill.

I've covered why I don't think these bonds are a good deal for investors, but for SolarCity, if this offering is successful it could open up a low cost funding pool to fund future growth.

At the very least, it'll be a new financing option worth watching in the solar industry.