Is SolarCity undervalued or overvalued? That's the question our solar specialist tries to answer.

One of the hardest things to do in the solar industry is value solar stocks. Companies are increasingly moving away from making quarterly income by selling goods outright and shifting towards owning and financing solar projects over years or even decades. Owning projects is something SolarCity (SCTY.DL) has focused on in its short history as a public company.

So what are all of those solar systems worth, and what should you be willing to pay for SolarCity stock? I'll try to answer that below.

How SolarCity wants you to view their business
One of the complexities in valuing a company like SolarCity is that it doesn't have straightforward financial statements. Since it installs most of its solar systems with long-term power purchase agreements or leases, its revenues are spread over 20 years or more, resulting in low revenue and large losses short-term. 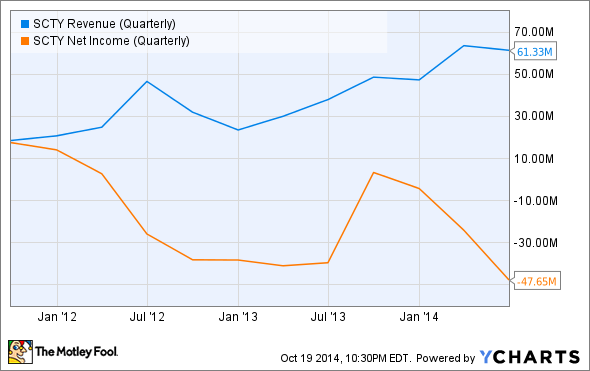 As a result, SolarCity has created concepts like retained value to estimate the present value of the leases it has signed. As of the end of the second quarter SolarCity had $3.3 billion in contracted payments from customers and $1.8 billion in estimated retained value. As this figure goes up, SolarCity is creating more value for shareholders -- and that's what management wants you to keep your eye on.

How investors should view SolarCity's business
The problem with valuing SolarCity based on retained value alone is that it makes assumptions -- like the renewal of a lease in 20 years and very high rates of lease transfer to new homeowners -- that should be taken with a grain of salt. But the bigger challenge is that the lease model is likely peaking in popularity, and even SolarCity is transitioning to selling solar systems with loans. This will fundamentally change where SolarCity's value will come from, and makes valuing SolarCity on retained value over the long term almost a moot point.

To adjust to this, I think the correct way to look at SolarCity's value creation each quarter is to take contracted retained value (this excludes a renewal assumption built into reported retained value) plus gross margin of product sales (think loan sales in the future) minus operating costs. This would be analogous to EBIT -- or earnings before interest and taxes -- in present day dollars.

Over the last year, SolarCity has added $881 million in contracted retained value in 546 MW of booked projects, which is the point when retained value is booked, leading to $1.08 per watt in contracted value per watt booked. Of course, that value doesn't become real value until it's installed, which is the measure I've used below. This table attempts to show the amount of value SolarCity will install in the next three years based on its own projections for deployments and my assumptions for value created.

Source: SolarCity and the author's own calculations.

So, why have I projected that value per watt booked will fall over time? The simple answer is that SolarCity is in a highly competitive market with falling costs. Today, it may be able to generate $1.08 per watt in contracted value, but it's moving into the lower margin loan market and competitive system pricing. If it costs $1.90 per watt to build a system in 2017, as management predicts, a 5 kW system would cost just $9,500 to build. It's unlikely SolarCity would be able to sell that system for nearly $15,000, which would be a more than 36% gross margin. Competitors would flood into the market and offer lower costs.

It's far more likely that margins will fall to 10%-20%, or closer to $0.50 per watt over time. That's why the net value per watt booked falls over time in my analysis above.

So what is SolarCity worth?
Based on the assumptions above, you can see that value added annually grows each year despite the fact that value per watt falls. This is because SolarCity is growing so quickly.

The question now is that multiple to put on these value added figures? Remember that this is an approximation of the present value of EBIT, not net income, so a lower multiple should be used than you might use for a P/E ratio.

Using the 2015 estimate, I think a 6x-8x multiple of value add is appropriate, giving SolarCity a value of $5.4 billion to $7.2 billion. I think this gives investors some upside potential if value added ends up being higher than I predicted, while accounting for the very real possibility that prices and margins will be squeezed long-term.

With all of this said, it's difficult to value a company like SolarCity which is changing rapidly and still reporting massive losses quarter after quarter. But there's definitely value there, and this is one way to put a figure on what investors are getting in SolarCity.