Last week, 3D Systems (NYSE:DDD) announced that it has established a five-year, $150 million unsecured revolving credit facility with a group of banks, led by PNC. According to CEO Avi Reichental, the establishment of the facility will allow 3D Systems "to strategically execute on our focused long-term initiatives for the benefit of all our constituents." At 3D Systems' discretion, the company has the option to increase the facility's credit line by an additional $75 million. With over $570 million in cash and virtually zero debt at the close of the second quarter, why is management willing to take on a form of debt that has requirements tied to its financial performance?

Understanding "bank debt"
Credit facilities are a form of what legendary investor Peter Lynch refers to as "bank debt," which typically has stricter financial terms than funded debt -- when a company issues longer-term bonds and pays them back at maturity. On a high level, bank debt is often due very soon after it's issued and sometimes can be due at the first signs of trouble, which can make it more difficult for companies to maneuver during a challenging period. Bondholders, on the other hand, aren't able to demand their money back if signs of financial trouble surface, as long as the borrower continues to make interest payments. In other words, funded debt could give a company greater flexibility to weather a difficult financial time than bank debt could.

Specifically, if 3D Systems' financial position deteriorated significantly, the banks backing the credit facility could demand their debts be paid back immediately, which would probably compound any financial problems 3D Systems were facing. During its most recent trailing four quarters, 3D Systems generated about $101.9 million in EBITDA -- more than enough to utilize the entire $150 million facility -- putting its total leverage ratio at slightly less than 1.5 to 1. 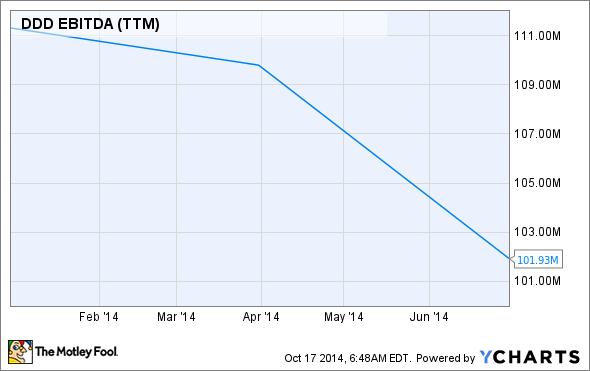 Motivating factors
The biggest difference between using a credit facility and issuing bonds is that credit facilities can be paid back at any time before coming due, giving the borrower greater flexibility over its cash flow needs, whereas issuing a traditional bond would lock a borrower into a defined repayment schedule and create a long-term commitment.

As a result, credit facilities are often used in business for short-term funding needs, and it appears that 3D Systems may make use of this facility to mitigate its rising cash conversion cycle without having to allocate existing cash on hand for shorter-term needs. A company's cash conversion cycle measures the time it takes in days to run cash through the sales process, from sitting in the bank through buying inventory to selling that inventory and receiving cash from the sale. The shorter the cycle, the less time cash is tied up, and the more often it can be reinvested in the business. 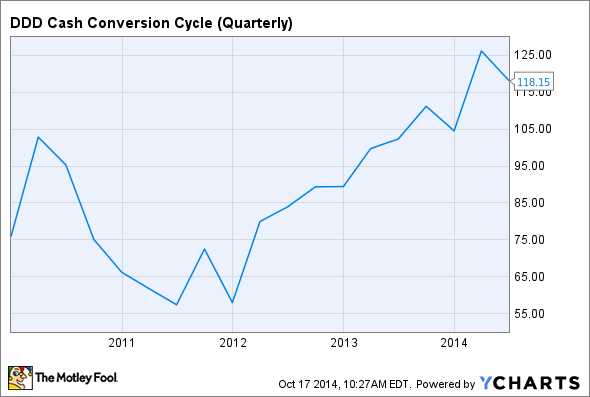 Unfortunately, 3D Systems' cash conversion cycle has been steadily rising in recent years -- a worrying sign that indicates the company isn't efficiently managing its inventory, paying its suppliers, and getting paid by customers. It's likely that 3D Systems' aggressive acquisition strategy has diverted management's attention away from focusing on operational efficiency, which, over the long term, could lead to poor operating performance.

Addressing the issue
While a rising cash conversion cycle is definitely an unwelcome sign for investors, the establishment of this credit facility could indicate that 3D Systems' management is working to address the problem without having to tap into the existing cash on its balance sheet for shorter-term needs. Under this scenario, 3D Systems could theoretically use the $570 million of cash on hand for investing in future growth and use the credit facility for shorter-term funding needs of the business.

Nonetheless, a case could be made that because 3D Systems isn't operating at maximum efficiency, it therefore isn't maximizing value for shareholders, despite its efforts to aggressively pursue its market opportunity and grow its market share. Going forward, 3D Systems investors should consider monitoring the company's cash conversion cycle to determine whether management is regaining its focus on efficiency, which, over the long run, could prove be quite meaningful for shareholders.