Understanding the factors that could send shares higher over the long term.

With shares of 3D Systems (DDD 1.09%) off more than 50% year to date, it may present a buying opportunity for long-term investors. Before jumping in, though, it's important to consider some of the major factors that could improve 3D Systems' long-term business prospects -- and help drive its stock price higher.

Having made roughly 50 acquisitions in the last three years, 3D Systems is on a quest to define itself as The Everything 3D Printing Store, offering a diverse range of 3D printing products and services to personal, professional, and industrial customers. While becoming a jack-of-all-trades may sound like a risky strategy, it has allowed 3D Systems to grow its revenue at breakneck speeds. In 2013, 3D Systems grew its revenues by 45% year over year, or 10.1 percentage points greater than the 3D printing industry at large, which suggests that 3D Systems' strategy is helping it grow its share of the industry's total revenue.

What's more, 3D Systems has been investing heavily in research and development and strategic partnerships. On the R&D front, 3D Systems has more than doubled its R&D expenditures from years past, and management has highlighted that investing in R&D will remain a cornerstone of its strategy going forward. Of 3D Systems' many strategic partnerships, its one with Google may lead to the creation of a game-changing 3D printing manufacturing platform, which could have the potential to make 3D printing a more viable option for larger-scale manufacturing runs.

With acquisitions, R&D, and strategic partnerships, 3D Systems is arguably leaving no stone unturned in hopes of growing its market share and becoming a leading 3D printing company for decades to come. 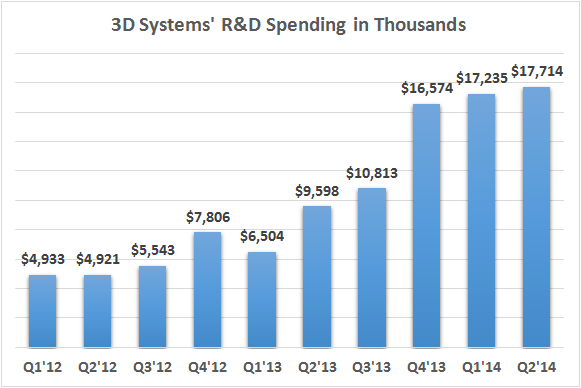 2. 3D Systems has the biggest market opportunity of any 3D printing company around

3D Systems' printing portfolio is based on seven different technologies, which is the most of any 3D printing company. This gives it the ability to cater to more 3D printing applications than its competitors, because different technologies are often best suited for specific applications. For instance, the 3D printing technology to produce a personalized titanium hip replacement is substantially different from the technology best suited for creating late-stage multimaterial prototypes for product designers. Use the table below to get an overview and to learn more about 3D Systems' technologies:

Ultimately, the more applications a 3D printing company can cater to, the more opportunities it has to generate revenue. Because 3D Systems' diverse technology portfolio allows it to cater to the most applications of its peers, it therefore has the biggest market opportunity in the business. 3D Systems CEO Avi Reichental has even gone on record saying that the company is sitting at the center of a $35 billion "design-to-manufacturing value chain." Also, have a look at 3D Systems' case studies to see the range of applications 3D Systems' technologies can serve.

3. 3D Systems would rather invest in the long-term success of its business than deliver stronger short-term earnings results

In the last year, it's come to light that 3D Systems' management would rather invest in the long-term best interest of its underlying business, even if it comes at the expense of short-term operating results. Although this long-term focus has caused 3D Systems to miss analyst expectations for the last two quarters, and is arguably inflating its trailing P/E ratio, management believes it should help deliver better business outcomes in the years ahead.

Next year, 3D Systems' management is aiming to reach the milestone of $1 billion in annual sales -- nearly double its 2013 full-year sales results. Management expects that come 2016, the company's operating leverage will be "fully restored," meaning investors are likely to get a better sense of the company's earnings potential in the not-too-distant future.

3D Systems is a long-term-focused company that isn't concerned with short-term earnings. While this approach may not jive with shortsighted investors playing alongside the quarterly Wall Street expectations game, it aligns nicely with the interests of long-term investors who are willing to endure the inevitable ups and downs.

In the context of its 50% year-to-date sell-off, which may have been driven by short-term factors, it could prove to be a great buying opportunity for long-term 3D Systems investors. As a current 3D Systems shareholder, I won't be adding to my position today, but I'll continue holding on to my shares for as long as the underlying business and its future earnings potential remain on track.