No matter how you slice it, this pizzeria comes out on top

There's seemingly no end to the combinations possible with a pizza pie, including where you eat it, whether it's at your corner pizzeria, in a casual dining restaurant like Pizza Hut, or having it delivered to your house from Domino's Pizza (DPZ -1.69%).

Yet despite not being exactly the same in terms of style, ambience, or even pizza offerings, the size of one chain's global footprint means they dwarf the competition.

Slicing up the market
According to QSR Magazine, Yum! Brands (YUM 0.53%) Pizza Hut chain is far and away the industry leader in terms of revenues, number of restaurants, and revenue per restaurant, followed in order by Domino's, Little Caesar's, Papa John's Pizza (PZZA -1.30%), and the recently IPO'd Papa Murphy's (FRSH).

*Some data based on Technomic estimates. All data is 2013 from QSR Magazine .

Still, although they're the industry heavyweights, they're not necessarily across-the-board leaders operationally. For example, Little Caesar's is expanding its footprint at a rate more than five times faster than Pizza Hut (albeit starting from a smaller base) while Papa John's generates more sales from each restaurant than does Domino's even though it's about 25% smaller in size (on a global basis, Domino's is two-and-a-half times larger).

But numbers don't tell the whole picture when we're talking about food; it's really how the pizza tastes and the quality of the experience the customer has.

Mama mia! That's a good pizza!
Maybe it's the satisfaction derived from sinking your teeth into a fresh-out-of-the-oven slice, but pizzerias outrank every other limited-service restaurant on an annual survey conducted by The American Customer Satisfaction Index, which is based on data from interviews with roughly 70,000 customers.

Of the top 12 restaurants reviewed, pizza shops filled out the top four slots, ahead of other well-established chains like Wendy's, Subway, and even Starbucks. 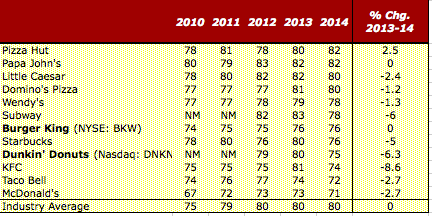 Due to the many headline news problems surrounding Pizza Hut's parent, you might be surprised to see it moving to the top of the customer satisfaction list this year. In fact, it was the only restaurant -- pizza shop or otherwise -- that actually improved its positioning from last year.

And despite many of the improvements Domino's made to its product, it still dropped year over year.

Topping the rest
That seems to be a counterintuitive outcome, because when you compare their same store sales, or the sales generated by restaurants open a year or more -- an important retail metric because it generally measures a company's repeat business rather than that achieved by opening more stores -- Domino's has been hotter than bubbling cheese topping whereas Pizza Hut's been as cold as a day-old slice. 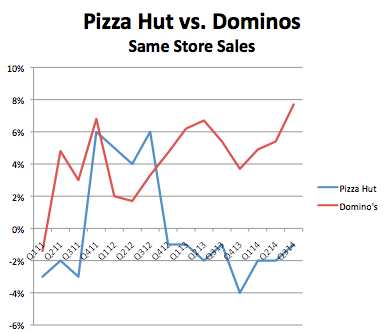 Domino's reported earnings recently, notching another quarter of higher than expected comps that grew 7.7% from last year and was well ahead of the better than-5% growth it achieved in the year ago period.

Both companies, though, view international growth as the future, and despite Yum! Brands vaunted troubles in China, both it and Domino's are casting eyes toward other emerging markets like India as well as across Europe.

In the end, while Pizza Hut comes out on top when it comes to size and squeezing money out of each location, and even though customers say they like their experience there more than elsewhere, it's Domino's that is growing sales and winning in the marketplace, and should be considered the better business.