Google and Microsoft are in a race to straddle both the mobile and desktop markets. Which tech titan will emerge victorious?

This has been a long time coming. Five years ago, Google co-founder Sergey Brin predicted that Android and Chrome OS would likely "converge over time". Android apps have recently appeared on Chromebooks and vice versa, and Google asked Hiroshi Lockheimer, the VP of Android, to also lead the Chrome engineering team. These moves strongly indicate that the convergence of Google's mobile and desktop operating systems could be right around the corner.

Meanwhile, Microsoft has repeatedly emphasized its "One Windows" strategy, which will unite phones, tablets, and PCs under a single operating system. Today, the Windows market is fragmented between Windows Phone, Windows RT, and Windows 8 -- three separate systems which aren't fully compatible with each other. With Windows 10, the number-skipping upgrade which will arrive next year, Microsoft will eliminate those incompatibilities with a single cross-platform OS.

Therefore, the stage has been set for a massive clash between the two tech titans to unite the mobile and desktop markets. Is there room for both companies to thrive, or will one giant eventually crush the other?

How Google plans to expand into PCs
Android is currently installed on 84.7% of the world's smartphones, up from 79.6% a year earlier, according to IDC's second quarter numbers. Microsoft's Windows Phone only controlled 2.5% of the market, down from 3.4% a year ago.

For Google, the main challenge is to grow Android beyond mobile devices. Previous efforts to deploy Android as a full laptop OS have proven awkward and expensive. Hewlett-Packard (HPQ -1.70%) recently launched the Android-powered HP Slatebook 14, but Android apps were poorly optimized for the device, and it launched at $430 -- considerably more than Chromebooks or low-end Windows laptops.

Meanwhile, Chromebooks have gained lots of traction thanks to their sub-$300 price tags and cloud connections to Google's services. Gartner expects sales of Chromebooks -- which are manufactured by Samsung, Acer, and other partners -- to nearly triple from 5.2 million in 2014 to 14.2 million by 2017. While that year-over-year growth is impressive, Chromebooks currently only represent less than 2% of the world's PC market.

To gain ground against Windows PCs, Google recently launched its "Chromebooks for Work" initiative, which adds new pricing plans and features for enterprise use. Google is also encouraging Android users to buy Chromebooks with new Android-exclusive features. "Easy Unlock" will allow Android users to unlock their Chromebook via Bluetooth, Android notifications will show up on Chromebook screens, and more Android apps are expected to arrive on Chrome OS.

How Microsoft plans to expand into mobile
Meanwhile, Microsoft controls over 90% of the world's PC market with Windows.

According to Net Market Share, 12% of PC users are using Windows 8/8.1, 53% are sticking to Windows 7, and 24% are still stubbornly holding on to Windows XP. Microsoft's first move would be to get all of its users on the same page by convincing them to upgrade to Windows 10 (with possibly free or cheap upgrades).

The second step would be to properly integrate Windows 10 phones with PCs. Microsoft has stated that the Windows 10 interface will scale down between the desktop, tablet, and phone versions while running on the same kernel. This means that the desktop version of an app could scale down -- like the desktop/mobile versions of a web page -- depending on the device used. Meanwhile, software and saved data across multiple platforms via the cloud. 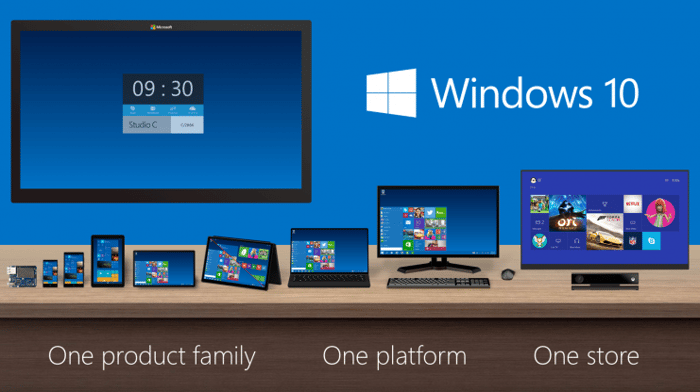 For now, Windows Phone will be a tough platform to turn around as it fumbles around in low-end emerging markets. However, Microsoft recently partnered with Toshiba, Acer, and other companies to launch cheap Windows 8.1 tablets. Toshiba's Encore Mini, for example, only costs $99 -- which could be a tempting choice compared to a low-end Android tablet.

In my opinion, if Microsoft makes progress with these low-end tablets, it's a great setup to enter the phablets (5.3 to 6.9-inch phones) market with Windows 10 devices. If that happens, Microsoft could essentially offer a scaled down Windows desktop experience via a smartphone -- which could appeal to plenty of PC users worldwide.

The Foolish final verdict
In conclusion, tech investors should remember that Google and Microsoft are expanding out of their respective home turfs into enemy territory.

Both companies face steep challenges ahead, but Google's Chromebooks give it an edge over Microsoft. Although Chromebooks only account for a small percentage of the PC market, they are growing quickly in a sluggish market. If Chromebooks gain more market share over the next few years, Microsoft could lose longtime Windows users, which could undermine the appeal of Windows 10 phones.