Is American Tower (NYSE:AMT) a buy today, one week before the cell tower operator reports third-quarter results? Spoiler alert: I opened a real-money position in this stock a month ago, and American Tower has done absolutely nothing to undermine my analysis since then.

In short, there's much to love about this stock and very little to dislike.

What's so special about American Tower?
Despite its flag-waving corporate name, American Tower runs a global business with operations on five continents. In particular, the company is open for business in exciting growth markets including India, South America, and Africa. As the next billion people connect to the Internet and to modern communications networks, American Tower will play a part where the growth opportunities are the richest.

Seventy-five percent of SBA's towers sit on American soil. The domestic part of Crown Castle's operations rises to 96% since less than 2,000 towers come from a recent expansion in Australia. But American Tower owns or leases 40,700 towers in foreign markets, alongside 28,500 U.S. sites. That's 59% international operations and only 41% domestic. And the company is still busy buying out established foreign tower networks, accelerating its international expansion.

This is the key feature that makes American Tower vastly more attractive than its industry peers. You should also know that American Tower sports a 19% net profit margin today, while Crown Castle stops at 4.7% and SBA isn't profitable. So investors get a premium combination of proven moneymaking success and a promising future.

The stock does indeed trade at nosebleed valuations -- but you get what you pay for.

The strong business prospects ahead could motivate American Tower investments for growth investors. Value hunters would be more interested in this chart: 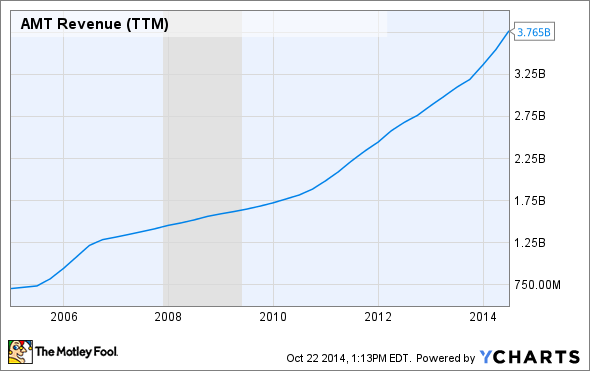 Notice the gray stripe, outlining the global economic crisis of 2008-2009. American Tower's revenue didn't even stutter during this event, but kept rising like clockwork -- and getting ready for acceleration in the post-crisis years.

The long-term nature of American Tower's contracts delivers this ultra-stable revenue curve, immune to nearly any disaster or economic downturn.

It's a rare double-punch combination that made me add American Tower to my own portfolio in September. Nothing has changed since then, and shares are trading within 2% of my entry price. I'd be just as comfortable buying this stock at current prices, with the next quarterly report on the near horizon.