Gaming stocks have had a rough go of it in 2014, and sometimes it seems there's no end in sight to the drop in share price for Las Vegas Sands (NYSE:LVS) and its competitors Wynn Resorts (NASDAQ:WYNN) and Melco Crown Entertainment (NASDAQ:MLCO). 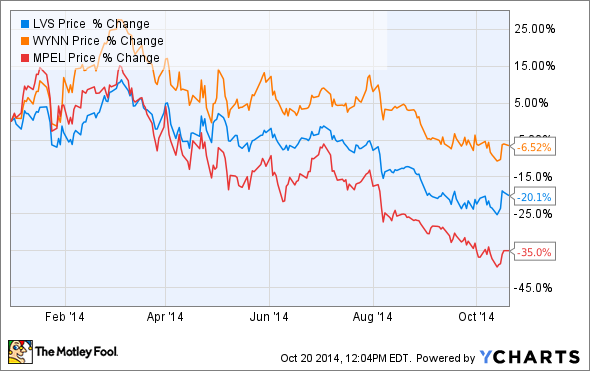 It's impossible to tell if gaming stocks will rise or fall in the short term, and the lower stock prices could be a buying opportunity if a recent decline in Macau's gaming revenue turns around. But these stocks could fall further, and investors should keep an eye on three major risks.

More downside in China
The catalyst for the recent slide in Macau gaming revenue was a crackdown on corruption within mainland China. Government officials were under the microscope, and that scared them and other wealthy VIP gamblers away from the table games that are so profitable for Las Vegas Sands and others.

But what could have a bigger and longer lasting impact is an economic slowdown or recession in China. VIP players are important to Macau, but mass market players are four times more profitable for every dollar they bet; if they don't have the money to gamble in Macau, the whole region is in trouble.

China's GDP growth slowed to 7.3% in the third quarter -- the slowest in five years -- and the World Bank thinks the nation's economy will grow 7.4% this year and slightly less next year. There's a real balancing act going on in China between debt and economic growth; if growth slows the high levels of debt in the country could lead to economic disaster.

The market views slowing growth in a negative light, and it's the biggest concern for Macau, but some context is also needed. Keep in mind that China is the world's second-largest economy and is growing more than twice as fast as the U.S., so it's not all bad even if growth slows somewhat.

Increased competition in Macau
There are only six gaming concessionaires in Macau, and the government limits the number of casinos they can build. So while competition for customers is fierce, there's still plenty of profit to go around and a limited supply.

But all of those six operators are building new casinos or expansions in Macau; these will add significant supply to the market, changing the competitive dynamic somewhat.

Wynn Palace on Cotai will be a big new competitor to Las Vegas Sands and expand the gaming offerings in Macau. Image source: Wynn Resorts.

If the gaming market were growing by double-digits that wouldn't be a problem, but gaming has contracted for four straight months in Macau. New resorts could dilute the market, increasing competition for high-margin players.

We've already seen some of that competition as casinos push their focus to premium mass market players because of the decline in VIP play. Add more tables to the mix and the competition becomes even more intense.

With new casinos already under construction there's no doubt increased competition is coming. What matters here is whether more visitors come to fill those hotel rooms and play table games. If they don't, profits could be down for all operators in Macau.

Competition abroad
There's a serious risk that increased competition within Macau will hurt profits, but the bigger challenge might be competition abroad. Singapore showed that building iconic integrated resorts with casinos can attract a phenomenal amount of tourism and gambling revenue (and taxes for the government), and now others are trying to follow that model.

Melco Crown is building a new resort in the Philippines, part of a major gaming expansion on the island nation. Las Vegas Sands and others are talking to South Korea about a possible integrated resort that could change gambling there. There's even talk about making another enclave in China where gambling would be legal.

But the big market could be Japan, which has talked for years about opening up gaming to a handful of companies that would spend billions to build integrated resorts. Wynn Resorts CEO Steve Wynn has highlighted Japan as a place he'd like to operate after missing out on Singapore. Lawrence Ho, Melco Crown CEO, also has his sights set on the country in a further attempt to expand beyond Macau.

If Las Vegas Sands were to win a bid in Japan or South Korea it could dilute the gaming dollars flowing to Macau and Singapore today. We've seen a similar situation in the U.S., where the legalization of gaming around the country has rendered most regional casinos unprofitable. Macau and Singapore won't fall that far, but further gaming expansion across Asia will definitely limit growth opportunities for existing casinos and potentially lead to falling revenue as customers flock to newer resorts.

Risks worth watching
I still think Las Vegas Sands presents a good risk vs. reward profile for investors, and its casinos are spitting off enough cash to fund big stock buybacks and a projected $2.60 dividend per share next year. The risks I outlined above should be watched closely, and could send the stock lower if there's even a hint that they are impacting operations, but right now I see them as fairly small threats to the stock's long-term investment thesis.