Apple (NASDAQ:AAPL), stock has absolutely smoked the broad market indices over the last year, giving shareholders a fantastic ride in the process. 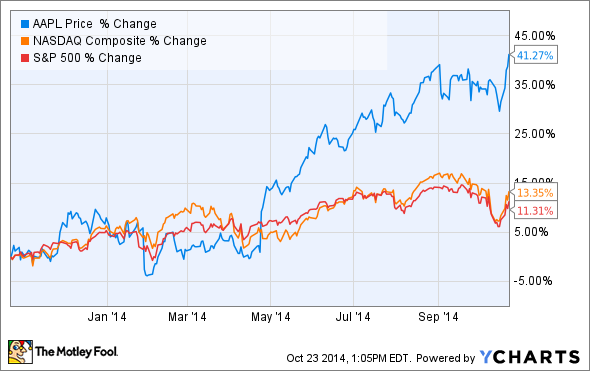 Much of this uptick, particularly in the past several months, can be attributed to the excitement over Apple's recently refreshed product cycle, notably the iPhone 6 and 6 Plus and the massive sales they're expected to trigger.

As part of its smartphone overhaul, Apple completely redesigned the hardware and form factor for the iPhone 6 and 6 Plus, echoing the Daft Punk hit in making its latest iPhones harder, better, faster, and stronger (if you're lost, Google it). However, Apple also used the iPhone redesign to introduce what is likely to be another hugely popular feature: Apple Pay, the mobile payment system that launched earlier this week.

As Apple Pay garners press and consumer attention, let's look at several of the companies that stand to gain or lose as the result of this important new feature.

Three big winners with Apple Pay
I'll lump the central beneficiaries of Apple Pay into three categories: the credit card companies, the major banks that have signed on to the system, and the hardware suppliers that enable Apple Pay's operations.

Since both banks and credit card companies benefit from Apple Pay in much the same way, I'll further lump them together for purposes of this discussion. It doesn't take an overly keen observer to note that these combined financial institutions stand to gain as the result of Apple's new payment platform. True, Apple Pay will eat into the value of each transaction (Apple reportedly receives $0.15 for every $100 of transactional value), but there's little question that the system's ease of use should help increase aggregate payment volumes for banks and expand the overall use of consumer credit for the credit card companies.  On top of seeing increased point-of-sale transaction volumes, these two kinds of financial institutions also believe Apple Pay will drive a significant uptick in mobile e-commerce sales by finally providing the kind of secure and seamless option many small websites need.  So while Apple will certainly eat into their margins, the credit card companies such as Visa (NYSE:V), MasterCard (NYSE:MA), and American Express (NYSE:AXP) and major banks like Wells Fargo (NYSE:WFC), JPMorgan Chase (NYSE:JPM), Citi (NYSE:C), are certainly right in their optimistic view of Apple Pay.

The third major winner are the companies that provide the "guts" that will make Apple Pay hum. Multiple names could serve as derivative plays, but one company here strikes me as the most singularly aligned with Apple Pay's expansion: NXP Semiconductors (NASDAQ:NXPI). This company's technology powers Apple's motion-sensing M8 chip. It's also a leader in producing near field communication, or NFC, chips that

power the tap-and-go functionality in Apple Pay. Various teardown services have confirmed the presence of NXP's NFC chips (try saying that five times fast) in Apple's new iPhones. And although Apple's latest iPads isn't available for inspection at the moment, the recent inclusion of Apple Pay in the iPad refresh also bodes well for NXP Semi.

According to industry rumors, Apple excluded PayPal from Apple Pay after PayPal inked a deal with Samsung that enables Galaxy S5 phone users to purchase items using PayPal and the GS5's fingerprint scanner. The ramifications for PayPal of being excluded from Apple Pay aren't entirely clear. However, with Apple teaming up with nearly all of PayPal's major competitors, and the likelihood of Apple Pay's eventual success, PayPal's position as the odd man out should justifiably alarm investors. Perhaps that's why no fewer than three sell-side analysts downgraded eBay stock in the wake of Apple Pay's introduction. It's also worth noting that PayPal could eventually partner with Apple, but for now, Apple Pay will only help PayPal's competition gain share in the budding mobile payments space.

The other company that Apple Pay could acutely impact, and the one that surprisingly few people are talking about, is Samsung itself. Samsung has been largely unsuccessful in fighting a two-front war over the past year: Its premium phone business has proven

lackluster, delivering back-to-back dud releases with the Galaxy S4 and Galaxy S5 while lower-cost rivals like China's Xiaomi drive down margins at the lower end of the market. With each successive release of a premium smartphone, Samsung hopes to steal some share from Apple. Its success has been limited, and the introduction of Apple Pay should only help to increase the stickiness of Apple's smartphone business as consumers will now face marginally higher switching costs from Apple to Samsung. Count on Samsung to roll out a more robust mobile payments app in the months ahead; in the meantime, Apple Pay should once again provide Apple a compelling opportunity to attract and retain more users in the most lucrative segment of the smartphone market.

Apple is the biggest winner
Overall, the introduction of Apple Pay is likely to most acutely benefit Apple itself more than any other company. Many analysts have likened the dawn of Apple Pay to another "iTunes" moment, and that's likely to be at least partly true. It's a testament to Apple's massive corporate clout that it was able to align the various entrenched interests in the payments space enough to finally bring mobile payments into the mainstream.