The United Nations estimates that the global population will increase from 7 billion today to 9 billion people by midcentury. When total population growth is coupled with a swelling global middle class, researchers believe the world's farmers will need to produce 70% more food to meet increased demand. As if that wasn't challenging enough, farmers will need to increase production on fewer acres of cultivated land, which will be replaced by urban sprawl.

That should hammer home this reality: The future of agriculture will be heavily dependent on novel technologies. But that doesn't necessarily mean we'll need to rely on more pesticides and synthetic fertilizers. In fact, the opportunity created by the need to produce more food with fewer inputs is directly aligned will the push to make agriculture more sustainable while protecting the environment and biodiversity. Thanks to some major help from industrial biotech powerhouse Novozymes, Monsanto (NYSE:MON) could prove an unlikely hero in reducing the need for pesticides and synthetic fertilizers.

Wait, what?
This was all set in motion nearly two years ago. In January 2013, Monsanto acquired certain assets of agricultural sustainability start-up Agradis, which had built a massive library of soil microbes linked to crop productivity. Monsanto also invested in and signed a five-year research and development collaboration agreement with Synthetic Genomics, one of the leading organism companies and where Agradis was born. Then, in December 2013, Novozymes and Monsanto established the BioAg Alliance to create a novel platform for developing environmentally-friendly microbial products that will help farmers around the world boost yields while reducing inputs.

What makes soil microbes so important in agriculture?

Take a field of corn as our example. We might only see or think about the stalk sticking out of the dirt, but there's an important symbiotic relationship occurring just beneath the surface. Thousands of species of soil microbes (bacteria and fungi) interact with each plant's root system -- the beneficial microbes help plants acquire nutrients from the soil, outcompete pathogenic microbes, and fend off pests. The healthier the population of microbes, the healthier the plant, and the more food a farmer can produce from each acre of land. 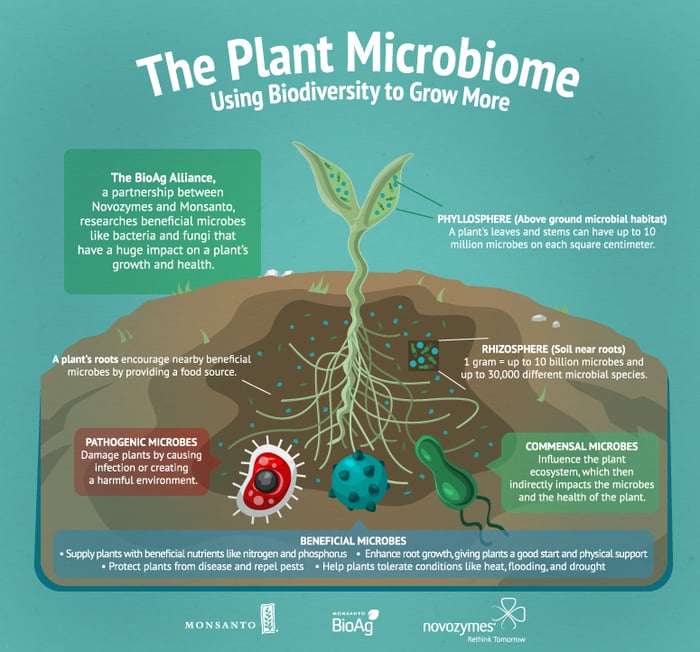 How will it work?
To develop soil microbes into commercial products, Monsanto and Novozymes will:

Exactly how microbial products will be reported in relation to Monsanto's existing business hasn't been determined, but the concentrated cells could be sold to other seed manufacturers through the company's agricultural productivity business (selling herbicides), while coated seeds could be sold directly to farmers through Monsanto's seeds and genomics business (selling seeds and genetic traits). We might find out sooner than later.

In 2014, Monsanto and Novozymes conducted research in 170,000 field trial plots in 70 locations across the United States. The number of field trial plots is expected to more than double in 2015. After seeing initial results, it's easy to see why the companies are eager to develop the platform. Microbes with commercial potential were tested in corn plots against untreated control groups across six locations. The best strain increased corn yield by 14.3%, while the ninth-best boosted yield by 7.4%. 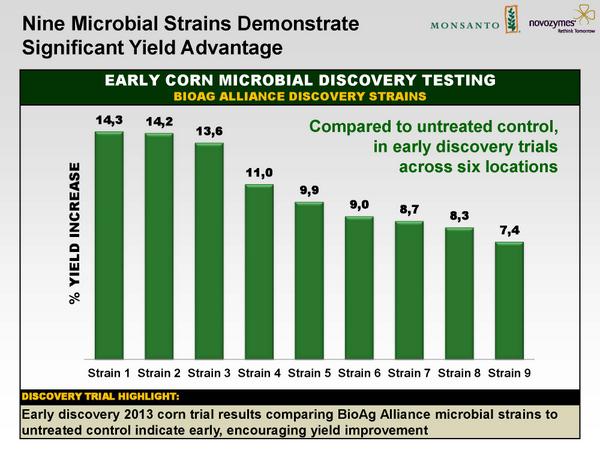 These are incredible improvements in yield for any new agricultural product, let alone in the first-ever field trials. The farmer can boost output by at least 7.4% without changing behavior (the microbial product is coated onto seeds). That's an incredible product -- and an important one for the future of agriculture.

Do good by doing good
Monsanto might be best known for its herbicide Roundup and the seeds made to tolerate its application, but its agricultural productivity business doesn't deliver nearly as much revenue or profits as its seeds and genomics business.

Therefore, it makes good business sense to develop products (or an entire platform, in this case) that could sell in high volumes and deliver high margins. Microbial products are relatively easy to manufacture, which could enable high-margin opportunities. For instance, after determining the commercial potential of a microbe and characterizing its potential risk, Monsanto and Novozymes only have to operate standard fermentation equipment to grow cells before concentrating and coating onto seeds. Here's a video explaining the entire discovery and manufacturing process:

The microbial products being developed by Monsanto and Novozymes have the potential to create a major shift in global agricultural practices and allow farmers to create more with less. Early progress, results, and usage indicate microbial products could significantly boost crop yields. Considering the ease of use for both farmers (no change in behavior) and seed manufacturers (easily applied to seeds), Monsanto and Novozymes could realize rapid and widespread adoption throughout the agriculture industry with the BioAg Alliance. This portfolio of products could provide a significant future growth business for investors while helping to eventually reduce the need for pesticides and synthetic fertilizers applied worldwide. If that isn't a win-win scenario, then I don't know what is.