Google might have $100 billion in cash by 2016, but it’s unlikely to pay it back to shareholders as a dividend.

Google (GOOG 2.36%) (GOOGL 2.39%), which has seen its stock go nowhere over the past year, finished last quarter with $62.2 billion in cash and equivalents. According to Bernstein Research analyst Carlos Kirjner, that cash pile could grow to over $100 billion by the end of 2016. Kirjner, like many investors, believe that Google should reward its shareholders with a dividend, especially after Apple (AAPL 2.14%) brought back its dividend in 2012. 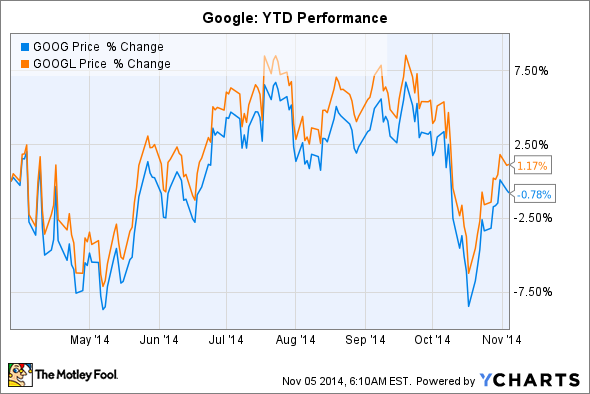 Yet Google clearly states on its investor website that it does not "expect to pay any cash dividends in the foreseeable future." The argument is simple -- it needs ample free cash to make big acquisitions, invest in new in-house technologies, and pursue "moonshots" like driverless cars, robots, and genetic databases. Moreover, offering a dividend and buying back stock is generally considered an admission that a tech companies' high growth days are over.

Therefore, let's take a look at why Google doesn't pay a dividend, and why it doesn't care if investors want one or not.

Why Google should pay a dividend
The key to paying out a dividend is a healthy cash flow. Google's free cash flow has been rising over the past decade, but it's certainly been a bumpy ride due to the company's series of hit and miss acquisitions. 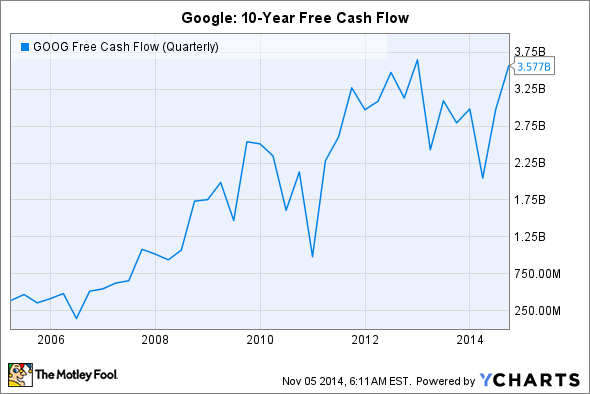 But there have also been busts, including travel search engine ITA Software, radio advertising platform dMarc Broadcasting, and social app developer Slide. It also recently sold Motorola Mobility, which it purchased for $12.5 billion in 2012, in two much cheaper pieces (set-top boxes and handsets, respectively) to Arris and Lenovo for $5.26 billion. Google has also invested in expensive projects like Calico (its biotech subsidiary), driverless cars, Wi-Fi weather balloons, and delivery drones.

While Google might argue that these bold strategies ensure that it gains a toehold in many promising technologies, it can also be considered undisciplined and wasteful. If Google pays out a portion of its FCF as a quarterly dividend, then it might think twice before investing heavily in untested companies or experimental technologies.

Paying out a dividend would bring in new investors and possibly stabilize the stock and cause it to rise. Improving stock prices could help Google retain more of its employees with more lucrative stock options, since the company still has one of the highest turnover rates in Silicon Valley, according to Payscale, despite its well-known perks.

Why Google doesn't care if you want a dividend
Google can certainly afford to pay a dividend, but that doesn't mean it wants to. Google prevents activist investors from pressuring the company to do anything via its share class system.

There are currently three classes of Google stock -- A, B, and C shares. Everyday investors can only buy A or C shares on the open market. A shares (GOOGL) are entitled to one vote, while C shares (GOOG) are entitled to zero votes. The C shares split off the original class A shares last year during its 2 for 1 split. Google uses A shares to pay its employees and fund acquisitions. Meanwhile, B shares, which are entitled to ten votes each, are only owned by Google's founders and their inner circle.

Simply put, B shares give Google's top brass the power to defend against any shareholder revolt. Shareholders united against that plan at a previous meeting, casting 180 million votes in favor of the elimination of share classes. Larry Page, Sergey Brin, Eric Schmidt and others crushed the proposal with 551 million votes.

This tactic ensures that any decision Google makes on dividends or buybacks will be made on its own accord, rather than forced through by shareholder pressure.

Does it matter that Google doesn't pay a dividend?
Google isn't the only company that uses a dual-class share system. Facebook and Ford. both issue dual class shares to protect the company from hostile takeovers and activist investors.

While that might not seem fair, dual class systems don't really matter to everyday investors who only own 100 to 1,000 shares of a company. When we look at Apple, we see the perils of letting an activist investor call the shots. Carl Icahn, who owns 53 million shares of Apple, has been pressing Apple to buy back more shares and develop 4K smart TVs. Those demands are distracting, and exactly the kind of drama Google hopes to avoid with triple class shares.

What it all boils down to its growth. As long as Google tops analyst expectations and its share price keeps rising, investors will be happy. But once that growth tops out, as we recently saw with Google's disappointing top and bottom line miss in the third quarter, it might need to pay a dividend to keep investors from dumping the stock.