In many aspects of the automotive business, Ford Motor Company (NYSE:F) clearly demonstrates it is ahead of crosstown rival General Motors (NYSE:GM). On the flip side, one aspect where General Motors clearly dominates continues to grow in importance: success in China.

China's automotive market is exploding with growth. Despite it already being the world's largest auto market, China's automotive sales are expected to continue surging to top 30 million annually by the end of this decade. For comparison's sake, the U.S. and European markets are respectively expected to check in around 17 million and 15 million vehicles sold annually.

So, just how dominant is General Motors, and is there a silver lining for Ford investors?

Looking specifically at China's October sales by automaker, General Motors soundly outsold Ford with 291,371 units, compared to the latter's 93,179 units sold. When looking at a slightly longer time frame, through the first 10 months of this year, GM's sales surpassed 2.8 million in China -- an increase of nearly 11%.

Despite Ford falling far short of its competitors' sales mark, checking in at just over 900,000 units sold, it has continued to build momentum with its 22% sales surge through October compared to last year. 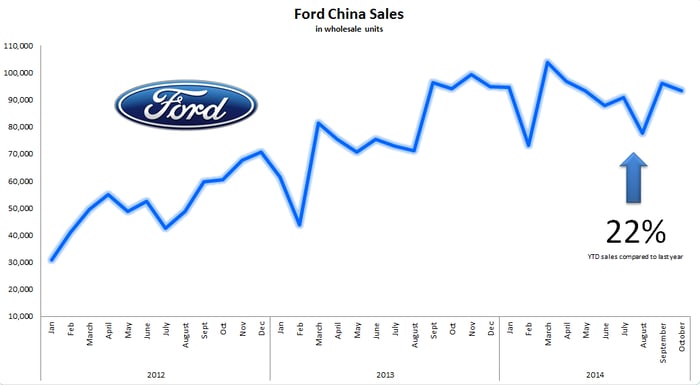 Silver lining
Sure, Ford trails General Motors by a long shot in the world's largest automotive market, and one of the world's most important markets, but there's definitely a silver lining in the numbers.

First, we have to consider that a large reason behind Ford's smaller sales figures is the fact that the Dearborn automaker was years late entering China. However, Ford has poured billions of dollars into its expansion strategy to help make up for lost time. Below, you can see that while Ford trails the top foreign dogs in the sales race, it is increasing its annual sales at the fastest rate -- figures are through the first half of this year. 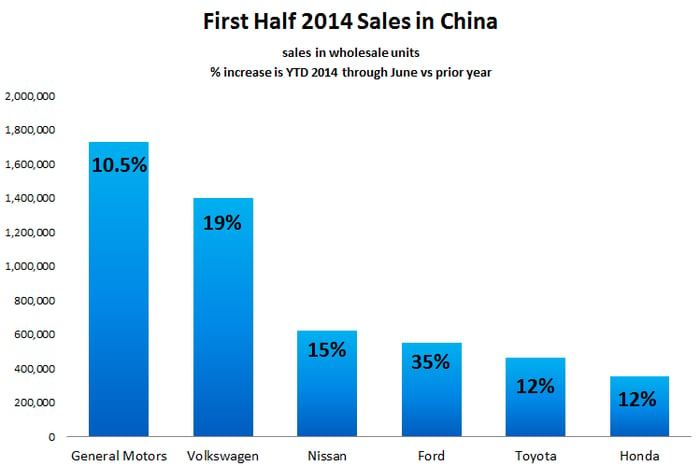 A second, albeit smaller, silver lining is that Ford's Mondeo (the slightly tweaked Fusion) broke 100,000 sales through the first 10 months of this year. That's a huge increase from the 51,748 units it sold through the same time frame last year.

Looking ahead
As demand continues to surge for Ford's new models, the automaker recently launched its third assembly plant in China through a $600 million investment that will increase vehicle capacity by more than 350,000 vehicles. In addition to that plant, Ford is also bringing online five factories in its Asia-Pacific region over the next nine months.

On top of surging demand for the Ford brand, the automaker is also launching its Lincoln luxury lineup into the region as wealthier consumer numbers continue to explode in Cjhina.

Rather than compare sales numbers between Ford and General Motors, despite how often this is done, what investors need to watch for is whether Ford meets its short- and medium-term goals in the region. Ford is hoping that by the end of 2015 its $5 billion strategy for expansion will have doubled its market share from 3% to 6% -- Ford currently has a 4.7% share in China -- and will bring its Asia-Pacific region closer to representing 40% of company sales by the end of the decade, compared to roughly 15% last year.

Achieving both of those goals is something that will become incredibly important for the folks at the Blue Oval and investors alike.

Ford Motor Company Is Being Crushed in China: What Investors Should Know @themotleyfool #stocks $F $GM Next Article
Current