On Monday, 3D Systems (NYSE:DDD) released its official third-quarter earnings results, which didn't offer any new surprises compared to its preliminary third-quarter earnings that warned investors of prolonged manufacturing constraints and product shipment delays, and forced the company to trim its full-year guidance.

For the quarter, 3D Systems grew revenues by 23% year over year to $166.9 million, translating to $0.03 in earnings per share, or $0.18 per share on an adjusted basis. Analysts had lowered their expectations going into the report -- and 3D Systems' official results fell in line with the reduced consensus of generating $167.7 million in revenue and earning $0.17 per share on an adjusted basis. Overall, there were some encouraging aspects of 3D Systems' earnings, and some areas where it should work to improve in the future.

The bright spots of 3D Systems' earnings include a 121% year over year increase in its healthcare-related revenues, a 57% increase in design and manufacturing 3D printer sales by volume, and a 214% year-over-year increase in its direct-metal 3D printing revenues in the first nine months of 2014. Collectively, 3D Systems' design and manufacturing revenue represented more than 92% of the company's total revenue for the quarter. Additionally, 3D Systems' strong operational performance across these high-growth segments suggests that the products that make up the majority of 3D Systems' revenue are faring well in the marketplace.

3D Systems fell short in consumer revenues and not being able to keep up with demand of its direct-metal 3D printers. In the second quarter, 3D Systems delayed shipping its next-generation consumer 3D printers in an effort to improve the user experience, which spilled over into the third quarter, and ended up dragging consumer revenues down by 13% year over year to $11.8 million. Shipments are now officially under way and management expects that it should be able to drive revenue growth from the consumer segment in the fourth quarter.

On the metals front, 3D Systems has oversold its direct-metal 3D printing manufacturing capacity in every quarter since it acquired Phenix Systems in mid-2013. Consequently, 3D Systems opted to build a second manufacturing line, which is coming online now and should be fully operational in the first quarter of 2015 with sufficient capacity to meet growing future demand. In other words, 3D Systems' ongoing capacity constraints for its direct-metal 3D printers should begin to subside in the coming quarters.

An inverse relationship
Due to the persisting metal 3D printing capacity constraints and delayed consumer 3D printer shipments during the quarter, 3D Systems' organic growth rate -- the rate of annual revenue growth that doesn't account for acquisitions less than a year old -- continued to disappoint. 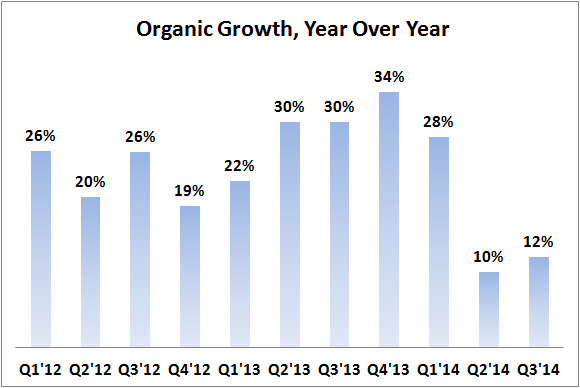 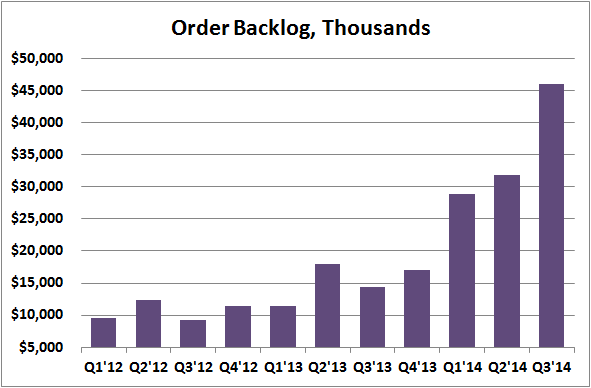 Despite these execution-related missteps around its consumer and direct-metal segments, 3D Systems' growing order book suggests that the underlying demand for its products and services remains unabated.

The margin story
3D Systems' third-quarter gross profit margin held steady from the second quarter, but fell about 480 basis points year over year. By segment, a rebound in 3D Systems' lush materials gross profit margin counterbalanced the slide that its 3D printers and products experienced -- the latter of which represented about 44% of total sales. 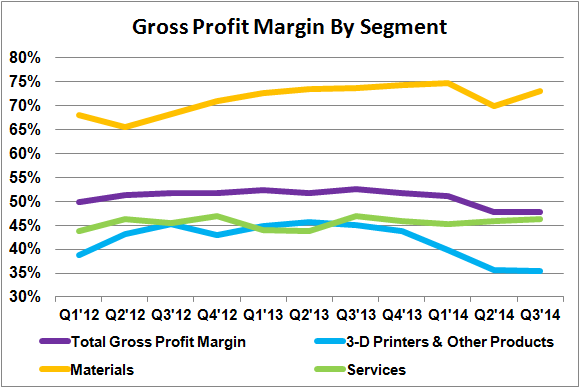 Although 3D Systems has attributed its declining product gross profit margin to a variety of temporary factors, including a high concentration of upcoming product launches and manufacturing capacity build-out, investors should continue to monitor the profitability of the company's printers and products to make sure more serious issues like pricing pressures aren't driving margins lower. After all, companies that can maintain their profitability in the face of increased competition often offer a differentiated product, and gross margins can provide added insight into this area.

A short-term trade-off
To capitalize on its market opportunity, 3D Systems' operating expenses continued to trend higher in the third quarter, and came at the expense of operating profits and net income. In other words, 3D Systems remains more focused on the long-term operating performance of the business than with short-term results. 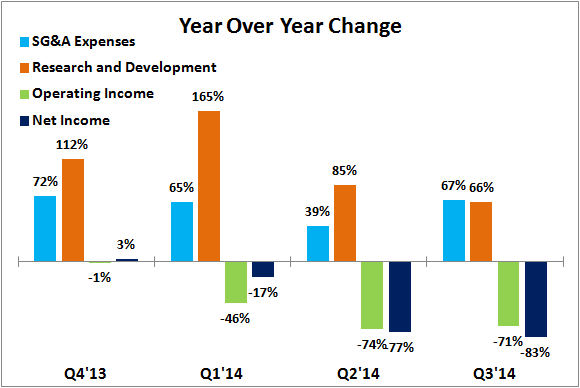 Longer term, 3D Systems' management anticipates that its stepped-up investment in operating expenses will begin to normalize and will result in the company's operating leverage becoming more pronounced.

Inventories still rising
3D Systems' inventories continued to rise in the third quarter, which management attributed to acquiring Simbionix, a leading surgical simulation equipment company, and also from a buildup of inventory for existing products, especially around the ramping-up of its second metal 3D printing manufacturing line. 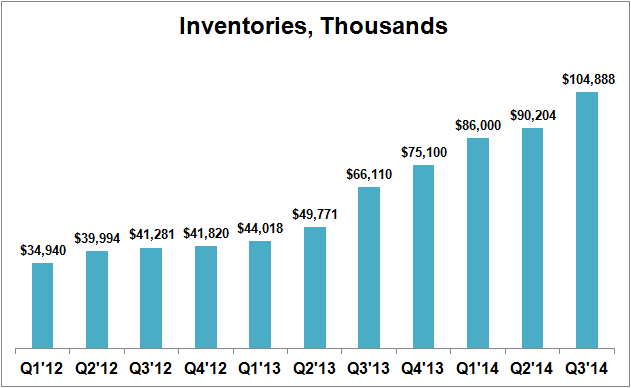 Given the nature of 3D Systems' inventory build and how it was in line with its sequential revenue growth on a total dollar basis, it doesn't appear to be raising any major flags.

It appears that the worst of 3D Systems' temporary execution issues around manufacturing constraints and delayed product shipments will soon be behind it, and investors should look for signs of improvement on this front in future quarters. However, 3D Systems' gross profit margin, particularly on the 3D printers themselves, is an area of concern that investors should continue to monitor going forward.

Execution issues aside, 3D Systems' earnings were quite decent for a company in the middle of a heavy investment period and actively working to improve its execution. As a long-term-focused 3D Systems shareholder, there isn't enough here for me to take action either way, so I'll simply continue holding on to my shares.