With the dust settled and the news of the accounting misgivings that sent American Realty Capital Properties (NYSE:VER) shares down nearly 40% a few weeks behind us, it's time to take a look at both what happened, and what it means for investors.

And the first line was even more jarring, as the release began [emphasis added]:

[ARCP] announced today the conclusion of its Audit Committee that the previously issued financial statements and other financial information contained in the Company's Annual Report on Form 10-K for the fiscal year ended December 31, 2013 and Quarterly Reports on Form 10-Q for the fiscal periods ended March 31, 2014 and June 30, 2014, and the Company's earnings releases and other financial communications for these periods, should no longer be relied upon.

In short, the company wrongly included income it received from non-controlling interests in other properties into its adjusted funds from operations (AFFO), which is the near equivalent of net income for real estate investment trusts (REITs). As a result, ARCP revealed its preliminary adjustments would result in the company revising its per share AFFO down from $0.49 through the first six months of 2014 to $0.44.

But the problem was not just an error, because after its investigation, the Audit Committee noted that it "believes that this error was identified but intentionally not corrected, and other AFFO and financial statement errors were intentionally made, resulting in an overstatement of AFFO and an understatement of the Company's net loss for the three and six months ended June 30, 2014."

Making accounting errors is one thing, but making unintentional errors and then covering them up is another. Add to that errors made intentionally? That is an entirely different story.

It should come as no surprise this prompted the resignation of both its chief financial officer and chief accounting officer, who "had key roles in the preparation of those financial statements."

Bloomberg also reported that ARCP is now currently under investigation by both the FBI and the SEC.

In the days following the news, the company also alerted investors that RCS Capital (NYSE: RCAP) had rescinded its agreement to purchase Cole Capital, a subsidiary of ARCP, but ARCP suggested "RCS has no right and there is absolutely no basis for RCS to terminate the agreement."

And to add to all that, just days ago, The Wall Street Journal reported that part of the reason the errors were made "were tied in part to the computation of bonus payments, according to a member of the company's board."

While there has been a slight rebound, as a result of this turmoil, at the time of writing, the company has still seen its stock price drop by more than 30% since the news was first announced: 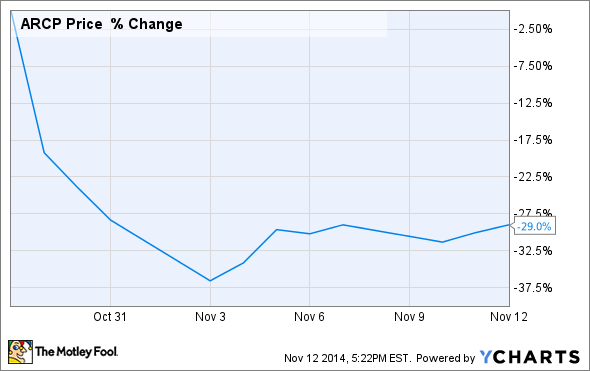 What to make of it all
There is much to digest in all of this, and a definitive conclusion is still difficult to come to. But the remarks from ARCP's CEO, David Kay, at the time of the announcement are worth noting:

The accounting issues are unacceptable and we are taking the personnel and other actions necessary to ensure that this does not happen again. As disappointed as I am, I do not believe that this impairs, in any meaningful way, what is important about our Company -- the high quality and diversification of our real estate assets, the depth and strength of our management team, the strong and predictable cash flows from our leases, the strength of our balance sheet and the size of our market opportunity.

To suggest "the depth and strength of our management team," is an asset to the company following the resignation of two of its top executives for -- it bears repeating -- "errors [that were] identified but intentionally not corrected," and "financial statement errors [that] were intentionally made" is simply odd and somewhat disconcerting.

Perhaps it was just a remark intended to lend credence and credibility toward the new CFO and CAO, but it is nonetheless hard to understand how such a statement could be made following such a critical mistake by internal management.

However, even with the scandal, this doesn't change the fact that the foundational business model of ARCP remains attractive. And while we're still waiting for the dust to settle and the final numbers to be revealed, all signs indicate the company will also be trading an even steeper discount to its other REIT peers than it was in September.

This error notwithstanding, ARCP has undergone massive changes over the last year and a half. And while there may be sizable upside in buying shares of the company as a result of market overreaction, I think more time needs to pass and facts revealed before any truly informed decision can be made.