Please ensure Javascript is enabled for purposes of website accessibility
Log In Help Join The Motley Fool
Free Article Join Over 1 Million Premium Members And Get More In-Depth Stock Guidance and Research
By Adam Levy – Nov 18, 2014 at 9:00AM

A subscription music service doesn't take advantage of all Twitter has to offer. 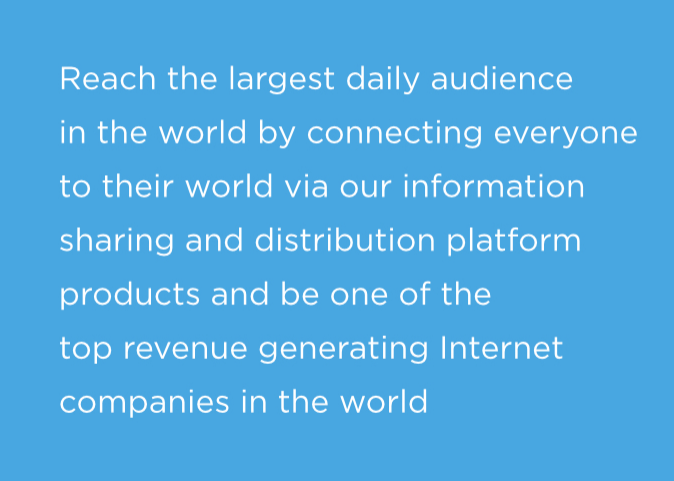 The problem, Noto pointed out at Twitter's analyst day, is that a music subscription service doesn't play into Twitter's competitive advantages or fit into its strategy.

While sharing music is one of the most popular uses for Twitter, it's more about what users are listening to right now -- playing into the real-time aspect of Twitter's platform. Twitter's resources are better spent improving its core sharing and distribution product, but that doesn't mean its going to completely ignore music going forward.

Knowing its strengths
In his presentation, Noto pointed out that Twitter has certain competitive advantages that will allow it to succeed: it's large global audience, unique content, real-time public distribution, a global brand, partnerships, unique data sets, platform ubiquity, and a superior monetization model.

A music streaming service will take advantage of Twitter's large audience, which is dwarfed by other companies already doing music streaming like YouTube. It will also play into Twitter's data business, but the company already gathers plenty of data from its users sharing music organically.

I guess it's not going to buy Soundcloud after all
When Twitter announced a new debt offering a couple months ago to raise $1.8 billion, I noted one use for the new cash influx could be the purchase of Soundcloud. Most music sharing on Twitter uses links to Soundcloud, and more recently Twitter enabled Audio Cards, which let mobile users dock streaming music while they read other tweets.

Twitter still seems intent on serving the market of music, though. It's core product is a sharing and distribution platform, and that's exactly what musicians and music fans need when it comes to music. Hence, the improvements to Audio Cards and the addition of iTunes streaming and linking.

Investors can expect Twitter to continue innovating with its music related products. It already works with Billboard to provide data for its Trending 140 singles chart, and thousands of musicians have a strong presence on the platform. As long as it serves to better engage Twitter's user base by providing real-time information distribution and sharing, it fits Twitter's strategy.

But Twitter doesn't think it can do music streaming better than the competition, so it's going to stay away from it. Adding Soundcloud won't change the picture for Twitter.

So, what's Twitter going to do with its cash?
After Twitter's bond offering, the company is now sitting on $3.6 billion in cash.

At the analyst day, CEO Dick Costolo said investors can expect the company to accelerate the pace of product change. That means things like improving the user experience, particularly for new users, engaging its audience of both logged-in and logged-out users, and improving the onboarding process to get more users to sign up.

Costolo also mentioned the company would be working on new stand-alone apps, taking a page out of Facebook's (META -1.69%) constellation strategy. Facebook has steadily released new apps, even going as far as forcing users to download Facebook Messenger to continue using the feature on mobile. The results have been astounding, with Messenger doubling its users base to 500 million in short order and Instagram users now spending an average of 21 minutes per day on the app. That's engagement Twitter can only dream of.

Currently, Twitter has just one stand-alone app outside of its flagship product, Vine. The six-second video app is responsible for a large amount of video uploads to Twitter and fits well into Twitter strategy and competitive advantages. New stand-alone apps could include a messaging service, which management talked about throughout the analyst day, or a breaking news app, which Twitter incorporates on a limited basis into its main product currently.

Twitter has enough problems as it is
That bond offering I mentioned earlier just got slapped with a BB- rating from Standard & Poor's, indicating the ratings company believes Twitter faces a lot of uncertainties in the long-term outlook of its business.

Indeed, monetizing those 500 million logged-out visitors and converting more of them to active users will be key. Twitter's user growth has slowed, so if it wants to reach its strategic goal of reaching the largest global audience, it has to fix that problem first.

The company's focus should be on solving its current problems before it steps into an industry where none of the competitors have yet to turn a consistent profit.