Do you think banks make for miserable investments and are only good for holding your money? One company is attempting to place itself as not only a great place for consumers to park their dollars, but investors as well.

The long road for all but one
As colleague John Maxfield outlined, the banking industry as we know it is has just navigated through one of the most remarkable periods of change in our nation's history. John notes as a result of heightened regulation:

It's difficult to imagine a realistic scenario in which banks will be as profitable in the future as they were before the crisis. This doesn't mean certain banks won't continue to generate outsized returns. But it does imply that it might be best for individual investors to avoid the industry as a whole for the foreseeable future.

And I couldn't agree with him more. But with every rule there's an exception, and in every crowd, an outlier. And in the banking industry, Discover Financial Services (NYSE:DFS) is positioning itself to be just that.

If you build it, they will come
In June of 2007 -- just before the financial crisis abruptly changed the banking industry -- Morgan Stanley (NYSE: MS) announced it would officially spin-off Discover into its own separate company.

When the announcement was made, the CEO of Discover, David Nelms said, "We believe we are well positioned to build on the success we have achieved as part of Morgan Stanley."

And build on that success it has. Since it went public seven and a half years ago, it has outpaced the total return delivered by some of the most highly esteemed companies in banking, including Wells Fargo, US Bancorp, and M&T Bank: 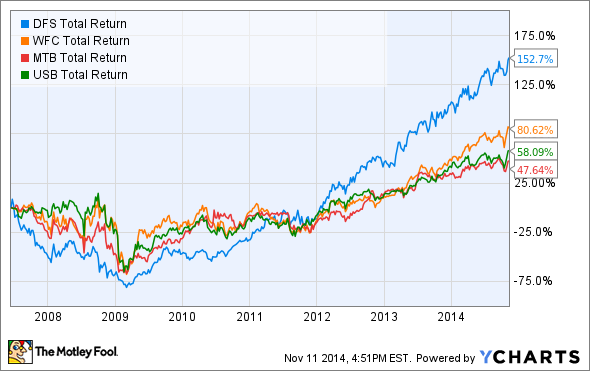 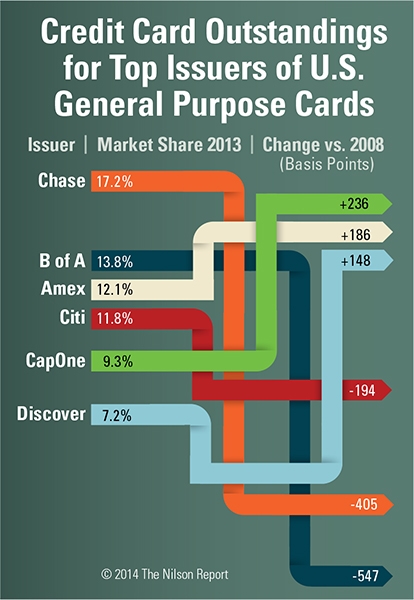 And this comes even after the fact that Discover saw its stock price fall more than 75% from its IPO level during the depths of the crisis in 2009.

What is the reason for Discover's strong performance?

As shown in the chart to the right provided by The Nilson Report, Discover has watched its share of the credit card market continue to expand.

Although the growth at Discover hasn't outpaced American Express and Capital One, it is worth recognizing because both its earnings and revenue have continued to rise since the depths of the financial crisis: 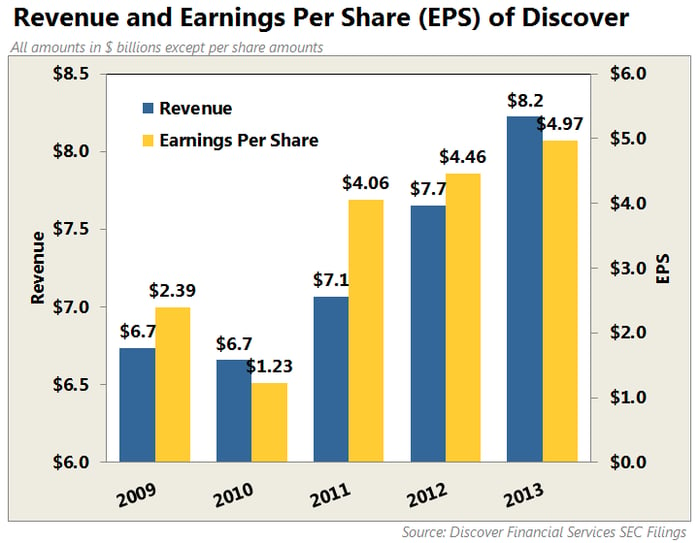 But it isn't only the past successes of Discover which make it compelling. Instead, it is what the future may hold.

The compelling case
Unlike most of the companies mentioned, Discover is moving in an entirely different direction. Unlike banks that attempt to push credit cards to customers who have checking accounts, Discover is attempting to become a credit card company that draws its customers to open checking and saving accounts with it.

This is a critical distinction. Currently in the U.S. one in every four households has a credit card with Discover. But it isn't just that they have credit cards with Discover -- they love them.

According to Satmetrix, a consultancy focused on customer experience, Discover has the most loyal customers in the credit card industry. In addition, Discover also tied with AmEx for the top spot in J.D. Power's 2014 U.S. Credit Card Satisfaction Study.

Why is this important? Consider legendary investor Warren Buffett's words:

If we are delighting customers, eliminating unnecessary costs and improving our products and services, we gain strength. But if we treat customers with indifference or tolerate bloat, our businesses will wither. On a daily basis, the effects of our actions are imperceptible; cumulatively, though, their consequences are enormous. 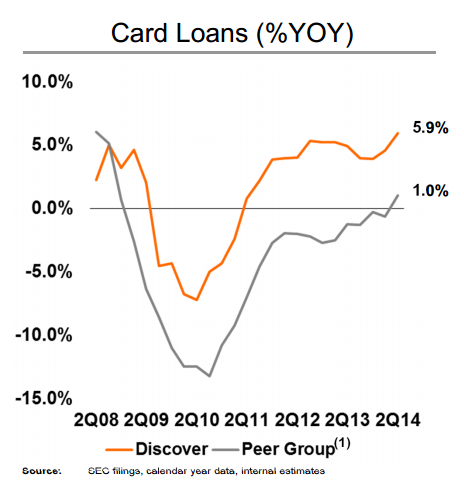 Through its focus on customer service, Discover has continually been able to grow its credit card loans at a rate faster than its peers, as shown in the chart to the right.

In short, thanks to highly esteemed customer service, this growth has no sign of slowing down anytime soon.

But it is attempting to become to much more than a credit card company.

To banking and beyond
As shown in its strategic plan, Discover is seeking to use the same practices that have made its credit card business successful to propel its banking business as well:

Unlike the acquisition of 420 RBC Bank branches by PNC in 2011, Discover is not trying to gain customers by simply buying them.

Instead, Discover is providing individuals the opportunity to have a bank that provides the best customer service and an easy to use online banking platform. As a result, since it doesn't have the overhead costs of branches, Discover offers savings accounts at rates over five times the national average.

This indicates Discover is positioning itself to not only meet the most critical banking needs of three out of four Americans, but meet them in the best way possible, suggesting its prospects for growth are enormous.

The financial side of things
While all this may be good for consumers, the natural next question is: What does this all mean for investors? No investment decision should only be made based on factors surrounding the business itself without considering financial performance. And Discover shines here too.

In 2013, Discover's return on equity stood at 24%, three times higher than the average of 8% offered by its peers. And these numbers didn't come as a result of excessive risk; the 2014 Comprehensive Capital Analysis and Review revealed Discover had the highest Tier 1 common equity ratio among a peer group including American Express, Wells Fargo, JPMorgan Chase, Capital One, and others.

This means Discover offers not only the highest return among its peers but also has the greatest level of protection in the event of losses on its balance sheet.

But do these highly profitable returns cause Discover to trade at a premium and fall into the overvalued bucket? Currently, its price-to-tangible book value multiple -- the measure of its market value relative to the tangible value of a bank if every asset were sold and debt was paid back -- is 3.0.

Although this is above the large-bank industry average of 2.0, according to S&P Capital IQ, when you consider just how much greater Discover's returns are, the premium seems more than reasonable.

And we haven't even mentioned Discover has aggressively repurchased its stock and reduced its common shares outstanding by more than 15% over the last three years: All this makes it easy to see Discover is doing all in its power to ensure it continues to deliver remarkable returns to its shareholders.

The final thought
In June, the consultancy Bain released a report entitled Building the Retail Bank of the Future. The press release began by noting:

The banking industry is rife for change. Consumers want it. Discover is prepared to give it. Investors can delight in it.