When Apple (NASDAQ:AAPL) released the iPhone 5 powered by its home-grown A6 system-on-chip, AnandTech was one of the first -- if not the first -- to point out that Apple had, in fact, designed its own CPU core rather than license one from ARM Holdings (NASDAQ:ARMH). This signaled, perhaps quite loudly, that Apple was extremely serious about building up its in-house chip design capabilities.

While the world was shocked at the performance of Apple's A7 and the Cyclone core within when it first made its debut in the iPhone 5s, I'm confident that Apple's A9 is going to be an even bigger step forward than the A7 was.

Apple's A9 benefits from a substantially higher R&D budget

Apple has hired engineers from many of the top chip development houses in the world including Intel (NASDAQ:INTC), ARM Holdings (NASDAQ:ARMH), and IBM (NYSE:IBM). Although Apple got an excellent team when it acquired PA Semi in 2008, Apple's continued financial success over the years has allowed it to invest very heavily in attracting and retaining even more of the industry's best and brightest.

However, while Apple's chip team is great, the results that we're seeing in chips such as the A6, A7, and A8 are efforts that began years back. For example, this graphic from ARM Holdings helps give investors a flavor of how long it takes to put together a chip from start to finish: 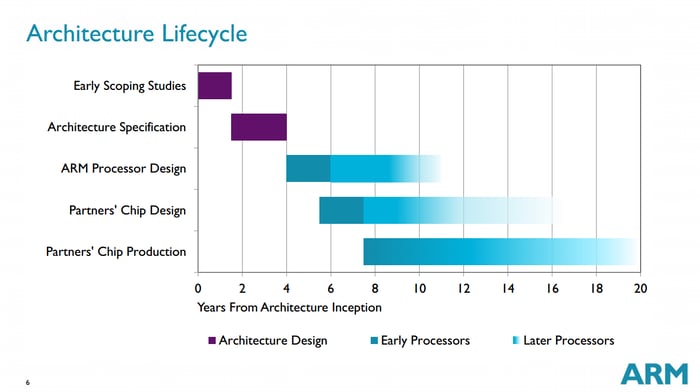 To put this into perspective, using the ARM information as a rough guide, here's a table showing my estimates of when Apple could have started and finished the development of its most recent three system-on-chip designs:

The above would suggest that Apple began work on what will likely be the A9/A9X chips at some point in mid-2012. In order to understand what this might mean, let's take a look at another very relevant Apple-related chart: 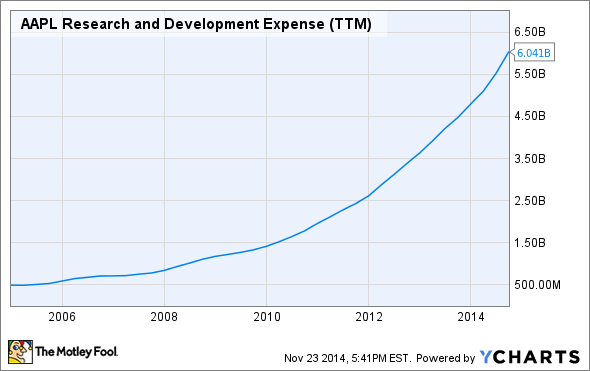 What's the ultimate point here?
The point I'm trying to make is that the impressive chips that Apple has packed its currently released iDevices with likely didn't have anywhere near the resources dedicated to them as what future Apple chips will have. With a much larger budget and many of the world's best chip engineers all working on just a handful of processors, we haven't even come close to seeing what Apple's mobile processors can do. I, for one, can't wait to see what Apple has planned for the A9 -- and beyond.