Please ensure Javascript is enabled for purposes of website accessibility
Log In Help Join The Motley Fool
Free Article Join Over 1 Million Premium Members And Get More In-Depth Stock Guidance and Research
By Rich Smith – Nov 29, 2014 at 9:39AM

"There are those that see JSF as the last manned fighter. I'm one that's inclined to believe that."
-- Adm. Mike Mullen, chairman of the U.S. Joint Chiefs of Staff

Designed to mirror the capabilities of the F-22 and F-35, China's Chengdu J-20 fighter and its recently unveiled Shenyang J-31 were both designed -- or so the rumor goes  -- from top-secret blueprints stolen by Chinese hackers. So while China's "stealth" planes are not yet operational, it seems likely that China's Air Force will soon boast a stealth capability rivaling our own. Meanwhile, a newly aggressive Russia is also hard at work developing a fifth-generation stealth fighter.

All of which has U.S. generals thinking that right about now would be a good time to start thinking about developing a new kind of fighter jet.

Hold up a sec. Didn't Admiral Mullen say ...?
I know, I know. This seems to fly in the face of the 2009 assertion from Admiral Mike Mullen -- then chairman of the U.S. Joint Chiefs of Staff --  that the F-35 would be our "last manned fighter." Five years ago, we really thought this might be how things played out -- that the fifth-generation F-35 would also be the "last generation" of American fighter jets, giving Lockheed Martin a de facto monopoly on fighter jet production till the end of time.

But the thing is, times change, and so does technology. Five years on, the tech gap between America and its rivals has narrowed.

What's to be done
According to the defense journalists over at DefenseNews.com, "Potential adversaries are spending big on technology, and the U.S. can't afford to fall behind." It might even be nice if the U.S. could stay a step or two ahead. With that in mind, the Pentagon is putting together a wish list for things they'd like to stick in a new "F-X, next-generation air dominance" fighter jet:

For example, it might be nice if the new jet could fly at hypersonic speeds -- Mach 5 and up -- like Lockheed Martin's experimental Mach 6 SR-72 ...

Of course, fighter jets don't just travel in straight lines but are able to maneuver at high G-forces as well. The Pentagon is thinking that 9 "gees" might be just about right ...

The Boeing F/A-18 Super Hornets flown by the Blue Angels are designed to stand up to g-forces of 7.5G.  Photo: Wikimedia Commons.

Twin engines -- in place of the single, dual-directional, United Technologies (RTX -0.11%)-built F135 engine on the F-35 -- would help with both these tasks.

Equipped with a Pratt & Whitney F135 engine, the F-35 can hover. But can it race? Photo: Lockheed Martin.

Meanwhile, for the "fighting" portions of the fighter jet's mission, the Pentagon suggests it might arm the F-X with directed energy weapons -- laser guns -- such as Kratos Defense & Security's (KTOS -2.51%) 33-kilowatt Laser Weapon System, or the new, smaller, 25-kw laser that Raytheon (RTN) is building for the Army.

As U.S. Air Combat Command's Col. Tom Coglitore points out, "lasers have made significant progress over the last decade or two." With pretty much every defense contractor you can name now running a laser weapons project, Mark Gunzinger, retired Air Force colonel and senior fellow at the Center for Strategic and Budgetary Assessments, avers that laser guns on airplanes are "no longer a pipe dream." 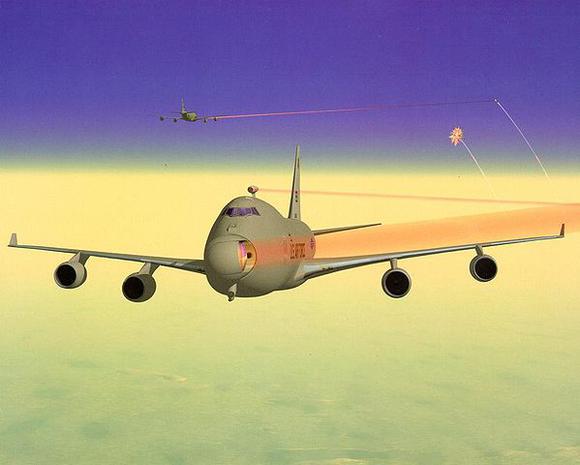 The U.S. Air Force has been experimenting with flying laser guns for years. Photo: Wikimedia Commons.

Last but not least, the Pentagon continues to like the idea of "optionally piloted" warplanes, which can carry a human pilot if need be -- but which could also be piloted remotely, or by an on-board robot.

"Attention! This is your captain beeping." Photo: Wikimedia Commons.

Who will build the F-X fighter jet -- and when?
When the F-35 Joint Strike Fighter was first announced more than a decade ago, we were told that the Air Force intended to build and fly these birds for a good six decades or more -- well into the 2070s. But already, there's talk of starting up an acquisition process for F-X by 2018, and of bringing the first sixth-generation F-X fighter to market as early as the 2030. So it seems Lockheed's F-35 could cease to be America's "last manned fighter" a lot sooner than any of us expected.

But who will build its replacement?

The short answer to that is probably Lockheed Martin. After all, the incumbent fighter jet-producer has a built-in advantage in these types of projects -- if for no other reason, then because it's got the most, and the most current, experience in building fighter jets.

The longer answer, though, is that there are enough items on the Pentagon's F-X fighter jet wish list to provide work for most, if not all, of the major defense contractors. Lockheed's got the pole position in fighter jets and their stealth technology, obviously. But Boeing's no slouch in aerospace, either. Both of these companies, and Raytheon and Kratos besides, have invaluable experience building laser weapons. Northrop Grumman (NOC -0.05%) is tops in building unmanned aerial vehicles. United Technologies can build the engines -- you get the picture.

Long story short, if the F-X air dominance fighter jet does get built, there will be more than enough work -- and profits -- to go around.

Rich Smith owns shares of Raytheon. The Motley Fool recommends BMW and Nike and owns shares of Lockheed Martin, Nike, Northrop Grumman, and Raytheon. Try any of our Foolish newsletter services free for 30 days. We Fools don't all hold the same opinions, but we all believe that considering a diverse range of insights makes us better investors. The Motley Fool has a disclosure policy.

3D Printing Is About to Explode; Here's 1 Way to Profit From It