If you're a Caterpillar (NYSE:CAT) or Manitowoc (NYSE:MTW) investor, brace for a tough time ahead. The sharp slump in oil prices may have sent energy investors scurrying for cover, but you could lose big too as an investor in either of these heavy-machinery stocks. And it could get pretty ugly. I'll tell you why.

Why Caterpillar could have a hard landing
With the mining industry in a rut and international construction markets slowing down in recent months, the onus to help Caterpillar sail through the challenging times rests on its energy and transportation business. E&T came into the spotlight after it emerged as the company's largest and most profitable division last year, contributing 40% and 54% to its total machinery sales and operating profits, respectively.

While E&T serves diverse industries, oil and gas happens to be one of its primary end markets, which is where the problem lies.

With OPEC ruling out production cuts, U.S. oil companies may be forced to defer projects and slash capital spending -- and that could deal a heavy blow to Caterpillar's engines and turbines sales. How bad can it get? Management nearly gave away the answer during Caterpillar's last earnings call.

More notably, Caterpillar CEO Douglas Oberhelman sent out a warning signal when he weighed in on how oil prices in the "low $70s on a sustained basis" would send a "chill across the market." Oberhelman considers a U.S. oil price in the mid-$80s as a sustainable level for the overall industry. As of this writing, U.S. crude is well below the $70 mark, and no one really knows where it's headed.

Worse yet, a slowdown in the oil and gas industry could also hurt sales for Caterpillar's construction equipment that supports energy-related infrastructure activities. That'll be a double blow for the heavyweight. Remember, ongoing challenges (read: mining malaise) have already forced Caterpillar to shut down plants and initiate massive layoffs. If construction and E&T get into trouble, the company could find itself in a deep mess.

Manitowoc is already feeling the heat
Why should lower oil prices hurt a company that specializes in cranes and foodservice equipment? Diversity is to blame.

Despite strong U.S. construction markets, Manitowoc's crane sales slipped nearly 9% year over year during the nine months through September, thanks to weak demand for rough-terrain cranes and boom trucks. These off-road crane products are primarily used by refineries and petrochemical plants for energy projects. While Manitowoc cranes serve several end markets, energy ranks among its primary markets, as evidenced below. 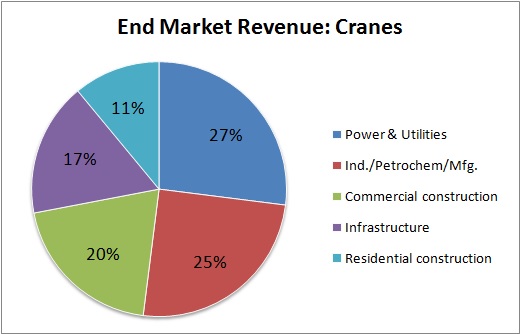 Sluggish demand from the oil and gas industry has already been exerting pressure on Manitowoc's top line for some quarters now. If oil companies hold back projects, rough-terrain crane sales could screech to a halt, leaving Manitowoc in a lurch.

What's worrisome is that despite a single-digit drop in crane revenue over the nine months through September, Manitowoc's crane operating profits slumped 28% year over year, suggesting that off-road cranes are also high-margin products. In other words, soft sales for this product segment could hit the company's bottom line hard. That's not what investors want to see, especially when Manitowoc is already having a hard time keeping up with its huge debt load and low cash flows.

Risks that investors face
Between the two companies, Caterpillar could be more vulnerable to oil price fluctuations since E&T is its most important business right now in terms of profitability. Manitowoc still has a relatively stable foodservice business to fall back on. Moreover, savings at the pump as a result of low oil prices could spur consumer spending and business for restaurants. Growth at Manitowoc's foodservice business depends heavily on the health of the restaurant industry.

That said, both companies have considerable exposure to the energy sector, and neither can escape the brunt of falling oil prices. As an investor, you need to be cautious.