A stock doesn't hit a 52-week low without a good reason. IBM (NYSE:IBM) is one such stock, which has slumped 13% over the past year to what is, in fact, a three-year low. Big Blue's dismal sales growth and muddy plans for its future have caused many longtime investors to flee, but contrarian investors might think of IBM as an undervalued income stock. After all, it trades at less than 10 times forward earnings and pays a forward dividend yield of 2.7%. 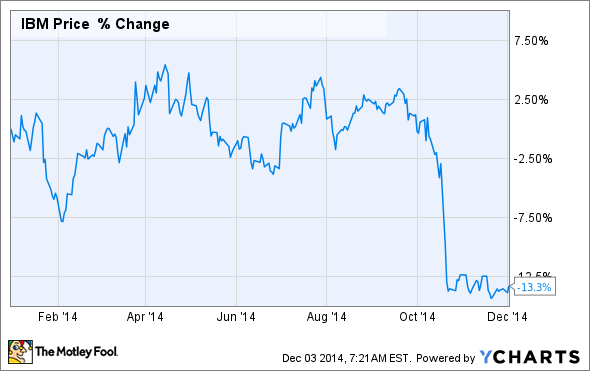 While its possible that value-minded investors may find IBM intriguing, it seems likely that this may be the beginning of a much deeper slide. Here are three reasons why shares of IBM should be avoided-not embraced.

A big part of this plan was stock buybacks. However, IBM funded its stock buybacks with debt, which resulted in its annual long-term debt spiking 52% over the past five years. During that period, IBM's trailing 12 month stock buybacks surged 324%. Over the past 12 months, IBM spent $18.6 billion on buybacks, versus its free cash flow of $13 billion during the same period. Again, this was cash which could have been reinvested in acquisitions and new projects. But by doing so, IBM decreased the amount of outstanding shares, thus artificially inflating its earnings per share toward Palmisano's promise.

2. Dismal growth
Those buybacks, along with IBM's divestment of its lower-margin businesses (PC, x86 servers, U2 database, customer care, and others), boosted its net income and earnings per share, but its top line growth stalled out.

That was the trade off -- lower margin businesses generated more revenue in the past, but they were weighing down earnings. Margins and earnings improved, but without the additional revenue from those business segments, IBM became less diversified and more vulnerable to the fluctuations in its remaining businesses. 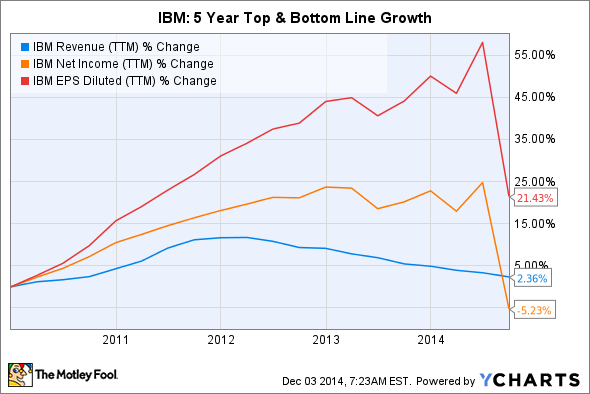 Last quarter, revenue at IBM's global services segment -- which accounted for 61% of sales -- slipped 3% year-over-year. Its backlog fell 7% as nimbler rivals like Accenture (NYSE:ACN) disrupted its business services market. Software revenue, which accounted for 25% of sales, fell 2% as demand for its middleware products waned. IBM's revenue from continuing operations fell 4% year over year as net income plunged 17%. IBM must find new ways to generate fresh top line growth, or these declines will worsen.

3. The cloud isn't growing fast enough
One such source of growth is its higher-margin cloud business, which it should have aggressively expanded years ago.

IBM spent billions on acquisitions over the past five years, but out of its 23 main acquisitions between 2010 and 2011, only two (Cast Iron Systems, $190 million, and DemandTec, $440 million) were made to expand its cloud based business. The others were mostly focused on horizontal growth for its business software segment.

Under Rometty, who took over in 2012, cloud-based inorganic growth has accelerated. IBM acquired SoftLayer Technologies last year for $2 billion, then invested another $1.2 billion to expand its data centers. It also spent $1 billion on creating a new business for Watson, its AI platform, to help analyze cloud-based data.

Over the past two months, IBM won three billion dollar plus contracts -- an IT contract with German airline Lufthansa (OTC:DLAK.Y), a computer infrastructure deal with Dutch bank ABN Amro, and a cloud deal with WPP, the world's largest advertising firm. In the Amro deal, IBM will migrate the bank's servers, storage hardware, and other technology into a private "hybrid cloud" installation. Hybrid cloud installations, which are built on top of older on-site technologies, are expected to be used by 50% of the largest U.S. companies by 2017, according to Gartner.

Foolish Takeaway
Those deals are encouraging, but IBM's cloud-based services still only account for a tiny sliver of its overall business. Last year, IBM's $4.4 billion in cloud service revenue only accounted for 4.4% of its top line. This means that it will be very tough for IBM's cloud business to grow fast enough to offset losses from its services and software divisions.

Looking ahead, there just aren't enough catalysts and too many hurdles for IBM to overcome. Moreover, investors will also have to wait until next year for an updated outlook for 2015. Until that happens, Big Blue's future will remain murky.