Thought to be fading away in Illinois, nuclear power might soon retake its leadership role in the market. Image source: Bill & Vicki/Flickr.

Despite enabling power generators and electricity distributors to avoid virtually any carbon dioxide emissions, nuclear energy has found it difficult to compete with cheap and abundant natural gas, wind, and even solar generation. That fact has not been lost on energy investors when it comes to Exelon (NASDAQ:EXC), which happens to be one of the world's largest providers of nuclear energy. The company offers a dividend yield hovering near 3.5% thanks to a robust portfolio of low-cost generation, with nearly one-third of its assets allocated to natural gas, wind, and solar sources; but that has done little to quell concerns over the fact that 55% of its generation is derived from nuclear power.

I've long dreamed of what would happen if Exelon could somehow monetize the intangible value of its low-carbon nuclear fleet, but carbon taxes aren't very popular and carbon trading programs have been difficult to implement and enforce. However, that appears very likely to change in 2015. The state of Illinois, where 62% of the company's nuclear fleet representing 34% of its total capacity resides, will consider enacting two pieces of legislation that could increase the tangible value of nuclear power -- and keep one of the state's most important taxpayers and employers happy.

What's the problem?
Illinois in 2007 enacted the Renewable Portfolio Standard, which required that 25% of the electricity supplied to the state come from renewable energy sources by 2025. However, the state was criticized by environmental activists -- and Exelon -- for promoting unprofitable wind and solar capacity while ignoring other sources of low-carbon energy. The criticism was well deserved.

To accommodate the mandate, power suppliers shunned their usual utility customers, such as Exelon subsidiary Commonwealth Edison, in favor of wind and solar upstarts in the region. The anti-competitive behavior led to negative power prices during certain times of day from an oversupply of wind power, which forced Exelon to pay grid operators to take power generated from its nuclear fleet -- 8% of the time from one facility in 2012. Zooming out provides a similarly dismal picture. The Chicago Tribune earlier this year analyzed Exelon's nuclear performance and found that none of the company's six nuclear power plants in the state had been profitable since 2008 -- not exactly what investors want to hear.

What's the potential solution?
The state legislature might agree to a solution as early as 2015. Instead of a Renewable Portfolio Standard that only favors wind and solar sources, the proposed Clean Energy Standard would include all low-carbon energy sources, including nuclear. It would make for a more competitive market and more accurately reflect recent regulatory efforts to clamp down on carbon dioxide emissions.

In addition to the Renewable Portfolio Standard, Illinois is considering creating a carbon trading program or joining the existing Regional Greenhouse Gas Initiative. Such a program would cap the allowable emissions from fossil fuel generators, gradually lowering the ceiling until a long-term target was met. Generators would submit an allowance (essentially a certificate) for every metric ton of carbon dioxide emitted, which would then be auctioned off with proceeds going to the state. Funds could be distributed to new energy projects or used to subsidize clean-energy sources such as Exelon's ailing nuclear facilities, which would never have to worry about paying into the program. Essentially, it would enable the company to monetize the intangible value created from avoiding carbon dioxide emissions and offset higher production costs from older facilities.

To summarize, the proposed Clean Energy Standard would help Exelon fight back against overly subsidized renewable energy projects in the region, while the proposed carbon trading program would help close the gap between nuclear power and natural gas generation. Not a bad outcome for shareholders, but how likely is it?

What are the chances that the laws pass?
Investors should feel highly confident that the Clean Energy Standard will be signed into law in 2015, although it might not be enforced immediately. How can you be so sure? Just remember that Exelon has all the power, both literally and figuratively. 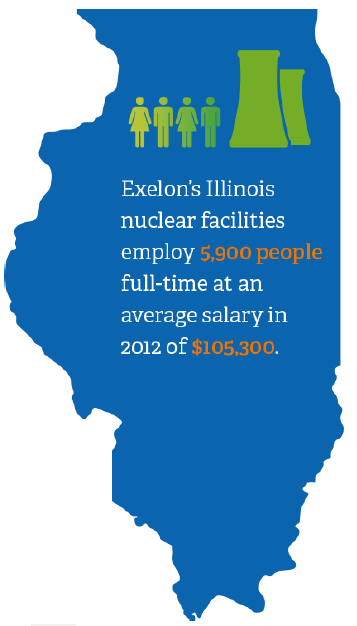 In other words, state legislators are highly incentivized to pass the Clean Energy Standard next year and throw Exelon a bone. After all, the amendments were first proposed after the company threatened to shut down nuclear facilities in late 2013 and early 2014.

There is also a strong incentive for state representatives to enact a carbon trading program, especially with the new federal carbon dioxide emissions limits, but this is more susceptible to political battles than the Clean Energy Standard.

What does it mean for investors?
It might be difficult to remember, but going back to  2008 nuclear power was actually very competitive with renewable energy and fossil fuel generation. A lot has happened since then, with the cost of wind generation falling precipitously and the emergence of abundant natural gas changing the dynamics of fossil fuel power sources. However, the two-front attack on nuclear power doesn't account for the value provided by the steady baseload power source (something wind cannot do yet) that also avoids carbon dioxide emissions (something fossil fuels cannot do yet).

Simply put, the market isn't set up to promote low-carbon energy, which is why federal and state regulations are needed initially to tip the scales. Given the importance of Exelon to the state of Illinois both economically and environmentally, it seems likely that at least the Clean Energy Standard will become law in 2015. That will help the company sell its nuclear power more easily and more profitably by normalizing purchasing from utilities, which should help calm investors and boost profits in the near term. The introduction of a carbon trading program would help the company further monetize the value of its low-carbon energy fleet. Who knows, maybe Exelon will be able to increase its dividend above 4% again.