Things are looking up for Intel (NASDAQ:INTC). Concerns that the market for personal computers would continue to erode at rates in line with the massive 10% decline that occurred in 2013 have lessened in light of smaller contraction this year and expected growth in 2015. The company anticipates favorable trends in PCs and double-digit growth in data centers will propel it to record revenue of $55.8 billion this year. Intel also issued mostly promising targets for 2015 at its Nov. 20 investors meeting, and announced a dividend raise, which was especially notable because the company's payout had remained flat for 10 quarters. The company raised its annual cash dividend to $0.96 per share, a 6.7% increase that has the stock yielding roughly 2.5% at Friday's closing stock price. Intel's stock has grown roughly 38% in the last six months, hitting 10-year highs. 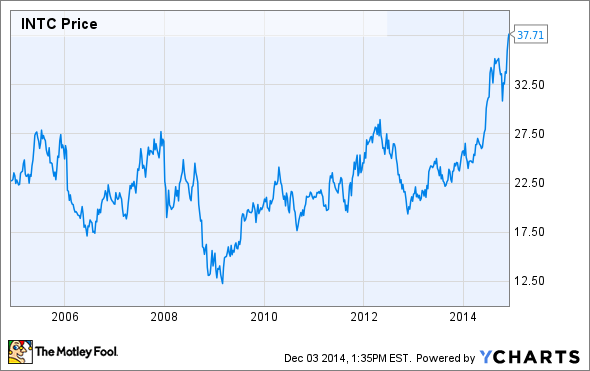 Intel's last fiscal year saw more than 62.5% of its revenue generated from its Personal Computing Client Group segment, and it's not shocking that improved outlook for personal computers has boosted the company's valuation. Even so, the company believes the line between PCs and mobile devices is becoming increasingly blurred in a way that could detract from its most important segment, and it's fighting an uphill battle to secure a bigger presence in tablets, phablets, and phones. Will Intel engineer a successful push into mobile and score big wins against competitors like Qualcomm (NASDAQ:QCOM) and ARM Holdings?

What does the road to success in mobile look like for Intel?
Intel's success in mobile comes down to creating a large enough base for its products to benefit from production scaling. The chip business heavily favors companies with established positions. Qualcomm certainly fits that description in mobile, and accounts for about two-thirds of mobile baseband revenue, while Intel is in the midst of spending itself into a sustainable position.

At Intel's recent investor's meeting, CEO Brian Krzanich reiterated that the company was on track to meet its goal of shipping more than 40 million mobile chips this year. This represents impressive growth, as Intel shipped just 1 million tablet chips in 2012 and 12 million tablet chips in 2013, but it has come at a cost. Last quarter saw Intel's mobile division record losses of $1.04 billion on revenue of just $1 million. Losses from mobile and wireless are expected to hit $4 billion this year, up from $3 billion in 2013 as the company continues to offer manufacturers like Asus and Lenovo subsidies to increase presence in the Android ecosystem. Krzanich has stated that Intel aims to build its position in smartphones without using the same degree of subsidies and loss-leading it has employed with the tablet market.

Obstacles to building a strong mobile position
The fact that its mobile competitors are so entrenched is one of the biggest challenges Intel faces in cracking the market. Qualcomm and its competitor MediaTek currently claim roughly 80% share of the mobile baseband market, and the widespread use of ARM designs and iterative nature of technological progression represent a major hurdle.

Apple and Samsung accounted for 35.4% of smartphone unit sales in third-quarter 2014, according to IDC, so the size of the addressable market is a concern even as handset competition increases. Intel could score a win by getting inside Microsoft's Windows Phones, which Gartner projects could hit 10% market share in 2018, but building a large share in smartphones would still be largely dependent on getting inside iOS and Android devices. Apple is currently partnered with Qualcomm for iPhone 6 chips, and reports suggest Samsung will manufacture 80% of Apple's A-series chips in 2016, and will also build 14-nanometer FinFET chips for Qualcomm and Advanced Micro Devices.

Samsung is using Intel chips for devices like the Chromebook 2 and Galaxy Tab 3, and the two companies have partnered to develop technologies for reducing the cost of 4K televisions and setting standards for the Internet of Things, but the South Korean company's position in mobile devices and chip manufacturing could make it difficult for Intel to get chips in a large number of Android devices. Intel will have to leverage its research and manufacturing strengths to create chips that are too performance- and cost-efficient to reasonably turn down. It already has compelling prospects with its SoFIA chips for low-end devices, with 3G versions shipping early next year, and LTE versions shipping mid-to-late 2015. These chips will be manufactured by TSMC on its 28-nm process until some point in 2016, when Intel will takeover production and introduce 14-nm versions of the SoFIA line. The SoFIA chips give Intel a window of opportunity in low-end devices, but the high-end market looks tougher to crack.

Why Intel could eventually win in mobile
Intel's manufacturing expertise and research and development spending could give the company a significant advantage over competing chip makers in coming years, particularly as holding to Moore's Law, scaling looks to become more difficult and resource-intensive. 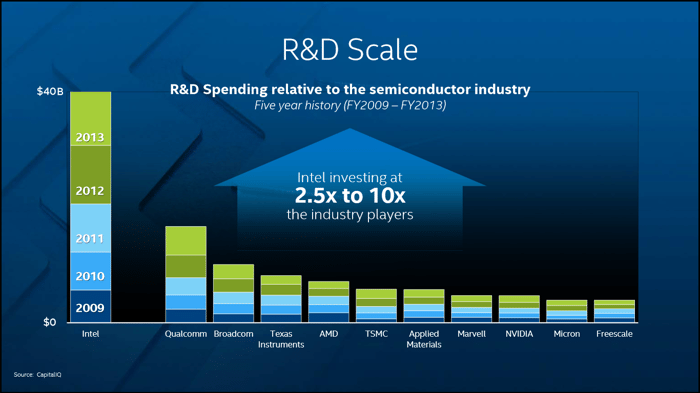 As the above slide from Intel's investor meeting shows, the company's R&D spending dwarfs that of its competitors. Granted, Intel's business is more diverse than these other companies, but the company cites approximately 75% of its research costs as being shared, meaning the benefits are felt across segments and products. Shared IP across products is a major aspect of the company's integration drive, and the benefits of this strategy should start to become more apparent in mobile.

The company anticipates an increasing number of devices making use of chips with built-in modems, so the spending it's doing to build a mobile position also looks to be beneficial in its emerging Internet of Things business, as well as segments like security and wearables. Soaking up more losses to win contracts is likely a prerequisite, but if Intel can get the ball rolling, it has a fair shot of becoming a formidable player in mobile within the next five years.