The crash in the price of oil is forcing energy companies to take a hard look at new oil and gas projects. Energy companies know these projects will take years to complete and are needed to offset the depleting oil fields that were brought online years ago. Furthermore, oil prices could be much higher when these projects finally deliver first oil. However, at today's oil price many of these projects do not make economic sense, which makes it tough to make a final investment decision to spend billions of dollars on any given site. This situation could cause upward of $150 billion in oil projects to not get the green light next year, Reuters reported.

Oil companies are considering final investment decisions on roughly 800 oil and gas projects around the world that would require $500 billion in future investments. These projects represent nearly 60 billion barrels of oil equivalent, which is nearly twice the size of America's total proven oil reserves. However, at a price of $70 per barrel, about half of this oil would be uneconomical.

That said, energy companies do look past the current price to forecast where oil might be in the future to get a better idea of the cash flow they will have at their disposal to fund these projects. The current forecast is that oil prices will be in the low $80s next year. However, even then about a third of the spending is unlikely to be given the green light, which is why at least $150 billion of investments could be put on hold.

What's at risk?
Heavy oil is at particular risk because of the size of the investments required to bring new oil projects online. The greatest risk of delays in heavy oil projects are in areas such as the Canadian oil sands and Venezuela's heavy oil fields. In Canada, new oil sands mining projects were already at risk of being postponed due to pipeline delays that caused Canadian oil prices to sell at a discount. This caused the $11 billion Joslyn oil sands mine by partners including Suncor Energy (NYSE:SU) and Total (NYSE:TTE) to be deemed uneconomical. Now that oil prices are even lower, more projects could be pushed back.

The other high-cost development area in which many future projects are at risk is offshore drilling. The Reuters report noted that Chevron's (NYSE:CVX) $10 billion North Sea Rosebank project, which has already been delayed for several years, still might not get the go-ahead, as even at $100 per barrel the project's economics aren't very compelling. However, that is just one of the many multibillion dollar development projects across the company's portfolio, as shown on the following map, so Chevron could afford to wait. 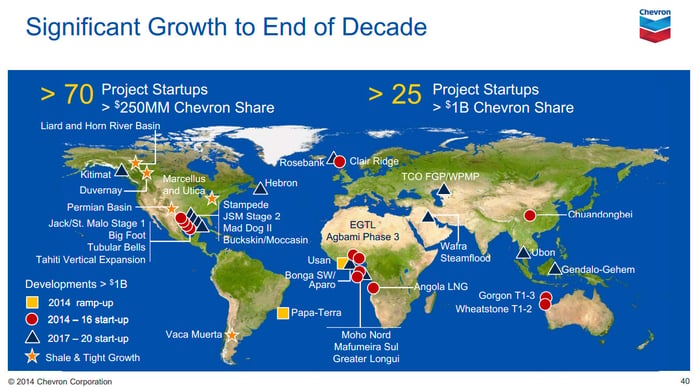 Meanwhile, Norway's Statoil (NYSE:EQNR) has already postponed its final investment decision on the $5.7 billion Snorre field by six months, with that decision now expected in October of 2015. In addition, the company recently canceled a rig contract to drill exploration wells in Angola after disappointing results. The rig cancellation alone cost the company $350 million. The Wall Street Journal reported that Statoil is idling three oil drilling rigs at least until the end of the year as it looks to reduce expenses and prioritize drilling targets. These cost-cutting moves don't bode well for new projects getting the green light and suggest the Johan Castberg field, which is expected to cost $16 billion-$19 billion, might see its final investment decision delayed next year. Clearly, Statoil is being careful in today's environment, which could lead it, and many of its peers, to pause bigger projects until there is more certainty in the oil market.

Investor takeaway
Unless oil prices quickly recover, we'll likely see several major oil projects have their final investment decision delayed next year. Even before the sell-off in oil, a number of project had been pushed back because of the massive cost overruns and construction delays from previous big-budget projects. All that being said, the world will one day need these projects to come online because today's operational oil fields won't produce forever. For that reason, alone oil prices will need to rise substantially, or the cost of major projects will need to plummet, so that oil companies can earn an economic return on these future developments.