Please ensure Javascript is enabled for purposes of website accessibility
Log In Help Join The Motley Fool
Free Article Join Over 1 Million Premium Members And Get More In-Depth Stock Guidance and Research
By Dan Caplinger - Dec 9, 2014 at 10:14AM

The soaring railroad industry has taken a step back, but better news is on the way for the sector.

Railroad companies have seen huge gains in recent years, as the entire industry has pulled back from the edge of obsolescence to retain its role as a key element of the nation's transportation network. As fuel costs for trucking and other less-efficient modes of transportation rose, railroads became the cost-effective alternative, lifting shares of Norfolk Southern (NSC) and peers CSX (CSX) and Union Pacific (UNP) in the process. Yet Norfolk Southern has given back some of its long-term gains in the past month, with some investors looking nervously at the potential impact of lower energy costs on the company and the industry. Let's take a closer look at Norfolk Southern to find out why now might be a good buying opportunity for investors who missed the long run-up in the railroad stock.

Plunging energy, huge cost savings
One of the biggest single expenses for any railroad is fueling its locomotives. Norfolk Southern's fuel costs amounted to almost $1.23 billion during the first nine months of 2014, accounting for more than a fifth of its overall operating expenses. That number also rose by $17 million from the same period in 2013.

Yet the fall in energy costs has already had a positive impact on Norfolk Southern's fuel expenses. In its most recent fuel expense analysis covering the first nine months of 2014, the company noted that increased locomotive consumption of higher volumes of fuel contributed to an increase of $43 million in fuel costs, as the higher amounts of cargo that Norfolk Southern has shipped forced it to buy greater amounts of fuel. Yet the declining price of fuel offset those higher costs by $31 million.

The trends appear even more favorable when you look at just the most recent three months. Fuel costs actually fell $3 million in the most recent quarter compared to the third quarter of 2013, even though Norfolk Southern's locomotives needed $16 million more in fuel to move freight than they did last year. A drop in per-gallon fuel costs helped Norfolk Southern save $21 million -- a significant piece of the $387 million in total fuel costs the railroad had in the third quarter. 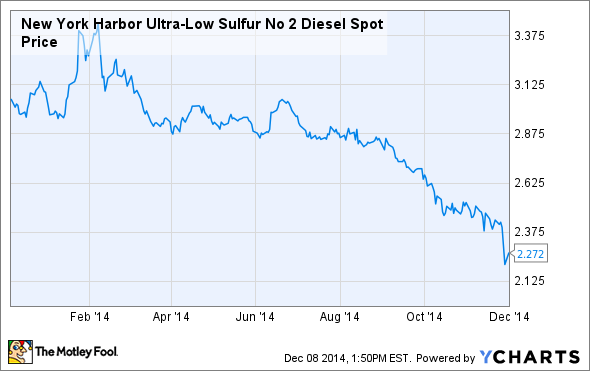 Moreover, these trends could be much more substantial this quarter. In the third quarter, Norfolk Southern's average fuel price was $2.96 per gallon, which reflects only a small markup from spot prices for diesel at the New York Harbor market. Yet since September, those spot prices have fallen from about $2.85 per gallon to just $2.27. A similar drop in Norfolk Southern's fuel costs would lop 20% off its expenses and go straight to its bottom line. That would amount to roughly $77 million in the fourth quarter, or about $0.25 per share. An extra $1 of per-share earnings each year could add $15 to $20 to Norfolk Southern's share price at current multiples.

Trains are moving backward
Yet lately, Norfolk Southern and its railroad peers have seen their share prices move in the wrong direction. In just the past two weeks, Norfolk Southern has fallen more than 11%, while CSX and Union Pacific have also suffered large, if less extreme, declines. 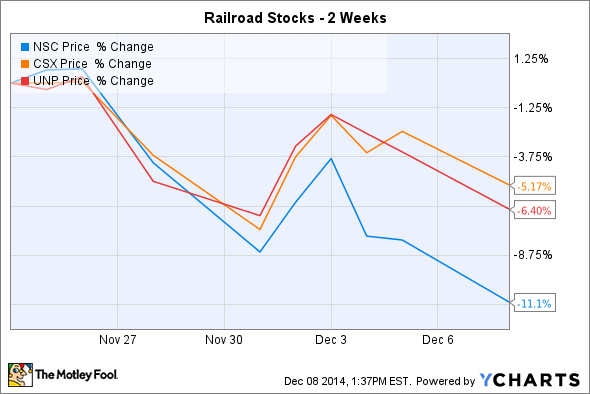 Norfolk Southern's main uncertainty right now is what impact falling crude oil prices will have on demand for the commodities it transports. On one hand, coal remains a vital part of Norfolk Southern's overall shipping volume, and lower oil prices will likely force coal prices to follow suit. Given the difficulties that coal producers have already had in sustaining demand, further pressure could push some marginal producers over the brink, leading to declines in shipping volumes and lost revenue for railroads, especially Norfolk Southern and CSX in the coal-rich Appalachian region.

At the same time, crude oil itself has become an important commodity in Norfolk Southern's shipping portfolio. If oil and gas producers respond to falling prices by pulling less oil out of the ground, that also could hurt Norfolk Southern. But if they pump more oil to cover cash flow needs, then Norfolk Southern and its peers could see greater amounts of business ahead.

Is this the time to buy Norfolk Southern?
If you believe Norfolk Southern can cash in on lower fuel costs without losing too much of its energy-product shipping business, then the recent decline in the company's share price could be the best gift you'll get this holiday season. With many investors believing the potential fallout from lower coal and crude shipments could outweigh any positive impact, though, you need to be resolute in your convictions and watch closely to see any future impact on Norfolk Southern's broader business.