Let's look at these two payouts to see which one is the better bet for investors.

Differing distribution deployments
As can sometimes be the case among competitors, the dividend yields of Wynn Resorts and Las Vegas Sands are roughly the same (the former has the slight edge here, at 3.7% versus 3.4% as of this writing).

The way they pay out their respective distributions is different, though. Las Vegas Sands generally hews to a conservative model, paying a set amount every quarter. This has been lifted once every year from the initial $0.25 per share in 2012, to $0.35, to the current $0.50, and to $0.65 starting in 2015. Only once did the firm declare a special dividend ($2.75 in late 2012).

Wynn's return, on the other hand, depends on specials. These rather varying amounts have been issued regularly at the end of the company's year, while in the other three quarters the firm pays a steady, consistent distribution. 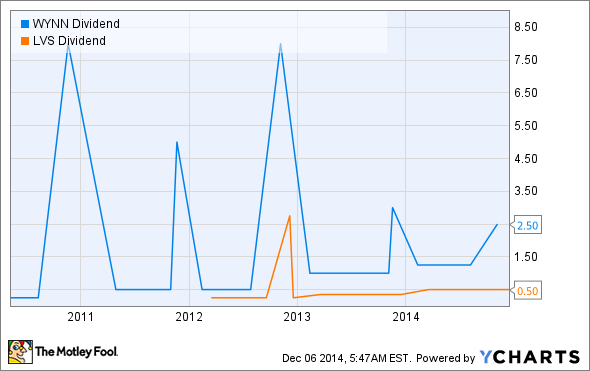 Gambling fever
Wynn makes it a point to ramp up its payouts seemingly as high as possible. In the nine months ended Sept. 30 (the period that does not include the special dividend), the company paid out just over $690 million in dividends -- considerably higher than the $267 million it had in free cash flow during the period.

In the same time frame of 2013, those numbers were much more favorably proportioned -- $632 million and $957 million, respectively.

The company doesn't say much about its dividend policy, so it's hard to guess its motivations for running it this way. Regardless, investors should be a bit wary of such a difference in the figures; after all, it's hard to keep a high dividend flowing if the fundamentals aren't commensurately strong. More on this in a moment.

Las Vegas Sands lives within its means more consistently. This year, nine-month free cash flow totaled $2.8 billion, with dividends paid coming in at just under $2 billion. Those figures for the same period the previous year were more conservative -- $2.6 billion and $1.3 billion, respectively.

Betting on the East
In terms of operations, Las Vegas Sands draws the great bulk (86%) of its net revenue from its strong presence in Asia, specifically from its four properties in the formerly red-hot Chinese enclave of Macau. The operator also has one very busy, 2,600-room resort in Singapore, from which it drew 21% of its total net revenue this past quarter.

Thanks to a recent anti-corruption crackdown that affected Macau's high-end gamblers, the enclave has seen a pronounced slowdown of late, which has negatively affected the fundamentals and, consequently, the shares of operators involved there. But the changes that should result from the initiative will likely shift the key target demographic from free-spending VIPs to the much larger mass market. Since Macau is China, that mass is massive. And despite recent hiccups, the nation's economy is still growing, so we should expect the enclave to come roaring back.

Wynn was a bit late to the Macau party (opening shop in 2006, as opposed to Las Vegas Sands' 2004 debut),and it's got no operation in Singapore.

In Macau, Wynn is currently constructing Wynn Palace, a 1,700-room behemoth that will eclipse the 1,000 room count at its two existing resorts in the enclave. That's not expected to open until the first half of 2016, though, and will eat up a total of around $4 billion in investment.

Another promising effort is the company's project in the Boston suburb of Everett. Like Wynn Palace on the other side of the world, though, this comparatively small resort isn't anticipated to open until late 2017 and it'll cost -- $1.6 billion is the current budget.

The winner is ...
So in the opinion of this Fool, Las Vegas Sands is in the stronger position in terms of current operations and future potential, on the back of its commanding presence in Macau plus its resort in the somewhat unnoticed gem of the Asian market, Singapore.

Wynn certainly has potential with its Macau Palace, however, the dominant U.S. company in that market will remain Las Vegas Sands.

Meanwhile, the Wynn's stateside ambitions for its Boston-area project are more focused on building a grand luxury hotel than a gambling destination. It'll be interesting to see how that plays out, but it's too unproven a strategy to rely on for massive revenues (besides, the complex will be small relative to the typical Wynn or Sands resort).

I also feel that of the two companies, Las Vegas Sands is more careful with its cash, refusing to spend lavishly on the dividend. Yet it still pays a respectable amount with an attractive yield at the current stock price. For me, then, its dividend is the one I'd place my bet on.