Rooftop space is among the most wasted space in the country, but solar energy is quickly changing that.

According to the National Renewable Energy Laboratory, if all of the residential and commercial rooftops were covered with solar panels the U.S. could produce 819 TW-hr of electricity annually, or about 22% of what's consumed every year.

The only change that would be necessary is turning unproductive assets into productive, power-generating assets.

Across the country, rooftops are being turned into power-generating assets, and the biggest change has come in Corporate America. Wal-Mart (NYSE:WMT) has been the quickest to go solar, with 105.1 MW installed, on its way to being 100% renewable by 2020.

Kohl's, Costco, Ikea, and Macy's are also among the biggest commercial solar installers. It's no coincidence that they're among the largest retailers in the country, which comes with an immense amount of rooftop space. 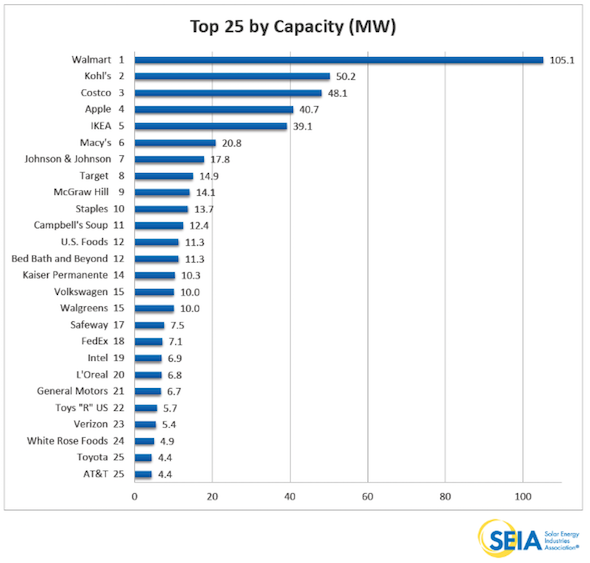 The other trend is tech companies using commercial space around data centers to produce solar electricity to power operations. Apple has moved fastest to go solar but Intel, Verizon, and AT&T are also among the top 25 solar installers in Corporate America.

Who is leading the solar charge?

There are a lot of solar companies looking into the commercial space, but SolarCity (NASDAQ:SCTY.DL) and SunPower (NASDAQ:SPWR) are two of the largest. SolarCity recently introduced ZS Peak for commercial rooftops and ZS Beam for parking lot installations. It's working with partners such as Wal-Mart, Tesla Motors, and Google for solar installations.

One company that I think has incredible potential in commercial solar is SunPower, which makes the most efficient solar panels in the world. Higher efficiency means more energy can be squeezed out of each square foot of rooftop space. When combined with the higher lifetime energy production from SunPower's panels, the cost per watt can actually be lower for customers even if the initial costs are higher. This dynamic can make for a hard sell in the residential market, but sophisticated commercial solar buyers understand the long-term production dynamics of solar panels and are willing to pay for SunPower's advantage. I recently discussed exactly that with SunPower CEO Tom Werner.

The advantage for installers is that a single contract can be for multiple buildings, meaning tens of MWs in a single deal. That compares with the typical 5 kW rooftop solar system, which is sold to each individual household.

Residential solar may get a lot of the attention in solar today, but commercial solar installations that use up unused rooftop space across the country will be a growth driver for the industry and may be an even bigger market than residential. That's big news for companies that can win business from increasingly knowledgeable customers.