A Black Friday survey shows many iPhone users weren't up to speed on Apple Pay.

Black Friday numbers are in for consumer adoption of Apple's (AAPL 2.14%) Apple Pay, and the picture isn't as pretty as many would hope.

The numbers
InfoScout, a leader in monitoring consumer habits, recently revealed the results from those in its 170,000-household panel who own an iPhone 6 or iPhone 6 Plus and shopped at a retail store that accepts Apple Pay during the Black Friday weekend.

"Despite its hype within the tech community, Apple Pay still has a lot of ground to cover," noted Ittai Barzilay of InfoScout in a blog post. "Out of all Apple Pay-eligible transactions on Black Friday, the new NFC-powered mobile payment method was used less than 5% of the time."

In addition, it wasn't just consumers' use of Apple Pay on Black Friday that was disappointing, but its overall adoption as well. In this survey, just 9.1% of consumers who were able to use Apple Pay had even tried to.

And there were a host of reasons why this was the case: 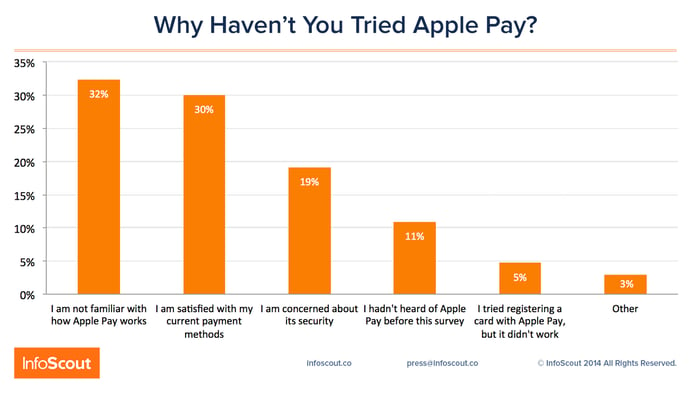 As you can see from the chart above, roughly one-third of customers were comfortable with their current means of making payments -- credit cards, cash, and others -- and the remainder were either unaware, afraid, or oblivious to what Apple Pay did, or how it even worked. This is a problem.

The problem
When Apple Pay was first announced in October, Apple's senior vice president of Internet Software and Services, Eddy Cue, said in the press release: "The reaction to Apple Pay has been amazing. We continue to add more Apple Pay ready banks, credit card companies and merchants, and think our users will love paying with Apple Pay."

Cue notes that "the reaction to Apple Pay has been amazing." But it seems that amazing reaction came from "banks, credit card companies and merchants," because Cue also said the company thinks "users will love paying with Apple Pay."

Cue was undoubtedly right about consumers loving Apple Pay once they use it. InfoScout did reveal that, of the 9% of consumers who used Apple Pay, across ease of use, speed at checkout, security, and convenience, roughly 95% felt it performed better than or the same as traditional payment methods: 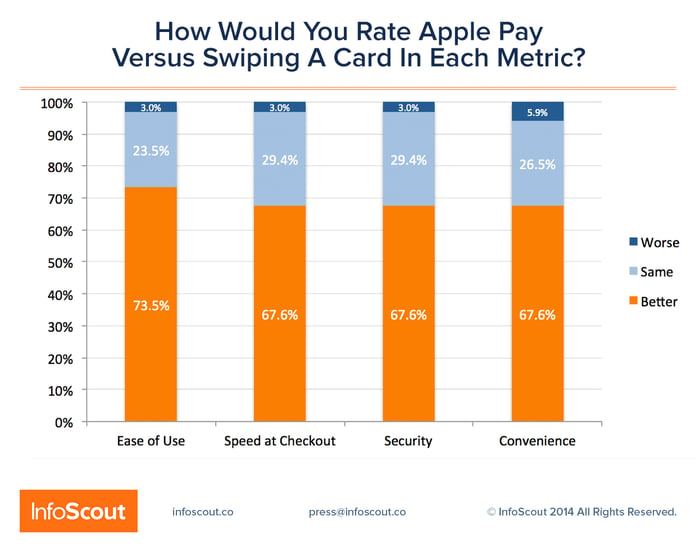 The numbers indicate that the problem here is not with the product itself, but with consumers' knowledge of it. From the perspective of consumers, not enough has been done on the part of Apple, banks, credit card companies, merchants, and others to make them aware of what Apple Pay is, how it works, and why they shouldn't be concerned when using it. Credit card companies are jumping in to advertise Apple Pay, though, with MasterCard, for instance, launching ads featuring Grammy Award winner Gwen Stefani.

The technology, capability, and accessibility of Apple Pay is unquestionable. But if Apple truly expects Apple Pay to "transform mobile payments," it needs to make consumers aware of the benefits it offers -- through advertising or otherwise. Ultimately, this enhanced awareness should lead to the delight of not only consumers, but investors as well.