Renewable oils manufacturer Solazyme (NASDAQ:TVIA) needs to quickly find traction in oil and gas well drilling activities if it will successfully execute its new commercialization strategy in 2015. As noted earlier, the company will scale back its ambitions for large production volumes going forward to instead focus on its three high margin portfolios. While Algenist cosmetics are essentially on autopilot and AlgaVia food ingredients are still developing markets, Encapso drilling lubricants will assume the role of the Goldilocks product portfolio -- the product is ready for production and the timing is ripe.

In fact, the opportunity may be heating up thanks to OPEC's attempt to squeeze margins in American oil formations, especially if the product can cut costs associated with well drilling by increasing drilling speed and protecting drilling bits. But it's too late to focus on overly bullish market potential -- investors need to understand exactly how Encapso is used, how it and Solazyme stack up to competitors, and how the drilling fluids market is actually structured. Here are seven things you need to know about Solazyme's Encapso.

1. What are drilling fluid systems anyway?

Drilling fluid systems, or muds, are added to a borehole during the construction of a well and are circulated throughout the drilling operation. While they typically only account for 10% of well construction costs, properly tailored muds can boost drilling performance metrics such as the rate of penetration, or ROP. In horizontal drilling, muds can be swapped and altered during different drilling intervals of the well, which include the vertical, the curve (when the vertical section transitions into the horizontal section), and the lateral. Each section represents unique challenges and characteristics to operators.

Muds serve critical functions, such as transporting geological debris (cuttings) to the surface, balancing pressures from gases and liquids inside a well trying to rush to the surface and collapse the borehole, stabilizing the walls of the borehole to prevent collapse, and cooling drill bits by diffusing heat. Specialty products can be added to boost performance and overcome issues specific to each well, such as clay compositions, or all wells, such as stuck pipe and personnel protection.

2. Muds are not created equally

Encapso is an encapsulated lubricant, meaning the oil acting as the lubricant remains held within inert algal cells. Drilling lubricants are added to mud systems to reduce friction between the drill bit and borehole walls, which reduces torque and increases the ROP. The faster a well can be drilled, the sooner the well can be monetized. 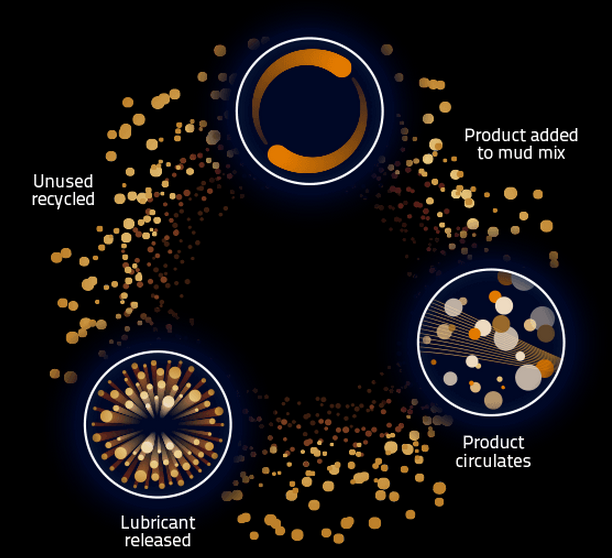 While drilling lubricants, including Encapso, have demonstrated the ability to reduce friction during drilling by up to 80%, they have the tendency to lose effectiveness due to dilution, sticking to cuttings and seeping into the formation. However, encapsulation in an inert algal cell allows Encapso to circulate freely without interacting with other additives in the mud system. The lubricant is only released when the protective shell is subjected to high pressures at the surface of the drill bit. Solazyme is hoping the unique method of action provides value to well operators.

4. Thus, Encapso is a specialty additive

By definition, that means Encapso is used in relatively low quantities and in special cases. It's impossible to determine the volume of Encapso used per well when considering the entire market, although two case studies (link opens PDF) in Colorado and Montana showed that Encapso was added at a weight of 12 pounds per barrel of drilling fluid. So how many barrels of drilling fluid are used per well?

It's complicated. The volume of drilling fluid added to a well depends on the volume of the borehole, the pressure inside the borehole, the geological composition of the formation, the amount of mud recycled during operations, and the system used, among other factors. Water-based fluids are usually used in much higher volumes than oil-based fluids, ranging from 1,000 barrels to 5,000 barrels or more. That means Encapso would be used in volumes ranging from 5.5 MT to 27 MT or more per well.

5. Encapso has been tested across North America

A quick visit to the Encapso website displays performance data in shale formations from West Texas to Western Canada. While the numbers look great and Encapso appears to add real value to drilling operations, Solazyme makes apples-to-oranges comparisons throughout the listed case studies.

For instance, the company reports a 216% increase in ROP in the DJ Basin, but compares drilling during the vertical section to drilling conducted while building the curve. Again, in the Williston Basin, Solazyme displays a 69% reduction in the measured coefficient of friction and a 17% reduction in torque. However, the company fails to state that the first improvement is compared to drilling with no lubricant at all, not a market incumbent, and the second improvement is actually being compared to the average improvement over a group of four other mud additives (including the case with no lubricant).

That may trick investors into thinking Encapso is a slam dunk specialty product, but well operators are equipped with the tools to evaluate Encapso's value proposition in meaningful terms.

6. Vegetable oil-based lubricants may be just as good

Building off the point above, data reported by Solazyme from the Williston Basin appear to show that vegetable oil-based drilling lubricants, such as Ecco-Lube from Baker Hughes (NYSE:BHI), may perform just as well when it comes to reducing friction and increasing torque. Ecco-Lube is formulated for water-based drilling fluids and contains 10%-30% vegetable oil. While the density of the product is not listed, it sells for $15.60 per gallon ($4.12 per liter) and can be shipped to a well operator in just five days. Whether or not Solazyme can compete in value creation is uncertain to me (the chart above points to one answer), but it likely cannot compete on pricing or distribution.

Consider that Solazyme expects to achieve a 50% gross profit margin on Encapso drilling lubricants. Assuming it sells for exactly the same price as Ecco-Lube from Baker Hughes, it would need to realize production costs of $7.80 per gallon ($2.06 per liter). While the density of Encapso is unknown, production costs would need to be as low as $1,370 per MT to $2,290 per MT with densities ranging from 1.5 kilogram per liter to 0.9 kg/L, respectively (being encapsulated means the density will be higher).

The encapsulated nature of the product means it gets to skip major downstream processing steps, thus saving costs, but considering that average production costs were near $6,000 per MT in 3Q14 (author calculations), reaching acceptable levels to enable profitable sales remains a tall order.

7. There is no "green premium"

You could look at safety information (link opens PDF) provided by Baker Hughes to see that Ecco-Lube is hazardous in its marketed concentration, but that doesn't mean well operators will run to Solazyme's Encapso. By now, investors should know that there is no "green premium". Products must compete with each other on efficacy and value proposition whether they're created from sustainable sources or not. In this instance, Encapso must compete with incumbent drilling lubricants offered by established service providers. Even if the product successfully reduces downtime and drilling time, well operators may not find Encapso economical if high prices wipe away any value created elsewhere.

There is a big potential opportunity emerging for Solazyme's Encapso. The first-of-its-kind encapsulated drilling lubricant has demonstrated that it can at least hang with traditional drilling lubricants. If enough well operators become customers, then tossing up to 27 MT of Encapso into a shale well could add up quickly -- and potentially lead to opportunities outside of shale basins and water-based fluids altogether.

However, investors need to be realistic, too. Solazyme must compete with (1) market incumbents such as Baker Hughes that have established relationships with well operators, and (2) traditional lubricants with proven track records in creating value. Worse yet, well operators rarely deal with chemical companies directly, preferring to work with service providers that offer multiple products. In other words, Solazyme clearly has its work cut out for it going forward, especially when it comes to profitable production. I'll continue to keep my distance from the stock until it demonstrates that it can execute on its vision or production costs begin trending to more enticing levels.